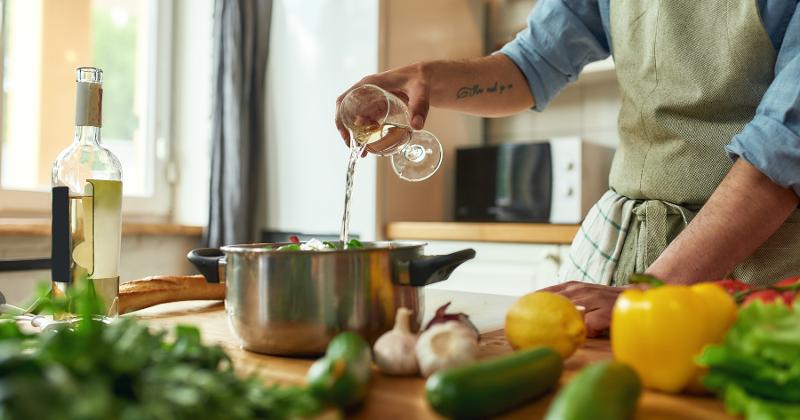 Of the trends to emerge from the pandemic, cooking at home was by and large one of the biggest, and new research from Chicory indicates alcohol is playing a larger role in that as well.

As part of its series looking at specific ingredient categories, the digital shopper marketing platform recently examined the alcohol category and found that recipes including alcohol as an ingredient have increased in popularity from February 2019 (pre-pandemic) to February 2022, showing a 17% gain in total recipe views, based on Chicory’s network of more than 1,600 recipe sites. (For its analysis, alcohol includes all variations of wine, beer and liquor.)

Recipe views of alcohol peaked during the holiday season with both 2021 and 2022 showing the largest spikes in traffic during December. Nonalcoholic beer and beverages, which Chicory said tend to trend like regular alcohol, also saw prominent spikes in recipe traffic during the holiday season. Nonalcohol beer differs, however, in that recipe views of nonalcohol beer in February 2022 were up a massive 736%, perhaps signaling the rise of the “sober curious” shopper, Chicory said in its Category Rundown: Alcohol report.

For its report, Chicory also surveyed 1,442 consumers (968 of which qualified as online grocery shoppers, defined as those who have purchased groceries digitally in the past 90 days) ages 18 to 85 about their behaviors and preferences regarding alcohol and found that liquor stores, followed by grocery stores and supercenters, are the most popular avenues for consumers looking to purchase alcohol from online or in-store. What’s more, 90% of respondents anticipate including alcohol in their grocery shopping purchases at least monthly or more.

Digital recipes and tools, Chicory noted, are also playing an increasingly important role in the omnichannel shopper’s path to purchase, with nearly 80% of survey respondents reporting that they use digital recipes and nearly one-third (28%) reporting they have increased their usage of digital shopping tools in their alcohol purchases.

Alcohol is also an impulse buy. Barbara Connors, VP of commercial insights for Kroger-owned data and media company 84.51°, noted in a recent interview with WGB that alcohol is the most popular “impulse buy” for people shopping online—the item most added to online baskets last.

Chicory found that wine, followed closely by beer, is the most popular type of alcohol among online grocery shoppers, with 43% of survey respondents selecting it as a go-to option for their household. It’s also most popular as an ingredient, with white wine receiving the most recipe views in 2021, followed by red wine and vodka. Thus far in 2022, Chicory said white wine continues to hold the lead.