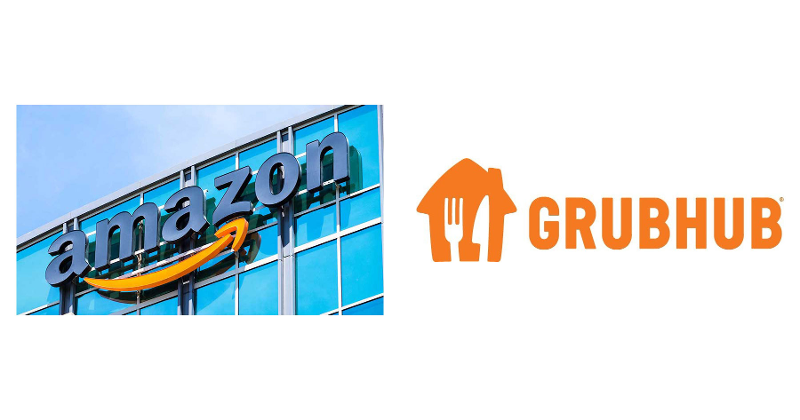 E-commerce giant Amazon could take up to a 15% stake in Grubhub under a new partnership that gives Amazon Prime members free access to Grubhub's subscription service.

Members of Prime, Amazon's subscription program, can now get a free one-year trial of Grubhub+, which waives delivery fees on orders over $12 from many restaurants.

As part of the agreement, Amazon can choose to buy a 2% stake in Grubhub for a minimal price, U.K.-based Grubhub owner Just Eat Takeaway (JET) said Wednesday. Additionally, Amazon will be able to purchase up to 13% of Grubhub shares at a "formula-based price" depending on how many new customers the partnership delivers to Grubhub.

The deal could drive significant adoption of Grubhub+, which gains exposure with Amazon Prime's audience of more than 200 million paying members. The move also comes at a pivotal time for Chicago-based Grubhub, which was acquired by JET last summer. Its new owner has been looking for a strategic partner or buyer to help grow the company as it struggles with declining sales and order volumes. Even with the Amazon partnership, JET's search is ongoing: The company said Wednesday it "continues to actively explore the partial or full sale of Grubhub."

Amazon itself has been floated as a potential player in such a deal. Cat Rock Capital, a JET investor, has suggested that the company sell Grubhub to an online grocery retailer like Amazon, Walmart or Instacart (which recently rebranded its membership program, offering free delivery on orders more than $35, as Instacart+).

Selling to a bigger delivery player with an established presence in grocery, Cat Rock argued, could help Grubhub better compete with the likes of DoorDash and Uber Eats—rivals that got their start in restaurant delivery but have since expanded to grocery. DoorDash earlier this year debuted delivery from BJ's Wholesale Club and launched 30-minute express delivery in partnership with Boise, Idaho-based Albertsons Cos.; that service is available at more than 330 Albertsons banner stores in more than 20 U.S. cities. (Uber Eats, too, inked a delivery deal with Albertsons last year.)

DoorDash also last August debuted a new feature, DoubleDash, that lets customers combine items from multiple nearby stores—including the company's own DashMart concept as well as retailers such as Walgreens and 7-Eleven, and even, in select markets, restaurants—into a single delivery order.

Grubhub CEO Adam DeWitt, in a statement, didn't allude to any possible business-line expansions. "Amazon has redefined convenience with Prime, and we’re confident this offering will expose many new diners to the value of Grubhub+ while driving more business to our restaurant partners and drivers," DeWitt said. Back in February, Grubhub announced plans to join the ultrafast grocery delivery race through a partnership with ghost grocer Buyk, but that deal crashed when Buyk was forced to cease operations following Russia's invasion of Ukraine.

JET said it expected the Amazon Prime agreement to have a neutral impact on Grubhub's earnings and cash flow this year, but it will become accretive in 2023 and beyond. The partnership will renew each year unless Amazon or JET decides to cut it off.

Amazon said the new perk is its way of saying "thank you" to members. "The value of a Prime membership continues to grow with this offer, and this year is shaping up to be a great time to enjoy the convenience, savings, fun—and deliciousness—that membership provides," said Jamil Ghani, vice president, Amazon Prime, in a statement.