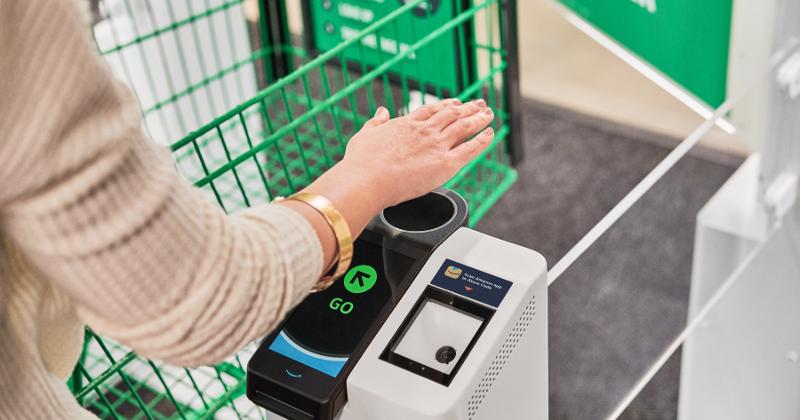 The 35,000-square-foot Huntington Amazon Fresh opened June 2 at 6911 Warner Ave., near a Stater Bros. Markets (0.3 miles down the road) and a Sprouts Farmers Market (0.2 miles away). It brings to the area two tech advancements Fresh is becoming known for: Just Walk Out Shopping and Amazon One.

Both shopping methods offer a checkout-free experience; customers simply scan a QR code in the Amazon app, their palm for Amazon One or insert a credit or debit card to open the Just Walk Out gates and begin their shopping. After completion, shoppers scan or insert their entry method again to exit and a receipt is sent to their phone.

The technology has even made its way into Whole Foods Market, another banner of Seattle-based Amazon. The first Whole Foods to feature Just Walk Out opened in February in Washington, D.C. The Glover Park neighborhood store also offers Amazon One capabilities, which Amazon has noted is a point of expansion for the Whole Foods banner.

On May 19, Whole Foods stores in Silver Lake and Irvine, Calif., become the first in the Los Angeles area to introduce Amazon One as a payment option. Shortly before that,the palm-recognition service became available at a Manhattan West Whole Foods in New York. Whole Foods locations in the Seattle and Austin areas also offer the palm-payment option.

As Whole Foods contends with foot-traffic shortfalls, WGB asked Ethan Chernofsky, VP of marketing for Placer.ai, if Amazon One, Just Walk Out and Amazon’s other tech advancements can help bring customers back into stores, to which he said, “I think it's one of these elements that is nice, [and] I'm sure will evolve and improve over time, but I don't think at the moment that it's the big difference-maker for how someone's choosing where to shop.”

Rather, Chernofsky said, Whole Foods “needs to decide who it wants to be. If it wants to be the version of itself that it was—very oriented towards higher-end products, really high-quality, very focused on kind of cutting-edge food.”

And while the tech is becoming synonymous at both Amazon Fresh and Whole Foods, it is that value equation that is differentiating the two Amazon banners. Amazon consistently describes Fresh as a “low-priced grocery store,” touting 15-cent bananas, 89-cent freshly baked bread, $1.99 baked pizza slices and $4.97 rotisserie chickens.