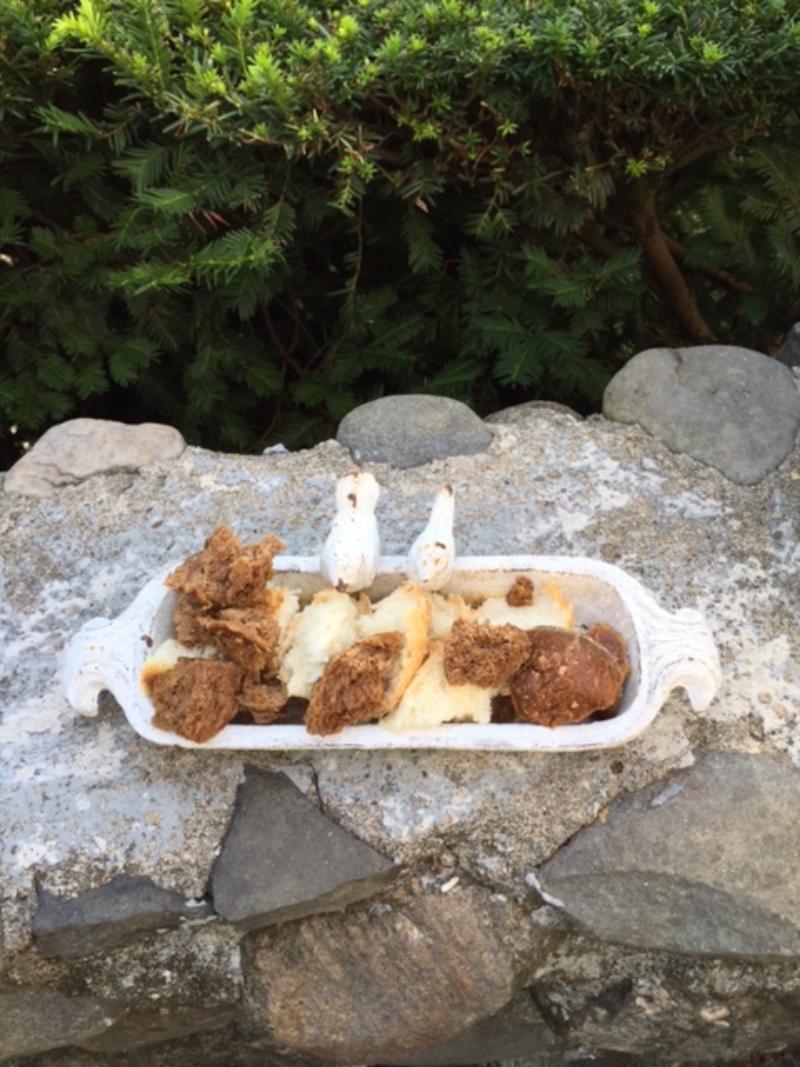 The Millennial sparrows inhabiting the formal English yews in front of my house are too busy with their incessant tweeting to go out and hunt for worms and bugs – or even eat regular birdseed – like their ancestors did. So I have to go out and buy them expensive pre-shelled birdseed at a pet specialty store so they can quickly eat and tweet on the run.

Because of the high cost, I have been supplementing the hull-less seeds with stale bread, loaves ends, old cookies and crackers. I have to admit the birds go absolutely crazy over it, attacking the little cast iron birdfeeder on my porch the minute I walk away. When I peer at them from my window I feel like I am in a scene from The Birds.

I was grocery shopping the other day, passing by the in-store bakery department when I realized another missed opportunity for supermarkets. While some supermarkets donate unsold baked goods to soup kitchens and food pantries at the end of the day, the majority put a big yellow sticker on them and mark them down 50 percent.

The problem with this concept is that the mark-down rack is usually in an obscured alcove in the corner of the bakery department, or down that dark hall past the meat department leading to the back stockroom and those restrooms that you really don’t want to use unless it’s an absolute emergency.

I propose supermarkets take their bakery mark-down racks and move them to the middle of the pet aisle and re-market them as bird food. I would put a bright orange sticker across the package with a picture of a bird on it where the new mark-down price could be inscribed in Magic Marker.  Maybe they could be called Tweet’s Bird Treats. Having a bird on the label would discourage human consumption, eliminating any lawsuit over someone eating a possibly moldy piece of bread.

Placed next to the birdseed, I am sure that day-old bread would sell out quickly – especially whenever inclement weather is predicted.

And since it is marketed to the birds, I also bet that retailers could charge more than usually half-off and still sell through their supply. In fact, if you have a stock clerk cut those loaves of bread, rolls, cakes and pastries into tiny pieces and put them in a bag as pre-cut bird food you could probably charge even more than the original price.

I am sure that time-pressed Millennial shoppers would be willing to pay a premium for bird bread that is feeder ready and does not have to be hand torn apart. It will allow them more time to spend on their tweeting.