A joke by deadpan comedian Steven Wright goes: “A restaurant had a sign that said ‘Breakfast Anytime.’ So I went in and ordered French toast during the Renaissance.”

Breakfast may not be quite that versatile in real life, but it’s close.

In both the long and short term, breakfast has evolved as much or more than any other meal daypart. And ready-to-eat breakfast offerings in grocery freezer cases have evolved with them. Some of these changes are due to general trends that have affected most forms of food retailing and consumption, and others are unique to breakfast.

In the frozen aisles, breakfast products have outpaced others. Sales of frozen breakfast items grew 24% from 2012 to 2017, according to the Wall Street Journal. Although growth has flattened out in the last two years, frozen breakfast items still outperform frozen food as a whole. According to the 2017 State of the Industry Report from the National Refrigerated and Frozen Food Association, breakfast options are one of the few frozen food categories that have shown consistent long-term growth, with an average 7.9% compound annual growth in sales for breakfast entrees and 5.2% in breakfast sandwiches over the last four years.

Millennials are key to this performance, especially those with young children. According to a survey by Acosta, 82% of millennials agreed that frozen foods were valuable as a convenient breakfast option for their children.

“Millennial and Gen X mothers are very health-conscious and looking for convenient and healthy breakfast options,” says Colin Stewart, SVP at Acosta. “Frozen breakfast offers some great options versus sugary cereal products or having to prepare a protein-based breakfast from scratch.”

As a daypart, breakfast is unique in several ways, one of which is its history. The hearty breakfast of days gone by came about because morning was the best chance for farmers and their field hands to load up on the calories they needed for the day’s hard work; it often was inconvenient, or impossible, for everyone to assemble back at the farmhouse for lunch. (This is why some restaurants still advertise an elaborate morning meal as a “farm breakfast.”)

The situation is paralleled by modern uncertainty as to when, and in what form, today’s office workers will be able to eat lunch. That means they’re looking for a breakfast substantial enough to keep their stomachs from growling during that last-minute noon meeting. As a report by the Hartman Group puts it: “The new American weekday breakfast is moving from light, grain-based breakfast foods tied to old notions of nutrition to higher-satiety foods that consumers believe will give them sustained energy to cope with an unpredictable schedule.” This dynamic is in large part behind the adage that “breakfast is the most important meal of the day.”

But if breakfast is the most important meal, it’s also the hastiest. Making elaborate, protein-rich breakfasts takes time that many consumers don’t have in the morning. This sets the stage for prepared frozen breakfasts.

“If I’m in a rush in the morning, I need to get my kids off to school or daycare and off to work, there’s a convenience aspect—yet I can still feel that I’m providing a healthy, good start for my children for the day,” says Karen Strauss, principal at Cadent Consulting.

The current trend toward favoring protein over carbohydrates is nowhere more evident than in breakfast. “A lot of what’s driving the growth in the frozen breakfast category are items that offer protein, which is something that consumers are looking to start their day off with,” Strauss says.

Bob Evans, now a division of Post Holdings, counts both croissants and biscuits with sausage, egg and cheese among its single-serve top sellers. Newer offerings include a sausage biscuit sandwich and a Canadian bacon, egg and cheese English muffin sandwich.

“Consumers are prioritizing protein consumption, especially for breakfast, when they want to load up on energy for the day,” says Chris Lambrix, SVP of retail sales for Bob Evans.

Conagra Brands also is heavily represented in the breakfast sandwich space, with biscuit sandwiches under the banners of both Banquet and Odom’s Tennessee Pride, the latter of which was acquired in 2012. In addition, Sandwich Bros. of Wisconsin, bought by Conagra late last year, offers a line of flatbread pocket sandwiches with proteins including eggs, cheese, and regular and turkey sausage.

Breakfast sandwiches have something else going for them besides protein: handheld convenience. This is especially significant because when time is a factor, handheld meals require little or no cleanup, and can be consumed on the go.

Wraps and burritos offer the same convenience, which is why they’re making their presence felt in the freezer case. Along with other frozen breakfast products, Good Food Made Simple markets wraps and burritos, several of them with a Latino influence. Wraps include chicken chorizo, huevos rancheros with bacon, spicy veggie, and spinach and mushroom; burritos come in organic spinach and cheddar, veggie jalapeno, Sriracha scramble and the Himalayan.

“There is research that clearly shows millennials are returning the frozen food aisle, and that finding a solution for breakfast is very important to them,” says Russ Williams, VP of brand management and sales for Good Food Made Simple. “Retailers have begun to stock cleaner, more interesting breakfast offerings to cater to this demand. GFMS, with our delicious, clean-ingredient and healthy options, is providing the perfect solution to this highly sought-after group.”

Senior analysts at The Hartman Group agree that health and wellness is a major factor in breakfast choices: “Simple, real ingredients and the absence of negatives (i.e., artificial ingredients/no chemicals) are important attributes during frozen breakfast occasions. Consumers believe that sustainably sourced meat and eggs translate to a better tasting and overall higher quality end product.” 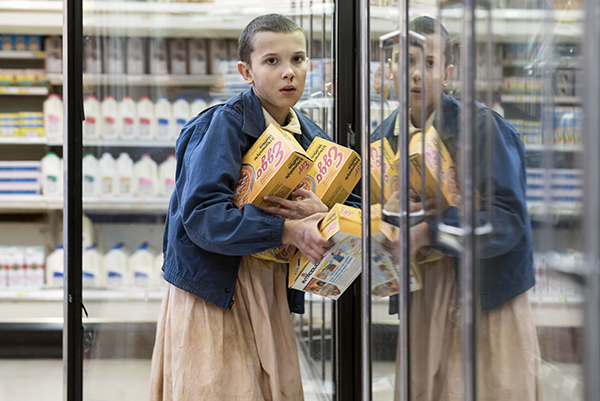 Healthiness and clean-ingredient labels can give frozen sandwiches an advantage over a main source of competition: quick-service restaurants.

The original mass-marketed breakfast sandwich was McDonald’s iconic Egg McMuffin, introduced in 1972. Today, just about every breakfast sandwich in the frozen food case has a counterpart in one or more QSR chains. Suppliers of frozen products believe they have a built-in advantage when it comes to health concerns and transparency, in part because retail products are required to list their ingredients.

“We believe consumers are very concerned about what they eat and feed their families,” Williams says. “The QSR has not completely caught on to that trend and continues to keep ingredients hidden from consumers. In the retail world we are required to—and proud to—list our ingredients on each and every package.”

Strauss of Cadent agrees: “There’s a little bit more control of ingredients, because I can check the ingredient labeling of products I buy in the store and get to a product that’s likely healthier.”

And of course, no matter how close a QSR is, the consumer still has to get there; the kitchen freezer is often more convenient.

“Our large, protein-packed offerings allow consumers to purchase just one, or to mix and match a variety of options, for a delicious and convenient breakfast that can be enjoyed at home or on the go,” says Lambrix of Bob Evans.

Sandwiches may be on the upswing, but they’re far from the only breakfast option in the freezer case. Breakfast bowls, also known as scrambles, are a popular option, especially for consumers who are trying to avoid carbs.

Even with the trend toward protein, pancakes and waffles still are the No. 1 category of frozen breakfast products. This is partly a matter of convenience, especially for toaster waffles, which posted sales of $838.9 million last year. It’s also a matter of tradition: Pancakes and waffles are comfort foods that are associated exclusively with breakfast.

Pancakes and waffles may have lots of legacy brands, but the category is not at a standstill. Kodiak Cakes, which had marketed powdered batter mixes for pancakes and waffles (as well as other baked goods), took the leap into the freezer case last August with waffles in buttermilk vanilla, blueberry and dark chocolate. Products scheduled to come out this April include cinnamon waffles, chocolate chip waffles, buttermilk flapjacks and chocolate chip flapjacks.

“The move felt like a no-brainer for our brand,” says Brandon Porras, director of marketing for Kodiak Cakes. “Our brand looks for categories that are stagnant and have not seen real innovation in a while. With Eggo dominating this category for so long and the only innovation being organic or gluten-free items over the years, we thought we would be the perfect fit.”

Breakfast may or may not be the most important meal of the day. But there’s no question that, when it comes to growing sales in the freezer case, it’s increasingly important to grocers.