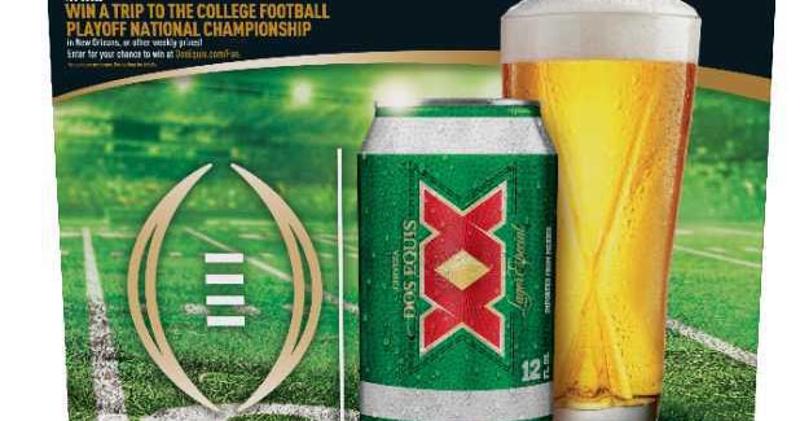 Dos Equis has been named the official beer sponsor of the College Football Playoff and will run a promotion that gives football fans a chance to win prizes.

The promotion, which will run from August through October, encourages consumers to take a photo of themselves with a Dos Equis and upload it to social media using #XXOFFICIALSWEEPS or to the campaign’s microsite for an opportunity to win one of over 400 themed prizes, including tickets to the College Football National Championship game in New Orleans.

The campaign will be accompanied by retail-focused material such as consumer sampling where legal, retail theater and limited-edition packaging, all of which company officials said will help drive store traffic and higher basket rings.

“It’s no secret that college football fans are checking in and cheering on their team every day of the week,” says Karla Flores, Dos Equis brand director. “That’s why we’re reminding consumers that if they consider themselves official college football fans, they should be drinking the official beer of the College Football Playoff all season long.”

According to officials from parent company Heineken, Dos Equis Lager is 55% more likely to be purchased for a tailgating event than other Mexican Imports, and 83% more likely than the rest of the beer category.

Corona is testing a new interlocking beer can design that could eliminate the need for plastic rings, which are generally recognized as being bad for the environment and dangerous to wildlife and aquatic animals, Forbes reported.

The design is a collaboration between Corona parent Grupo Modelo and Chicago-based advertising company Leo Burnett. Each can has a thread on the top and bottom that allows them to be screwed together, with potentially 10 cans able to be combined into a single column.

The new design is called a “fit pack.” It won the Bronze Lion award recently at the Cannes Lions International Festival of Creativity in France.

According to Forbes, Grupo Modelo is also experimenting with several environmentally friendly designs, such as a plastic-free ring made from biodegradable materials.

Stella Artois is giving consumers a more grown-up alternative to the popular red Solo cup with the “Red Stella Cup,” which features a stemmed model similar to its glass version but can be taken to “no glass allowed” areas such as pools and beaches.

The beer brewer is offering a free six-pack of the glasses to the first 1,000 people to visit StellaArtois.com/RedStellaCup. The cups can be purchased for $10 for a six-pack or $30 for a 24-pack. 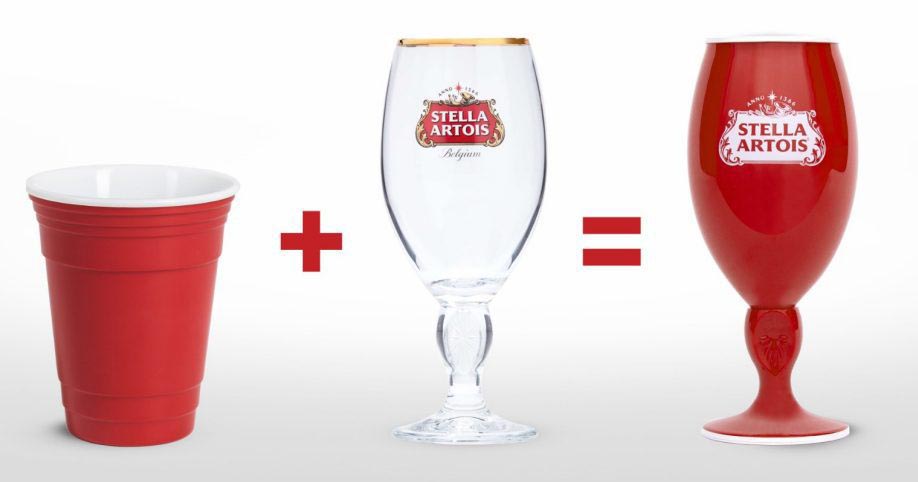 “This summer, we’re all about empowering our consumers to enjoy everyday moments just as much as they would on vacation, and nothing says ‘vacation’ more than time spent enjoying the outdoors with friends and family,” said Peter Van Overstraeten, VP of premium and superpremium brands for Anheuser-Busch. “That’s why we decided to make the Red Stella Cup, the summer upgrade we all deserve. Quality beer in a quality party cup perfect for the outdoors—what’s not to love?”

San Diego-based Duck Foot Brewery, the only brewer in the country to produce 100% gluten-reduced beers, has partnered with Karl Strauss Distributing to reach more retailers in Southern California.

The brand will be available through the distribution arm of Karl Strauss Brewing Co.

Launched in 2015, Duck Foot is recognized for its “ brand approachability and fun irreverence,” according to company officials.

Chad Heath, senior director of sales and logistics and VP of marketing for Karl Strauss Brewing Co., said having a brand that is “this iconic, this cool and that we can scale across Southern California is something that is really important to us.”

“We want to take the distribution model back to what made craft beer distributing interesting and fun, and that is: educating people, showing them there’s a better way and teaching them about unique beers they may not have tried yet,” Heath said.