Sales of refrigerated dressings, dips and spreads are on the rise, with clean, preservative-free and all-natural examples driving growth. Many of the category’s latest product introductions emphasize not only better-for-you ingredients but also versatility in usage.

Refrigerated dressings, dips and spreads also play an important role in two of today’s hottest food consumption trends: healthful snacking and meal preparation made easy. Whether it’s veggies and hummus dip on the go or a ginger dressing turned stir-fry sauce in a flash, refrigerated dressings, dips and spreads are doing double duty in the kitchen and helping to sell complementary items throughout the store, from produce to chips to meat.

According to IRI, Chicago, sales of refrigerated dips reached more than $1 billion this year (for the 52 weeks ending June 17, 2018), up 12.8% vs. the previous year. Sales in the category have been up for the past four consecutive years.

Spreads aren’t far behind, garnering more than $9.5 million in sales for the same time period, up 4.5% vs. a year ago. (For both dips and spreads, figures represent UPC only: refrigerated sold through all refrigerated areas in produce, dairy and deli.)

Supermarkets across the country are promoting healthful refrigerated dressings, dips and spreads paired with produce in a variety of clever ways designed to increase consumption in both categories.

Throughout this month, Rochester, N.Y.-based Wegmans Food Markets is hosting a Halloween Fun Smart Snacking session as part of its Cooking with Kids events. Boasting smart snack preparation with a Halloween twist, Wegmans will show families how to team fresh veggies with roasted red peppers and hummus, as well as other fun and healthful produce-based snack preparations.

Natural Grocers in Lakewood, Colo. is also getting into the healthful dressings game, hosting ongoing Paleo/Primal Salad Dressings and Dips cooking classes at its various locations. The classes focus on easy recipes to show customers how to dress up their veggies with healthy omega-3 and omega-6 fatty acids to support optimal health.

“The idea behind this creation was to offer a healthy and convenient option to consumers,” says Nicholas Blyer of Makoto, which also recently launched a Balsamic Ginger and Wasabi Ginger Dressing to give the consumer more flavor options.

Makoto finds that consumers are gravitating to the many uses of its products, from marinades to stir fry to dips and salad dressing. “We communicate product usage to consumers through labeling and sampling,” says Blyer.

Louisville, Colo.-based Hope Foods, which makes the two top-selling refrigerated salsas and dips SKUs in the natural channel (Hope Foods Original Hummus and Spicy Avocado), also has its eye on the meal-starter trend in refrigerated dressings, dips and spreads.

“We’re seeing a variety of trends leading to our growth in the category, from using dips and spreads as recipe starters to consumer desires for more exciting, flavorful and healthy snack options made from clean ingredients,” says Sarah Leichnetz, marketing director for Hope Foods.

“Consumers are increasingly looking for options that can fit into a hectic life and choices that can help them feel as though they’re cooking, while also making smart, healthy choices for themselves and their families,” she says.

Hope Foods sees its top sellers as evidence of these trends, with consumers embracing the use of Hope Foods Kale Pesto as an alternative to pasta sauce and incorporating Black Garlic Hummus into avocado toast in the morning.

“We believe that the dips and spread category should be an exciting destination that helps inspire creativity in the kitchen,” says Leichnetz.

In its new product development, Hope Foods is looking to create more fresh and healthful interpretations of old-school category favorites. “A portion of our innovation pipeline is focused on making better-for-you versions of classically unhealthy dips and spreads,” says Leichnetz, who points to Hope Foods’ recent introduction of Buffalo Bleu Hummus.

Reinventing traditional spreads and other products with healthier ingredients (think avocados) is also top of mind at Calavo Foods in Santa Paula, Calif. It recently introduced Avocado Mayo, which is sold alongside refrigerated dips, positioned as a healthy alternative to traditional mayonnaise.

“As we visit major retailers across the country, they say they like the freshness, versatility and health benefits of avocados and guacamole,” says Ron Araiza, VP of Calavo Foods.

When it comes to dips, a growing number of consumers are going green. They’re turning to premade, no-preservatives-added guacamole to spice up chips, tacos, vegetables, salads and more.

According to a national benchmark study conducted by Calavo that polled guacamole consumers using a web-based panel in all 50 states, “ease of use” was identified as the top reason why respondents who both purchased and made their own guacamole preferred to use premade guacamole. An overwhelming 78.6% of respondents cited the convenience of premade guacamole as the impetus for purchase.

“Retailers can’t get enough of these types of product,” Araiza says. Guacamole’s growth is 15%-20% per year, he says.

Just in time for back-to-school lunches, after-school snacks and after-sports refuels, Calavo has introduced single-serve 2-ounce guacamole. “We say it’s not just us, it’s all of the competitors whom are equally successful with single-serve,” says Araiza. 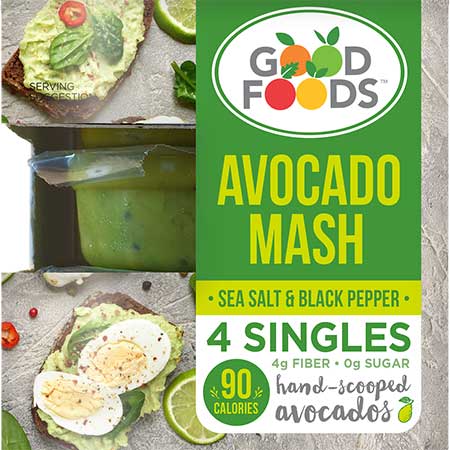 On point with trends including plant-based, vegan and no added sugars, Good Foods Group will soon launch a line of plant-based dips that feature clean and better-for-you ingredients, with no artificial ingredients or preservatives. The line, which includes creations such as Queso Style Dip, Avocado Pesto and Creamy Cilantro, is slated for a January 2019 introduction to encourage healthy eating in the new year.

While consumers demand flavor and versatility from refrigerated dressings and dips, they also want transparency from ingredient labels. “The top trend we are seeing today in the refrigerated dressings/dips category are that consumers are looking for the healthiest options possible,” says Nicholas Blyer of Makoto. “Products with a clean label that are preservative-free, gluten-free, etc., are having a big impact in this category.”

According to a national benchmark study conducted by Calavo, guacamole with 100% natural ingredients and “no preservatives added” are the top two factors when a consumer is determining what brand of guacamole to purchase.