A category that appeared to be headed for a deep freeze is beginning to thaw, thanks to creative manufacturers who are introducing products that appeal to consumers looking for healthy, convenient frozen food products.

According to data from SPINS, sales of natural products in the frozen department have grown 29.5% over the past two years—a particularly impressive trajectory given the category’s overall performance in the conventional multi outlet (MULO) and convenience channels, where the frozen department has grown just 1.5% over the past year. And while products in the natural positioning group make up just 7% of total sales mix in these channels, they represent 57% of the total sales growth, SPINS data shows.

“Conventional retailers may be turning to natural products to garner consumer interest in the freezer section,” according to information presented by SPINS at the American Frozen Foods’ AFFI-CON event in March 2018.

“As younger shoppers mature into regular grocery shoppers, they demand a cleaner nutritional deck and more diversity in product offerings,” says Jack Acree, EVP of Saffron Road Foods, manufacturers of premium Indian and Thai offerings such as Chicken Tikka Masala, Chicken Pad Thai and new frozen Ramen and Udon Bowls made with bone broth. “There is much activity in the category from small players to large CPGs, which has drawn many consumers into the category.” 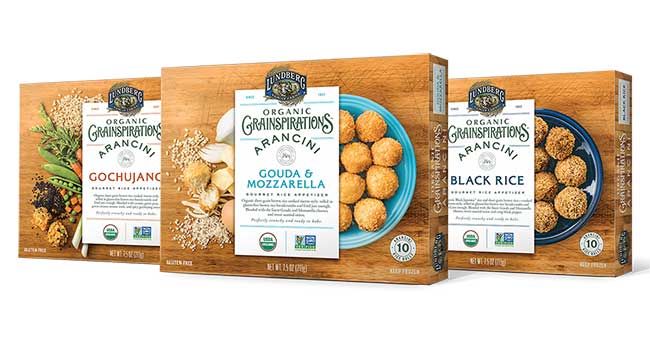 Todd Kluger, VP of marketing and sales for Lundberg Family Farms, a company that recently launched a line of Organic Grainspirations Arancini frozen appetizers, sees it this way:

“When categories are stagnant, or in the case of the frozen category, in decline, it usually means that consumers have turned away from the common brands that are in the category and that innovation has not been able to hold the consumers’ interest and imagination,” Kluger says. “Yes, even in the world of food, there are seasons, trends and fads, just like in the fashion world. Frozen is the new kale, which is a fashionable way to say it. Because there is not a lot of innovation going into the frozen category, the new and novel will catch the consumers’ attention, and great taste and quality will lead to increased sales velocity because of repeated purchases.”

Among those “new and novel” products are plant-based meals—a subcategory currently leading the pack in frozen food sales, according to SPINS.

“Year-over-year growth is high among the top subcategories for frozen natural products, with plant-based meals experiencing standout success,” information from SPINS says. “Besides reflecting a greater industry health movement toward plant-based foods, consumers may also be seeking out plant-based frozen foods because they are more hesitant to eat frozen meat (as opposed to fresh meat). Some of these plant-based meals, such as those from Sweet Earth, also have an upscale positioning with global flavors that likely resonates with millennials.”

Getting Shoppers to the Frozen Aisle

Having a selection of natural frozen food items is key to boosting category sales. But giving these upgraded products their due and getting shoppers to come back to the frozen foods aisle can be challenging—especially considering what Kluger describes as “limited space, given the freezer doors, the fogging phenomenon and the fact that shoppers almost race through the section because it is colder in temperature than the rest of the store.”

“Retailers are already doing a great job of calling out healthy ingredients, products and options through special sections, signage and promotional materials for categories other than frozen,” he continues. “If the retailer isn’t already doing it, special ‘natural and organic’ sections, and vegan and vegetarian sections are the best way to at least hint to the consumer that this is a unique area. Different-colored shelves or tags could also be an option, but [each of those options] has an increased cost to deploy. Just bringing in healthier organic frozen options is a very big step in meeting consumer demand.”

Acree of Saffron Road Foods agrees that keeping natural food items in the mainstream frozen aisle, but grouping all items that customers would typically find in a natural foods store together, is the best option for retailers seeking to boost frozen food sales.

“By being in the mainstream aisle, this natural section is in a perfect position to trade up existing frozen consumers,” Acree says. “Stick with brands that have proven that they have the quality, wherewithal and innovation pipeline to keep the sales and excitement growing in the category.”

… that psyllium, a functional ingredient tracked by SPINS, is known for its high fiber content and digestion benefits? It also has been studied for the ability to reduce inflammation and cholesterol and regulate blood sugar levels in people with diabetes. Psyllium is found in products such as Cappello’s frozen Naked Crust Pizza, and SPINS predicts more functional fibers, seeds and grains will pop up in frozen pizzas in the future.

Trying to decide the kinds of products to carry in your frozen foods department? The following data from SPINS shows the product lines warming up frozen food sales:

The “Shopping the Frozen Aisle” tool kit from the American Frozen Food Institute is designed to help your store’s dietitians and your clients build a healthier diet with frozen foods. The kit offers resources, including a seven-day meal plan made up of primarily frozen products, that can be used in store tours, classes, demonstrations and counseling sessions. For more information, or to download the toolkit, visit affi.org.