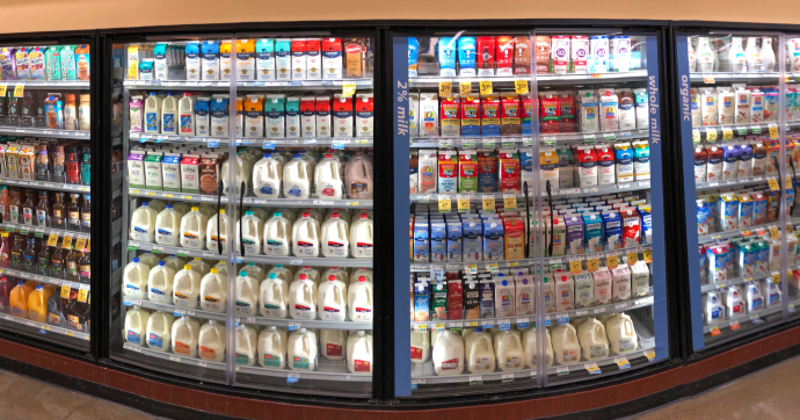 Milk does a brand good: Starbucks, Dunkin’ and Baskin-Robbins all have powered their businesses’ growth on their offerings of sweet, dairy-rich treats. This spring, all three chains have another thing in common: They’ve made plant-based, nondairy alternatives the stars of new product introductions.

Starbucks tested Oatly brand oat milk as a milk substitution option in the Midwest and California in 2020 before rolling out the product nationally in March and debuting two new beverages that use Oatly as the default non-milk component. By the first week in April, many stores had sold out of oat milk.

Dunkin’ in late April added coconut milk to its lineup of dairy alternatives at all its stores and introduced a line of Dunkin’ Coconut Refreshers and a Coconutmilk Iced Latte. And Baskin-Robbins made the new Non-Dairy Strawberry Streusel, which uses an oat-milk base, its May flavor of the month—becoming, according to the chain, the first large national ice cream shop to feature an oat milk-based flavor.

Restaurant chains’ rollout of their newest nondairy darlings comes as plant-based dairy alternatives continue to record significant growth at retail. Dollar sales of plant-based milk alternatives climbed 20% in 2020 (up from 5% in 2019), according to data from market researcher SPINS, and plant-based milk now accounts for 15% of sales in the milk category overall.

"Probably the most dominant shift in consumer behavior is this whole shift to plant-based.” –Kevin Johnson, CEO, Starbucks

Perhaps even more notable, SPINS found in research commissioned by the Plant Based Foods Association (PBFA) and the Good Food Institute (GFI) that 39% of U.S. households now are buyers of plant-based milk.

Where Plant-Based Is Gaining Ground

"Probably the most dominant shift in consumer behavior is this whole shift to plant-based,” Starbucks President and CEO Kevin Johnson told analysts and investors in January.

Whether consumers identify as having a dairy sensitivity or intolerance, are following a diet that avoids or limits traditional milk (as many keto adherents do) or are moving away from animal products for other reasons, they increasingly are seeking out—and embracing—plant-based versions of grocery go-tos, from coffee creamer to ice cream.

Exhibit A may be oat milk itself, sales of which soared 350% for refrigerated products and 106% for shelf-stable products in the one-year period ending September 2020, with overall dollar sales totaling $213 million, according to SPINS data from the fall. That powerhouse performance through the first nine months of 2020 put oat milk, a newer entry in the nondairy category, ahead of soy milk as the No. 2 plant-based milk in the U.S. (Almond milk reigns, at about $1.5 billion in retail sales for the 12 months ended in September.)

Moreover, nondairy milks may serve as customers’ entry point into plant-based alternatives: Plant-based milks are the largest category within plant-based foods, with sales totaling $2.5 billion in 2020 and accounting for 35% of the total plant-based food market, PBFA and GFI noted.

“The success of plant-based milk has laid the groundwork for major increases in sales of other plant-based dairy products,” the organizations stated in a news release, with dollar sales of plant-based yogurt rising nearly 20% and plant-based cheese climbing 42% in 2020. The COVID-19 pandemic, they added, “gave retail sales of plant-based foods an extra boost at a time when interest in the sector was already surging, driven by a focus among consumers on personal health, sustainability, food safety and animal welfare.”

At restaurants and at retail, many consumers are lapping up nondairy options. But there is also, as the late radio legend Paul Harvey used to say, the rest of the story: Traditional dairy, too, is seeing sales gains.

“Dairy was one of the early pandemic powerhouses of 2020,” Eric Richard, industry relations coordinator for the International Dairy Deli Bakery Association, said in a report on category sales for March 2021. And while year-over-year sales in March couldn’t match the spikes seen in 2020 as schools and offices shut their doors and restaurants closed their dining areas, overall dairy sales still were up nearly 11% over a pre-pandemic baseline of March 2019, according to IRI figures.

“Traditional dairy is certainly not in any kind of sales slump,” says Anne-Marie Roerink, principal and founder of 210 Analytics. “While plant-based milk alternatives have been making inroads, traditional dairy represents the majority of sales by an enormous margin.” For the 12-month period ending in March, traditional milk topped $15.6 billion in sales, Roerink notes, and natural cheese reached $12.2 billion.

Where traditional dairy is thriving is where producers have responded to consumers’ changing dietary preferences and sought-after nutrition profiles with products marketed as the most natural, most nutrient-rich and most flavorful.

“Fat is back,” Roerink proclaims. With many U.S. consumers’ critical eye currently focused more on carbohydrates—and especially sugars—than fat, whole milk and full-fat yogurts and cheeses have seen a resurgence. The full-fat trend “has a big impact on dairy, and cheese in particular,” she says.

Full-fat dairy products, often with fewer ingredients than their lower-fat and more-processed alternatives—both of the traditional and plant-based variety—also benefit from being marketed as “real” choices, Roerink notes. Think real butter for at-home baking, for example, or real, full-fat cheese for the pizzas topping American consumers’ pandemic-purchased pizza ovens.

Natural cheese, cream/creamers, sour cream and cream cheese all posted double-digit percentage growth in dollar sales in March over the same month in 2019 and tracked ahead of sales growth for traditional milk, according to data from IRI.

“The clean-label trend has been around for years and seems to have staying power,” she says. “This is not an area where plant-based alternatives shine, but it’s an area where dairy can make great headway.”

Following from that is the kids consideration: For many parents, traditional milk still is seen as a more-healthful choice for their children, especially young children, than plant-based alternatives.

“Parents still feel that there could potentially be a gap in nutrition between plant-based and dairy,” says Emmett of the PBFA. And while plant-based producers increasingly are adding calcium or omega-3 fatty acids to products to assuage these concerns, traditional dairy producers have seized on the leg up they enjoy in meeting parents’ desire for nutrient-dense choices for their kids.

“Parents still feel that there could potentially be a gap in nutrition between plant-based and dairy.” –Julie Emmett, PBFA

Also this spring, international co-op and Horizon competitor Organic Valley added to its Grassmilk line of grass-fed milks, which had debuted with only whole milk. A new offering of fat-free Grassmilk is geared toward organic-conscious consumers who might buy full-fat milk for some members of their household—children or carb-counting adults, for example—but who seek lower-fat choices, too. Grass-fed milk, according to SPINS, is seeing a three-year compound annual growth rate of 27%.

Dairy producers also are expanding choices geared toward consumers of all ages with sensitive stomachs: Stonyfield Organic earlier this year debuted single-serve, lactose-free bottled milk in plain and chocolate reduced-fat varieties. Organic Valley, too, introduced lactose-free, 1% chocolate milk in March, touting that the offering “contains essential nutrients like vitamins A and D and 8 grams of high-quality protein” and citing SPINS data that sales of lactose-free dairy products rose 15% in 2020.

For as wide-ranging as U.S. consumers’ dietary preferences are, most consumers aren’t monolithic in their food and beverage purchases—if in part because health concerns and taste preferences diverge within their own household, necessitating buying, for example, multiple varieties of milk. As with traditional meat vs. meat alternatives, U.S. consumers increasingly show willingness to try plant-based versions of some of their favorite items, but most aren’t abandoning traditional varieties. Almond milk can go into the same basket as full-fat butter. Coconut-milk ice cream can join cream cheese in the same cart.