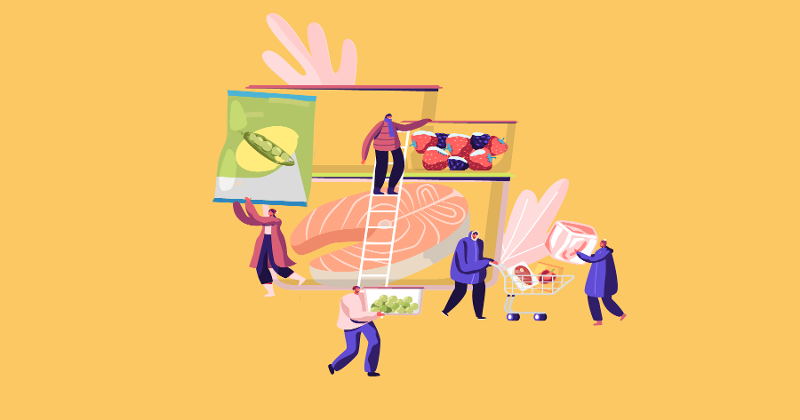 “They’re a quick and convenient way to feed your family or have some snacks,” he says. “Frozen is a great alternative to the scratch home-prepared meal. It gives you a break and lets you put a great meal on the table.”

Before the COVID-19 pandemic began, frozen foods were already doing well thanks to innovation from manufacturers, quality products, catering to trends such as keto and plant-based foods, and the convenience and health they offered. But once the pandemic arrived, Americans started stocking up, and comfort foods became more popular, often trumping health.

Frozen foods’ popularity swelled early in the COVID-19 pandemic and it’s not going away for Abingdon, Va.-based K-VA-T, says Glei. “People are eating more meals with their family at home, and whether it’s breakfast, lunch, dinner or snacks, frozen fits because it answers all those needs.” 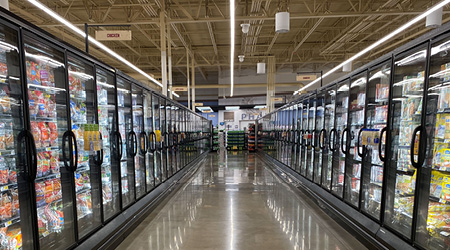 At Giant Food stores, the categories driving frozen growth this year are pizza, fruits and potatoes. Health and convenience are the reason behind most purchases, says Monica Simmons-Dolce, director of edible grocery, dairy and frozen for the Landover, Md.-based company.

And at SpartanNash stores, frozen plant-based meat is up 560%, says Joe McQuesten, SVP of fresh and center store merchandising for the Grand Rapids, Mich.-based company. Top frozen plant-based sales are coming from single microwavable meals, burritos, breakfast microwavable and premium nondairy ice cream and desserts. “Over the past five years, frozen food has transformed and now offers much healthier products,” he says.

Amy’s, Petaluma, Calif., which launched in 1987, has seen double-digit growth of frozen offerings during the pandemic and there’s no indication sales will slow down, says Chief Marketing Officer Monica Halpert. Consumers are looking for comfort (through pizzas, mac and cheese), as well as organic, easy-to-make and new-to-the-market offerings and plant-based items.

The frozen category, he says, “has outperformed all other categories,” during the COVID-19 pandemic, but it was already doing well, with back-to-back years of growth.

Established brands are doing well, especially with boomers and Gen X shoppers, says Julie Henderson, VP of communications for the National Frozen and Refrigerated Foods Association (NFRA) in Harrisburg, Pa., while millennials and Gen Z “are looking for authenticity and value wherever they can find it.”

At K-VA-T and Food City stores, shoppers tend to stay with the brands they know, says Glei, but due to food shortages during the pandemic, customers started trying other brands. “We’ve seen very little hesitation to move on to other brands if the favorite is not on the shelf,” he says.

Brand familiarity is key with Giant shoppers, who are also gravitating to store brands. “Big brands are still getting more attention from total sales and shoppers’ loyalty perspectives,” Simmons-Dolce says. The company also has two private label lines that are doing well, “but we see opportunities in some categories such as ice cream and meals,” she adds.

“Brands all the way around are winning in frozen,” says Anne-Marie Roerink, principal with 210 Analytics, San Antonio, thanks to a lot of experimentation in this aisle due to out-of-stocks.

But frozen foods were already thriving. “The frozen food aisle has done a tremendous job in catering to its core consumer, millennials. From packaging reinvention to bringing in new, exciting, international and healthy cuisines,” Roerink says. “Frozen food manufacturers are listening to their core audience and adapting product, marketing and merchandising strategies accordingly.”

Glei says innovation, in general, has slowed since March, because most food companies have focused on producing their best-selling SKUs, to the detriment of less popular products and new product development. Where he does see innovation is in frozen plant-based products and, to a lesser extent, keto foods.

At Giant, the most exciting innovation is in frozen meals, both single-serve and multiserve, says Simmons-Dolce, as well as frozen meatless dishes and ice cream and ice cream novelties.

O’My is a dairy-free gelato company in Richmond, Va., that listens to its retail buyers and consumers to decide how to “differentiate O’My from the other frozen desserts,” says co-founder and Chief Operating Officer Julie Bishop. “Innovation is necessary for a brand to stay relevant and competitive,” she says. Recent product launches target the low-carb and keto lifestyles.

Cool Beans launched in 2020 with three SKUs of plant-based, gluten-free frozen wraps and the company plans to extend that line and move into different formats such as bowls, breakfast items and desserts. However, it won’t happen suddenly. “We’ve too often seen the pains caused by SKU proliferation that are too aggressive and not well-planned,” says Mark Doskow, managing director of BeyondBrands, a part owner of the company.

At Nestle, too, innovation is spurring sales. “Comfort food may be bringing people to the frozen aisle, but it is these new offerings that will keep them coming back,” says Carmichael. “Consumers are realizing this isn’t their grandmother’s frozen food aisle anymore.”

Innovation is important as consumers are eating out less and craving dishes they can’t easily replicate at home, such as seafood and globally inspired dishes, says Henderson of NFRA. “This could create an opportunity for retail to fill this hole and create a safe space for experimentation,” she says.

Because the frozen aisle is not a great area for browsing, it’s key to connect with shoppers outside it, says Roerink.

K-VA-T’s promotional programs are mostly high-intensity, short-duration events, which used to be for one day but now run for two or three days to keep store crowds down, and frozen always does well with those, Glei says. The company also sends out personalized promotions that resonate with customers. And digital continues to grow at an exponential rate, he says, with “shoppers going online to see what’s on sale or to find a digital coupon, and frozen participates nicely in that.”

Promotional activity has been challenging for Cool Beans, “with the loss of demos, trade show and event opportunities,” says Doskow. Instead, the brand has invested more in in-store promotions like buy one, get ones and two-fors and ramped up social media and influencer campaigns. Digital marketing is also very important to the brand, especially “to audiences shopping at home through Instacart or other platforms, he says, “due to the recent surge in online grocery shopping.”

There have been changes for O’My, too, which has shifted to a heavier digital approach, using platforms such as Ibotta (a cash-back app), Instacart and social media. And Amy’s prefers to use social media to reach its customers. “Authentic, two-way dialogue is so important to us as a brand,” Halpert says.

The Hottest Trends in Retail Foodservice