Forget shaken or stirred. Today’s adult beverage consumer has a multitude of mixologist-inspired flavors, premium quality products and convenient packaging from which to choose.

Suppliers are shaking things up in wine, beer and spirits like never before, offering consumers the unique drinking experiences they increasingly seek, with everything from mixers made with less sugar and natural ingredients and thoughtfully crafted complete cocktails in a can.

“In terms of trends in adult beverages, I see incredible flavor innovation, and all of the rules being broken,” said Tracy Frisbie, vice president of marketing for Dallas-based Southern Champion, Buzzballz’s parent company. Frisbie, a more than 20-year veteran of the adult beverage space, sees suppliers and mixologists “creating beverages that cross all the lines.”

Southern Champion launched Buzzballz, a line of ready-to-drink cocktails that contain 15% to 20% alcohol by volume (depending on the state) in 2009. The fun and colorfully packaged single-serve cocktails are made with 100% juice, premium ingredients and no high fructose corn syrup.

WinCo Foods based in Boise, Idaho, has had “amazing” success with BuzzBallz, said Frisbie. The grocer fills large bins with colorful cans of Buzzballz. “It’s like a treasure hunt,” she said. “Shoppers dig through to find their favorite flavor, and they can mix and match rather than buying a four-pack of a flavor they haven’t tried before.” 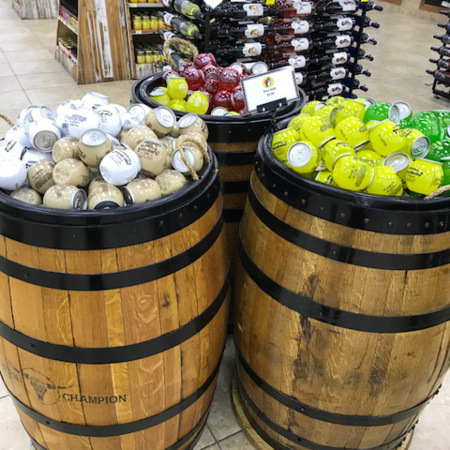 BuzzBallz will launch new flavors this spring, including Ruby Red Grapefruit and Horchata. The company also has introduced BuzzTallz, 375-mL cans of wine-based cocktails that are made with either agave wine or orange wine. The line features six flavors and is sold in singles and four-packs.

“We have a much more adventuresome consumer base,” said Frisbie of the BuzzBallz and BuzzTallz brands. “People are also reading labels and want to know what’s in their beverages. They appreciate that we have less sugar, and that we’re gluten-free and kosher.”

But what resonates most with consumers, said Frisbie, is that BuzzBallz is a woman-owned company.

“Craft is a trend that is going to continue to grow in soda and alcohol, but also in cocktail mixers, as millennials seek out authentic brands, quality ingredients and thoughtful production,” said Derika Legg, general manager North America for the Australia-based Bundaberg Brewed Drinks, makers of ginger beer. “They want to know the story behind a beverage product before they drink it, and they want an elevated experience.”

As producers of craft ginger beer, Bundaberg has its eye on social media’s darling drink: the Moscow mule. Legg cites Nielsen data, which shows the Moscow mule ranks No. 4 in the best-selling evening cocktails in the United States. The top three are margaritas, martinis and old fashioned cocktails.

While mixologists continue to create new versions of this vintage cocktail served in a copper mug, the signature ingredient in all is ginger beer.

“Bundaberg Ginger Beer is now the No. 1 selling craft ginger beer on the market and continues to show strong growth of over 30% year over year,” said Legg, citing IRI SPINS data for conventional markets for the 52 weeks ending Jan. 27, 2019.

Tapping into the mixology trend of combining ginger beer with different spirits to create interesting versions of mules, Bundaberg Brewed Drinks is partnering with London-based Diageo this month on a joint promotion in stores across California and Washington to feature Captain Morgan Spiced Rum and Bundaberg Ginger Beer. “Consumers are being rewarded for buying both products with $3 off to put a twist on their mule,” Legg said.

Bundaberg also offers retailers a turnkey merchandiser unit with a small footprint but large stock weight holding. “A key bonus for retailers is that we sell well both as a soda and a mixer,” said Legg. “So it opens opportunities for incremental and impulse purchase opportunities in liquor, produce (with limes and vodka), and near the registers.”

One of the hottest trends at this year’s Winter Fancy Food Show in San Francisco, premium cocktail mixers with natural ingredients, less sugar and handcrafted appeal are changing the way consumers enjoy spirits.

Five years ago, Pereira, a former lifestyle/entertaining writer who worked for Martha Stewart, saw an opportunity for a premium cocktail mixer that was low in calories, sugar, sodium and carbs. “I noticed a big hole in the market around the art of making signature cocktails at home in a simple way,” she said. “I saw low-end products and the apothecary high-end bitters, and nothing in the middle.” 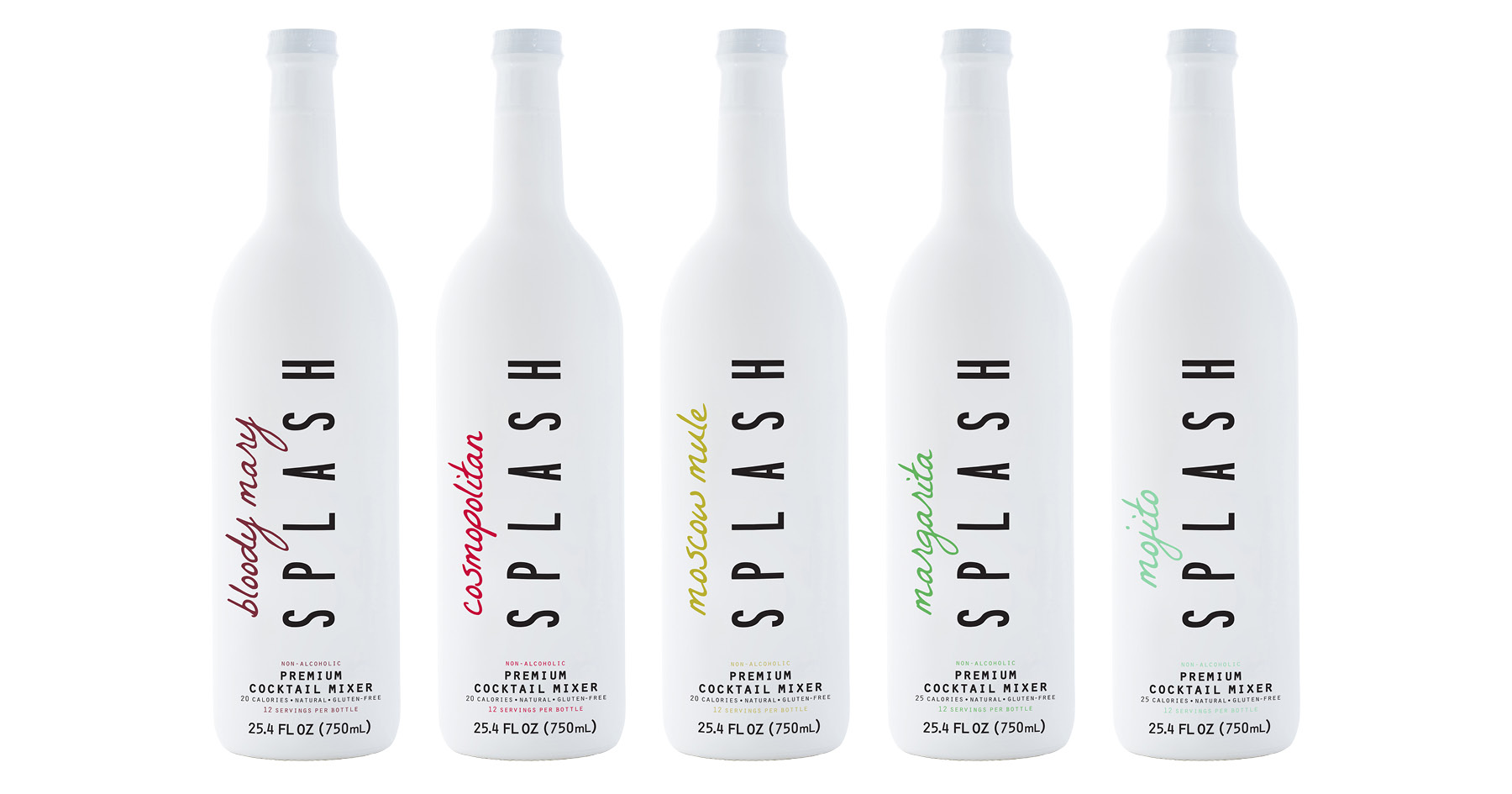 “Splash allows consumers to create the perfect cocktail in under 10 seconds,” said Pereira, pointing out that with Splash, consumers can become their own mixologist with ease and create twists on the Moscow mule, for example, by adding different spirits to make Kentucky (bourbon), Mexican (tequila) and Irish (whiskey) mules.

Virginia Beach, Va.-based Taste, a specialty foods market chain and upscale cafe offering boutique wines, craft beers and more, created a special Splash hashtag for the holidays that put the premium cocktail mixer in the spotlight as a host gift for parties and a stocking stuffer.

Splash recently began a test with Target in all of its New York stores. “It’s definitely exciting to have New York imprinted with Splash,” said Periera. 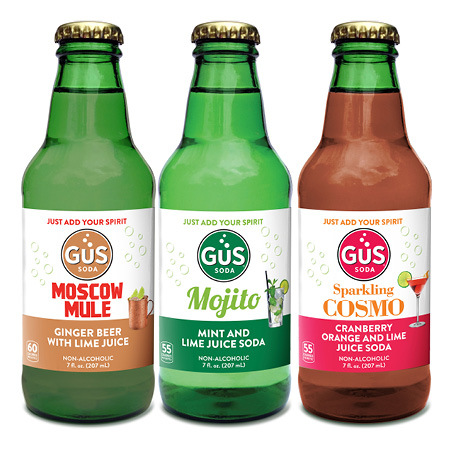 Gus Soda of New York is another recent entrant in the premium cocktail mixer category. The company, which also makes natural grown-up sodas called Gus in small batches using simple ingredients and about 40% less sugar, is focusing on specialty food stores and independent grocery with its line of four Sparkling Cocktail Mixers.

Available in Mojito, Moscow Mule, Sparkling Cosmo and Tonic & Lime, Gus Sparkling Cocktail Mixers are made with cane sugar, are decidedly less sweet than traditional mixers and have about 50 calories per 7 ounces. “That’s one-third less sugar than most mixers,” said Steve Hersh, Gus founder and president. “People love that aspect.” And because Gus tonic isn’t that sweet, the lime shines through in the Tonic & Lime.

In terms of placement in-store, Gus products “straddle the mixer and soda set,” he said. As a result, its soda four-packs and sparkling mixers play well in more than one space in the store.

Whole Foods in the Northeast has done well with endcap displays, said Hersh. And Woodland, Calif.-based Nugget Markets has had great success with holiday sales when shoppers are looking for easy cocktail entertaining.

“We put it on sale at Nugget Markets around the holidays and really see the sales spike,” Hersh said.

Brooklyn Crafted of Brooklyn, N.Y., was another exhibitor at this year’s Fancy Food Show telling the story of handcrafted cocktail mixers. It makes its Ginger Beer with 100% fresh, unfiltered ginger pieces that are visible in the bottle.

Available in a variety of flavors, including Lemon Lime, Mango, Extra Spicy and Earl Grey, Brooklyn Crafted is focused on simple recipes that yield flavorful cocktails.

“In regard to beer, the grocery channel is growing faster than any other off-premise channel,” said Alicia Cleary, director of industry relations for Anheuser-Busch in St. Louis. “This can be attributed to the strong gains in the premium-plus and flavored malt beverage (FMB) segments of the category.”

According to data from Chicago-based IRI, together the two segments represent 84% of the category growth in grocery.

“These are absolutely two segments to watch in grocery,” said Cleary, who finds that beer continues to play a critical role in grocery. “Beer delivers the largest number of trips and percentage of households purchasing among the top alcoholic beverage categories.”

The new Stella Artois (an Anheuser-Busch brand) TV campaign, which debuted during the 2019 Super Bowl, features Sarah Jessica Parker of “Sex and the City” fame and Jeff Bridges as his iconic “The Dude” character from “The Big Lebowski.” Part of the inside joke is that Parker’s character always drank cosmopolitans.

But beer consumption among women is no laughing matter at Anheuser-Busch. “Beer consumption is growing with women, without question,” Cleary said. “However, women represent only 26% of total beer consumption. There is a clear opportunity to continue the trend of making beer a chosen product for females.”

Transparency is one attribute that a growing number of consumers across the board are looking for from their beer.

Flavored malt beverages and premium plus make up 84% of beer category growth in grocery.

“According to a recent Nielsen report, 39% of U.S. consumers say they would switch from the brands they currently buy to others that provide clearer, more accurate product information,” Cleary said. “This is why Bud Light recently became the first beer in the U.S. to put an ingredients label on its packaging.”

Consumers are also looking for companies that care not only about the quality of the product they make, but also about how it was made with respect to the planet. “We made Budweiser the first major beer brand in America brewed with 100% renewable electricity,” said Cleary.