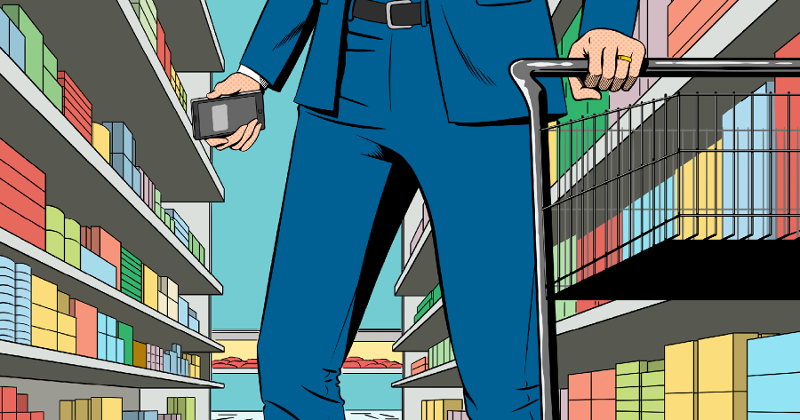 He is driven by convenience and will pay a premium for it. While he shops across multiple channels, he is more likely to go to the grocery store for food. Technology is his friend, and he appreciates online ordering and mobile pay. He also shops for groceries as many times per month as his female counterparts, so why is the grocery industry still referring to the shopper as “she”?

Market research data from leading industry experts, including IRI, Mintel, The Hartman Group and Technomic, indicate that while their purchase patterns may be somewhat different, men’s total grocery spend is about the same as women’s.

“More men are shopping frequently, and they are now making just as many monthly store visits as women,” says Laurie Demeritt, CEO of Bellevue, Wash.-based The Hartman Group, whose Food Shopping in America 2017 report revealed that men shop multiple times a week across multiple channels.

Men are grocery shopping somewhat more often than women too. According to The Hartman Group’s findings, 56% of men are making two or more shopping trips a week, while 52% of women do the same. Further, men also visit slightly more stores and more channels per month than women.

When it comes to matters of the cart, recent research reveals that men and women do shop differently, and often with different priorities. A dive into these differences—and a commitment to understand them—can inform certain merchandising, marketing and promotional decisions for retail trading partners trying to reach the increasingly influential male grocery shopper.

The Need for Speed

While this article seeks to debunk traditional stereotypes of male shoppers, some habits remain hardwired by gender.

In general, men take a more direct approach to grocery shopping, whereas women are more inclined to explore and experience.

“I pretty much stick to what I need,” says Bernie Belandres, a married father of four in San Francisco. The 40-something investment manager, who shops at least twice a week at Safeway and monthly at Costco, says he shops differently than his wife. “I get the obvious things, the basics—4 gallons of milk, juice, avocados, cucumbers—things that we eat all the time. My wife gets the things that I think are more obscure, like vanilla extract.”

What information do you look at on the package when deciding to purchase a new food or beverage item?

What is your attitude toward eating?

“In some respects, men just go to the store and buy what they need,” says Joan Driggs, VP of thought leadership and content for IRI, a Chicago-based provider of big data, predictive analytics and forward-looking insights. “They also shop at more stores and pick things up where they are.”

“And I’m seeing that they’re buying all categories at those stores,” says Driggs. “In general, men seek to have more needs fulfilled at whatever store they’re in. Men are less inclined to be swayed by marketing, but they make the most out of each trip. Women are far more influenced by marketing and are more involved with loyalty discounts and coupons.” She points to IRI data that finds when considering new products, women are more apt to consult an array of resources, including in-store flyers, signs and displays; product labels/packaging; newspaper circulars from home; and information from a retailer’s website or email.

The difference between male and female shopper habits around new product trial is even more pronounced with regard to shopper loyalty discounts and coupons.

Women are far more likely (25.8%) to look at shopper loyalty discounts than men (16.5%) when considering a new product purchase. Women are also more likely to be influenced by coupons from home (24.7%) vs. only 16.3% of men.

“Men tend to splurge more on convenience—all of the data seems to point to that—while women do a better job of sticking to a budget,” says David Lockwood, director and founder of Mintel Consulting in Chicago.

Lockwood recently explored shopper behavior data during his “Five Key Drivers in Specialty Food for 2020” presentation at this year’s Winter Fancy Food Show in San Francisco. The data revealed that while women spend about 10% more on general groceries, men spend approximately 10% more at supermarket restaurants, cafes and delis. “Where there is discretionary income, men will spend more on value-added specialties,” says Lockwood. “But men and women’s total spend is not much different.”

Which type of store are you most likely to visit for food?

It’s the No. 1 reason that Bryan Tippet, a single 30-something in banking and finance, shops at his Pittsburgh-area Giant Eagle five days a week. “I live right next to a Giant Eagle that offers multiple services—grocery, fresh prepared foods, gas, a post office and adult beverages. [The other area grocery stores] can’t compete with the one-stop-shop convenience of my Giant Eagle.”

Another trend influencing today’s male grocery shopper is the rise in diets with a higher propensity for male adoption, such as paleo and keto, as well as an increase in dieting frequency among all consumers.

“Dieting has become much more interactive and high velocity,” says Lockwood. “People aren’t sticking with one diet, but rather changing it up all the time.” In some cases, they’re on more than one diet at the same time. “Men didn’t used to talk about dieting, and now they do,” continues Lockwood, who sees “the gamification of dieting” as the driving force behind the male dieting trend.

Dieters can track progress on their phones, and wearable technology devices allows them to compete with others who are on the same diet. “It’s really something that’s happened in the last five years, and suddenly men are gaining more interest in diets.”

When it comes to making new food and beverage purchase decisions, which of the following are most important to you?

WGB’s sister Technomic division asked approximately 2,500 consumers 18 and older to rate the importance of various attributes when purchasing prepared foods at retail. Both men and women agree that convenience—from location to parking and easy-to-navigate aisles—is key. The availability of larger sizes and quantities of prepared food/beverage is slightly more important to men (64%) than women (63%), as is the quality of beverages, with 69% of men naming quality beverages as highly important vs. 67% of women.

Lockwood also sees specialty beverages gaining traction among men and women, with men favoring ready-to-drink tea, and zero-calorie beverages appealing vastly more to women than men. “Beverages are definitely one of the fastest-growing areas in specialty and will continue to be,” says Lockwood.

And while certain specialty beverages, such as energy drinks, were originally marketed more to men, Mintel sees a gender-neutralizing trend in the specialty beverage category with both men and women gravitating to wellness and functional drinks.

Amount of men making two or more shopping trips a week vs. 52% of women. Source: IRI

Men are engaging slightly more with technology around shopping than women. When looking at prepared foods purchases, for example, Technomic reports that men prefer stores with free Wi-Fi, mobile/smartphone payment and online/mobile ordering. Whereas atmosphere and ambiance, a fun shopping experience and kid-friendliness have greater importance among women.

Scott Logan, a 50-something tech-savvy chief operating officer for an energy investment bank, is a married empty nester who lives in Denver and shops one to three times per week. Whole Foods Market is his go-to store, but he shops Safeway and King Soopers for cleaning products and pharmaceuticals. “If I need more than four or five items, I use the Shopping Pro app,” says Logan. “I make a list just before I go to the store. I’ll look at recipes and put a list together. I also check the pantry and fridge so I don’t buy things I don’t need.”

Like other male specialty shoppers, Logan buys from a broader array of retailers for food, beverages, personal care and home goods.

This is also true for online purchases of specialty food and beverage. Mintel asked men and women where they shop online for specialty products and found that while they both shop Amazon and Walmart equally, men had a higher incidence of shopping a broader array of online retailers, including Target, Instacart, Thrive, Peapod and iGourmet.

Male Marketing in the Modern Age

While Target is smart to step up its grooming game with entire departments devoted to men’s personal care, the retailer has been equally astute in knowing when to leave gender stereotypes behind. In 2015, Target eliminated gender-based labeling on children’s toys, bedding and entertainment.

“The short answer is that gender usually doesn’t matter when it comes to deciding which types of promotions to run,” says David Moran, co-founder of Palo Alto, Calif.-based Eversight Inc., an artificial intelligence-powered pricing and promotions solutions provider for retailers and brands. “Women tend to be more responsive to promotions generally, but we don’t see material differences in the types of offers that are preferred. In other words, if women prefer a BOGO offer structure to a percent off deal of a similar depth, most of the time men usually prefer that too.”

There are a few exceptions, notes Moran: Women skew much higher on engagement with gelato promotions, and men with multiples on cases of beer. “That structure typically results in very strong drop-off of female interest relative to male … but more often than not, discriminating promotional types by gender is a losing game,” he says.

Whether consumers identify as a particular gender or nonbinary, shopping for and preparing food satisfies an emotional need in us all.

“Marketing communications and shopping solutions must resonate emotionally as well as address more mundane issues, like savings or convenience,” says Demeritt of The Hartman Group. “Long-term shifts in how household duties are divided mean that marketers should move beyond gender-based marketing/communications and layout factors. Instead, focus on understanding your mix of customers and their assessment of the top satisfaction drivers for your particular channel.”