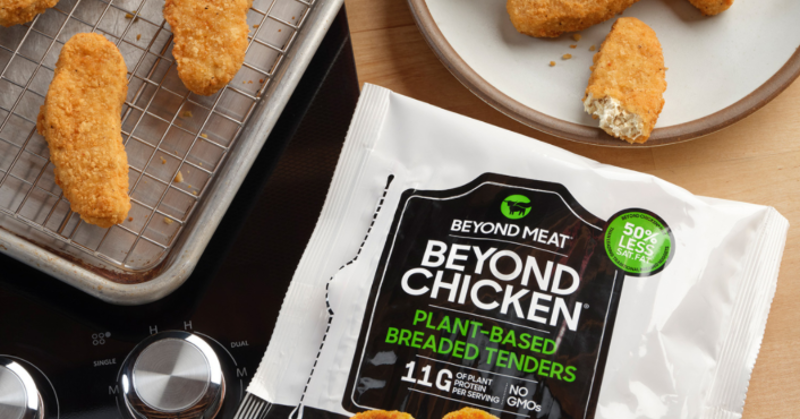 Meatless chicken is the latest battleground for plant-based meat alternatives at restaurants and at retail, and El Segundo, Calif.-based Beyond Meat on Monday announced that its entry into the faux-chicken mix is ready to hit store shelves.

Beyond Chicken Tenders will make their retail debut in October at select Walmart, Jewel-Osco, Safeway NorCal, Harris Teeter, Giant Foods and ShopRite stores, Beyond Meat said in a news release, with additional distribution expected later this fall. The grocery launch follows Beyond's trial of its plant-based chicken products at select Panda Express and A&W Canada locations this summer. At Panda Express, the Beyond the Original Orange Chicken, a plant-based version of Panda's best-selling entrée, sold out within two weeks of its launch, Beyond Meat noted in its release.

Beyond's meatless tenders, made from non-GMO faba beans, contain 11 grams of protein per serving and have half the saturated fat of traditional chicken tenders. The frozen, heat-and-eat tenders can be prepared in the microwave, an air fryer or the over and carry an MSRP of $4.99.

"We’re thrilled to be answering consumer demand by launching Beyond Chicken Tenders at prominent retailers nationwide, continuing our momentum in the plant-based poultry category," Beyond Meat Chief Growth Officer Deanna Jurgens stated. In addition to its plant-based poultry debut at retail, Beyond Meat announced expanded availability of several of its other products at Walmart this fall. An additional 1,500 Walmart locations will begin carrying Beyond Breakfast Sausage® Classic Patties, and 1,300 more stores will add Beyond Breakfast Sausage Spicy Patties, the company said. Beyond Meatballs™ and Beyond Beef® Crumbles will see expanded distribution at Walmart, too.

Three weeks ago, rival Impossible Foods, of Redwood City, Calif., announced that its Impossible Chicken Nuggets would arrive this month at select Walmart, Albertsons, Kroger, Gelsons, Safeway, ShopRite and Giant locations. Impossible in August announced a pair of executive leadership appointments as it readied its expansion into plant-based poultry at retail.

In 2020, Chicago-based market researcher SPINS reported earlier this year, 18% of U.S. households reported buying plant-based meat alternatives—an increase from 14% who said so in 2019. Meatless nuggets and tenders currently are a tiny fraction of the overall meat alternatives market, which is dominated by meatless dinner sausage substitutes and burger patties, fellow Chicago-based research firm IRI noted earlier this month. And in an increasingly crowded marketplace, refrigerated plant-based meat alternatives recorded their third straight month of year-over-year sales declines in August, although dollar sales were up more than 70% on a two-year stack. In August 2021, 34.8% of meat-alternative pounds were sold on promotion, vs. 30.4% sold on promotion in August 2020.