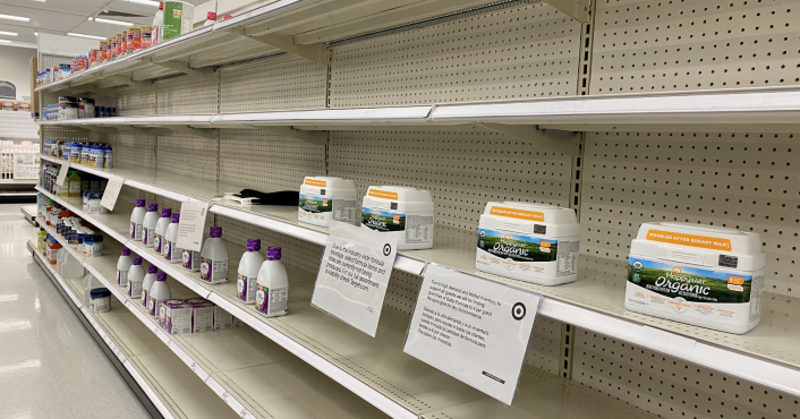 After out-of-stock rates for baby formula spiked to 43% nationwide for the week ending May 8, according to Datasembly, President Joe Biden spoke with leaders from Walmart and Target as well manufacturers Reckitt and Gerber on Thursday about what they're doing to help keep formula shelves stocked.

Walmart and Target executives, according to a statement from the White House, "discussed state-specific disparities, and the President asked what more his team can do to help move product and get more product to communities in need." Reckitt and Gerber leaders told Biden that their companies had increased the amount of their infant formula available to consumers by approximately 50% in March and April. Still, several retailers have instituted formula purchase limits recently in an effort to promote more-equitable access to the products.

Steps that the Biden Administration will take to further address the formula shortage, White House Press Secretary Jen Psaki said in a briefing with reporters, include "cutting red tape to get more infant formula to store shelves quicker by urging states to provide consumers flexibility on the types of formula they can buy with WIC dollars; calling on the FTC and state attorneys general to crack down on any price gouging or unfair market practices related to sales of infant formula ... and increasing the supply of formula through increased exports—imports." Asked whether the President is considering use of the Defense Production Act to ramp up formula manufacturing, Psaki said the Administration is "exploring every option."

The formula shortage has been worsening for months, but a bacteria-related recall in February of powdered formula made by Abbott markedly exacerbated the situation. Four children were hospitalized with infections caused by Cronobacter sakazakii bacteria after consuming Abbott-made formula products that came from a plant in Sturgis, Mich., two of the children died, CNBC reported.

Abbott ceased production at the Sturgis facility that had manufactured products affected by the voluntary recall, intensifying industrywide supply-chain challenges for formula that had been building since 2021. The company said it can restart the Sturgis plant in two weeks following FDA approval to do so, but products will take up to eight weeks to make it onto store shelves, according to CNBC.

"The category started to see stocking challenges beginning in July 2021, and the situation has continued to worsen into 2022," said Ben Reich, CEO of retail and CPG data provider Datasembly, in a statement this week. For all of April, stockouts for formula stood at 31% nationwide.

Abbott stated in a blog post in April that it was working closely with the FDA in an effort to restart operations in Sturgis as quickly as possible. "In the meantime," the company stated, "we are working to increase the supply of infant formula by prioritizing infant formula production at our facilities that provide product to the U.S. market."