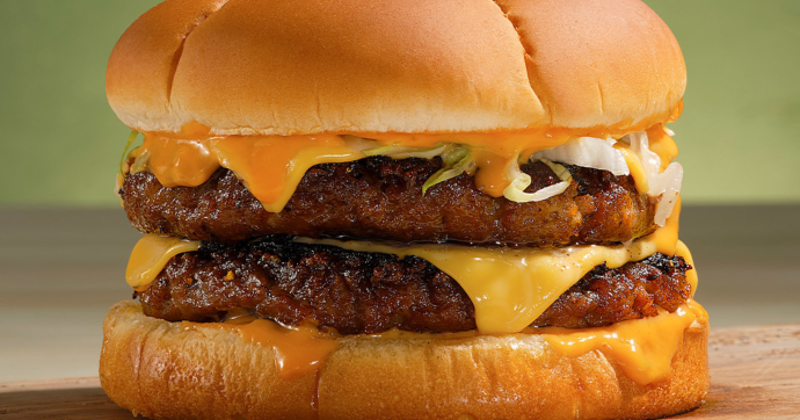 Photograph courtesy of Beyond Burger

Beyond Meat and DoorDash have teamed up for a new offering positioned as a barbecue rescue for July 4 procrastinators.

Starting July 1, Beyond Meat will offer its recently updated Beyond Burger patties in a summer grilling kit available exclusively for delivery through DoorDash's DashMart ghost convenience-store concept. The kits, which will sell for $14.99, include a Beyond Burger package (two 1/4-pound patties), an apron, a grilling mitt, grilling tools, a bottle opener and a recipe card. The kits will be available for delivery in less than an hour in 14 cities across the country, primarily in the Midwest and West.

In a news release, El Segundo, Calif.-based Beyond Meat and San Francisco-based DoorDash said the new offering provides an easy way for consumers to get backyard-barbecue essentials—especially for get-togethers where some attendees don't or prefer not to eat meat—without having to make a last-minute trip to the grocery store. A survey of 1,000 adult consumers that the supplier and delivery specialist commissioned found that 60% of respondents said they shop for barbecue supplies at the last minute. In addition, 78% of the companies' survey respondents said they want plant-based meat at cookouts and barbecues, and 65% said they are choosing plant-based options in an effort to eat more healthfully.

Additional barbecue necessities, including snacks, beverages and desserts, also are available from DashMart, the release noted. DoorDash launched DashMart in August 2020 in eight cities; the company touted the concept, which offers "thousands of convenience, grocery and restaurant items," as a new avenue through which national and local restaurant and vendor brands could reach customers. The Cheesecake Factory and Chicago steakhouse Gibson's were among DashMart's first announced partners.

Beyond Meat debuted its new "meatier" Beyond Burger in April as U.S. sales of plant-based meat alternatives continue to climb, having risen a whopping 45% in 2020. A survey from market research firm Datassential further found 30% of U.S. consumers saying they want to eat more meat alternatives.

Beyond Meat's updated offering contains 35% less fat, 35% less saturated fat, fewer calories and no cholesterol vs. an 80/20 ground-beef burger patty, according to the company. "This Fourth of July weekend, we're excited to partner with DoorDash to further our mission to make plant-based options more accessible to all," Beyond Meat Retail Sales VP Rebecca Infusino said in the two companies' news release.