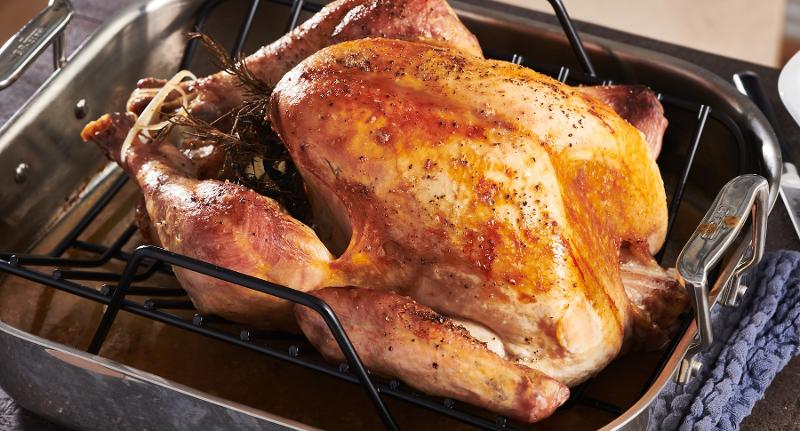 Inflation hoisted the cost of a traditional Thanksgiving dinner again in 2022, building on a double-digit increase last year, according to the American Farm Bureau Federation (AFBF).

“General inflation slashing the purchasing power of consumers is a significant factor contributing to the increase in average cost of this year’s Thanksgiving dinner,” AFBF Chief Economist Roger Cryan explained. 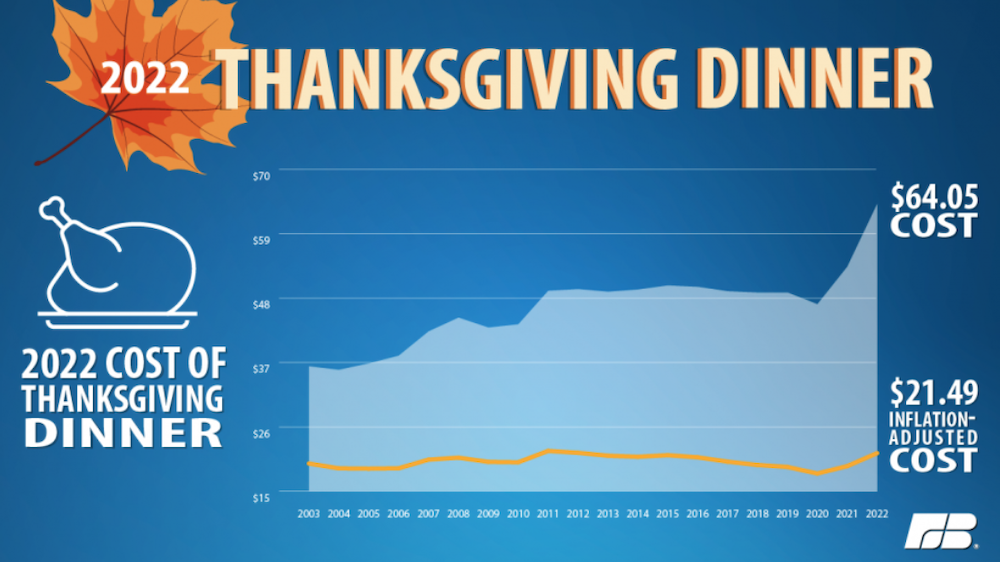 The Consumer Price Index (CPI) has been running at a 7% to 9% year-over-year increase in recent months, coming in at 7.7% in October, while the food-at-home CPI has ranged from around 12% to over 13%, registering at 12.4% in October.

“Other contributing factors to the increased cost for the meal include supply chain disruptions and the war in Ukraine,” he added.

AFBF noted that timing impacted its turkey cost estimate this year. The bureau’s volunteer shoppers checked prices from Oct. 18 to 31, before most grocery retailers began merchandising whole frozen turkeys at much lower prices. Citing USDA Agricultural Marketing Service data, AFBF said grocery stores started to advertise lower feature prices for turkey later on, as they did last year. The average per-pound feature price for whole frozen turkeys came in at $1.11 the week of Nov. 3 to 9 and at 95 cents the week of Nov. 10 to 16, a 14% decrease in one week, and the share of stores offering feature prices climbed from 29% to 60%. 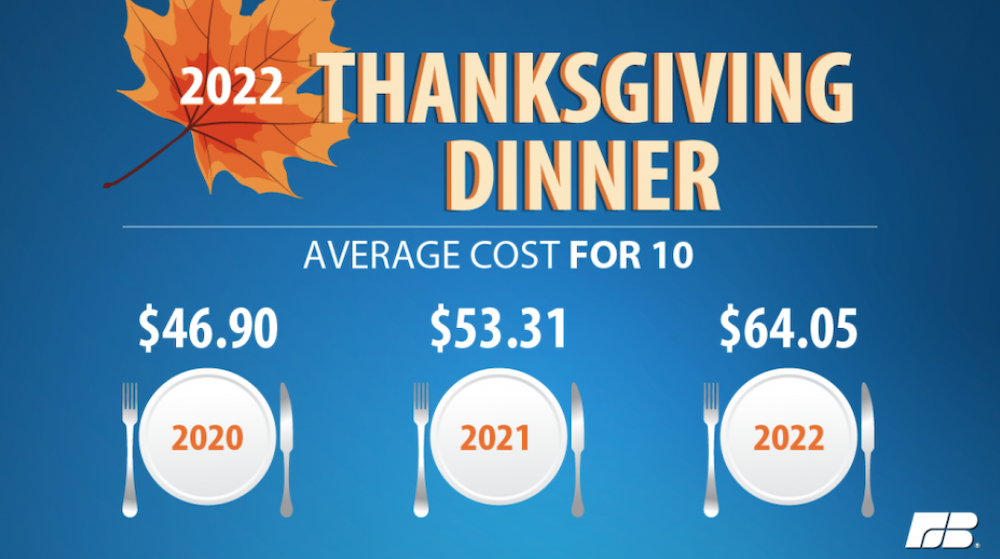 As a result, consumers who waited to buy their turkey should be able to find one at a lower cost than the survey average, AFBF reported.
“The higher retail turkey cost at the grocery store can also be attributed to a slightly smaller flock this year, increased feed costs and lighter processing weights,” Cryan said, noting that the supply of whole turkeys should be adequate, despite temporary regional shortages due to avian influenza r.

AFBF’s shopping list for the 2022 Thanksgiving Dinner Cost Survey included turkey, stuffing, sweet potatoes, rolls with butter, peas, cranberries, a vegetable tray, pumpkin pie with whipped cream, and coffee and milk, all in quantities to serve a family of 10, with ample leftovers. The national average cost was calculated through 224 surveys using pricing data from all 50 states and Puerto Rico. Volunteer shoppers checked prices in person and online using grocery store apps and websites and searched for the best possible prices without using special promotional coupons or purchase deals.

Cranberries were the only item in the 2022 survey showing a price decline, with 12 oz. of fresh cranberries down 41 cents to $2.57. Of the items with price increases, the veggie tray was the only one not seeing a double-digit gain. 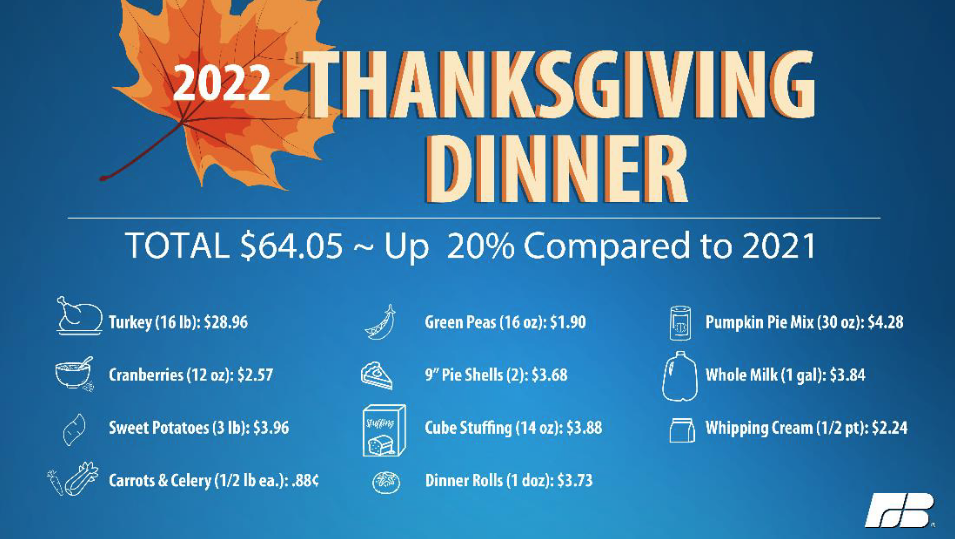 AFBF’s survey also included an expanded holiday menu with ham, russet potatoes and frozen green beans. Adding those items to the traditional Thanksgiving dinner raised the total average cost by $12.58 to $81.30 this year, marking a 18.3% overall price increase from 2021, when the price tag for the bigger menu rose about 14% (or $15.41) to $68.72.

“Farmers are working hard to meet growing demands for food—both here in the U.S. and globally—while facing rising prices for fuel, fertilizer and other inputs,” Cryan stated.

The elevated cost of Thanksgiving meal components hasn’t been overlooked by grocery retailers, which have kicked off a range of promotions to lessen the impact on consumers’ wallets.

Last week, The Kroger Co. announced that it would not shift the increased cost of turkey, which it estimated as up 20 cents per pound this year, to customers. The supermarket giant also rolled out a shopping guide with meal options that can feed 10 people for as low as $5 per person.

Meanwhile, Walmart and Aldi have enacted price flashbacks. Walmart this year is offering a Thanksgiving meal basket at last year’s prices, while Aldi U.S. initiated a “price rewind” that brings pricing levels for selected Thanksgiving-related items back three years, with discounts of up to 30% to match 2019 prices.

“We understand our customers are looking for ways to stretch their hard-earned dollar and are counting on us for quality, affordable Thanksgiving staples,” Dewayne Rabon, chief merchandising officer at Winn-Dixie parent Southeastern Grocers, said in a statement. “To show our gratitude and help our customers create memories around their family tables, we are offering incredible deals on the Thanksgiving meals and holiday essentials they want most.”