After one full year of pandemic shopping, American household grocery spending has increased 14% on average because of new or increased consumer behaviors, such as cleaning and disinfecting as much or more than before and cooking at home more, according to a report from NCSolutions (NCS), a firm that helps improve advertising effectiveness for the consumer packaged goods ecosystem.

NCS analyzed 12 months of its consumer purchase data, as well as findings from a newly fielded national survey of 2,017 adults ages 18 or older from Feb. 26 to March 2, to examine how the American grocery basket has evolved in the past year.

Spending on cleaning products increased more than any other grocery category, at 36% year over year, NCS found. Nearly all respondents (96%) say they spend the same (55%) or more time (41%) cleaning now than pre-pandemic, according to the NCS consumer survey.

In terms of how much they spend on cleaning products and disinfectants, 89% say they spent the same (54%) or more (35%) since the pandemic began. Notably, almost a third of consumers (32%) say they have no plans to go back to their pre-pandemic rates of cleaning.

Cooking at home is the new norm, with almost half (47%) of respondents say they cook more frequently now than before the pandemic.

To support more cooking at home, categories such as frozen foods (29%), staples such as dry grains and beans (28%) and baking ingredients (27%) saw the highest growth during the pandemic, according to NCS consumer purchase data. 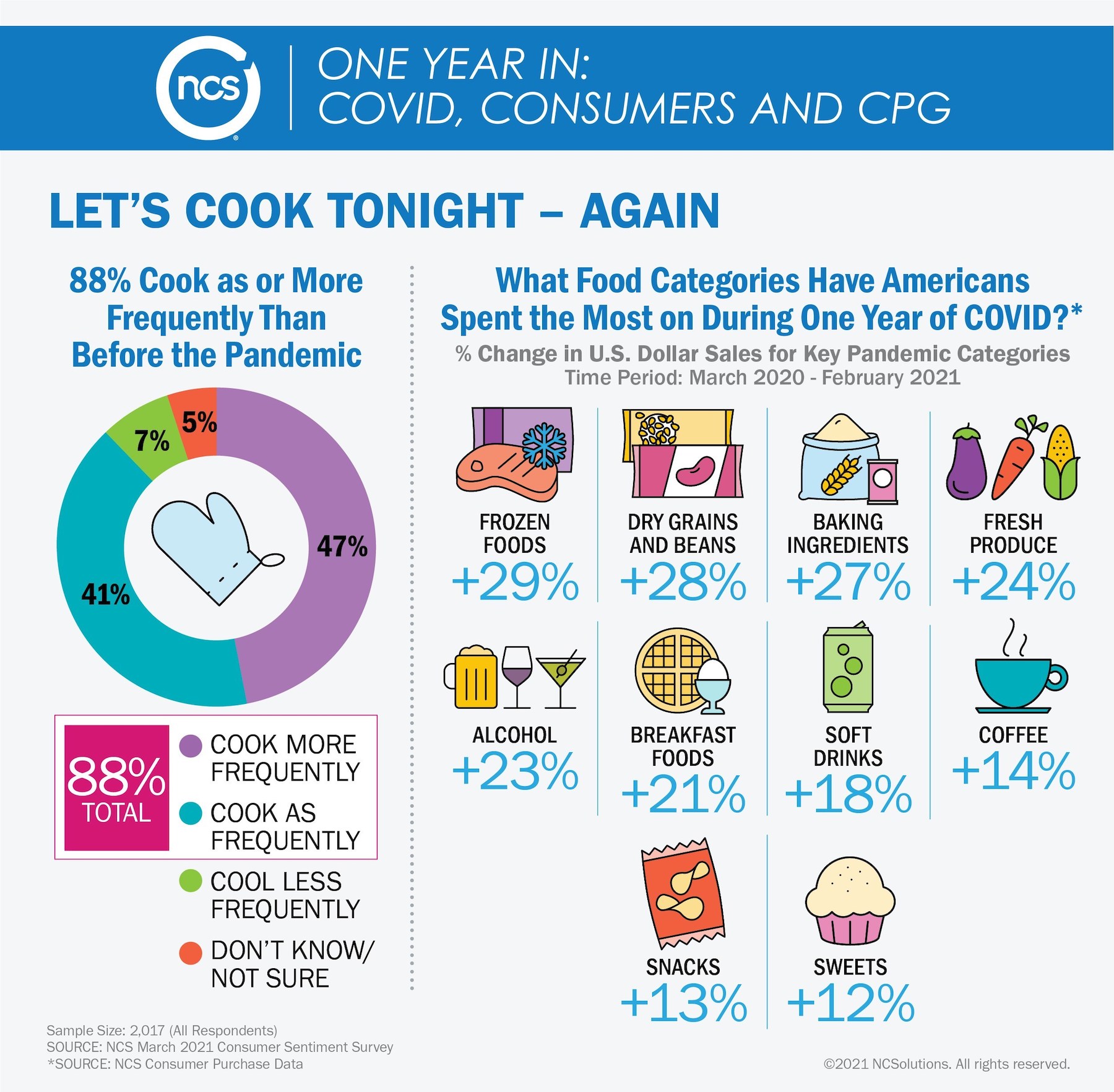 Consumers also have an increased focus on health, which is reflected in increased spending on fresh produce, up 24%, and purchases of vitamins and supplements, up 21%.

"The big question on everyone's minds is: Which of these newly formed behaviors will stick? Looking back at history, we see numerous examples of behaviors changing post-crisis. After the excesses of the Roaring Twenties and the poverty of the Depression, for instance, many people became extremely cautious about money. Some went as far as to save money in their mattresses—behavior that lasted for decades," said Linda Dupree, CEO of NCS, which has offices in Chicago, Tampa, Fla., and Cincinnati. "We expect Americans to sustain their higher interest in CPG products and activities that foster self-care and well-being—both physical and emotional—for some time."