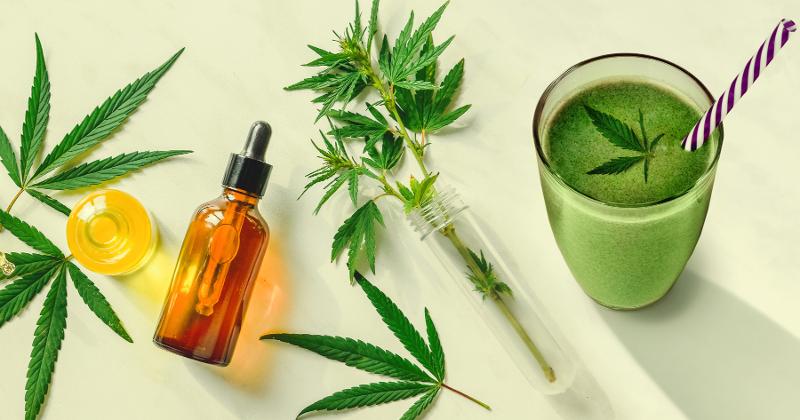 In 2022, the CBD market is expected to see sales of $1.3 billion, according to New Frontier Data, making it one of the fastest-growing product categories.

Despite projected category growth, CBD products, which contain cannabidiol, from the hemp plant, are not yet approved for use in food and beverages. To-date, products containing CBD are approved for sale in only a handful of states, with each state operating under different rules.

Looking ahead, which products are most likely to contain CBD?

Maeve Webster, president of foodservice consultancy Menu Matters in Arlington, Vt., expects to see “explosive growth” in skincare and topical products, partly because she believes there are fewer regulations than when CBD is found in a product that’s ingested. “So these products are easier to introduce.” She also expects to see a focus on tinctures.

But when it comes to consumables, Webster thinks beverages will lead the way, “given ease of transport, innovation, the dynamism of the beverage category, and the likelihood of consumers to more easily experiment with beverages than most other categories.”

According to a webinar held this fall by cannabinoid market research company BDSA and market research firm IRI, beverages constitute 5% of the CBD edibles market. However, Jessica Lukas, SVP of commercial development with BDSA, expects to see huge growth. “Beverages are the hot topic,” she says.

“Beverages grew 60% this year over 2020, so it’s huge, but off a very small base,” Lukas said. However, she pointed out, it’s a “really important category.” Drinks offer competition, she explained, to other functional beverages as well as to alcohol, as more consumers opt to abstain from adult beverages. BDSA anticipates a $2.5 billion cannabinoid beverage market by 2026.

Within beverages, we’re likely to see CBD in products ranging from seltzers and kombucha to functional/sports/performance/energy beverages, as well as nonalcoholic cocktails or spirits, she said. There are even some alcoholic products containing CBD, she says, though these present more of a challenge, “when you start to deal with intoxication or mood-altering ingredients working in tandem.” We might also, she pointed out, “see CBD offered as a more mellow or controllable substitute for caffeine.”

When it comes to food, edible CBD products make up just 14% of the market so far, and are dominated by candy, and candy is dominated by gummies, according to BDSA and IRI. Of the edible market, candy constitutes 68% of the category; chocolates account for 13%; infused foods are 6%. “[Within candy,] there’s a lot of interesting things happening beyond gummies in the marketplace,” Lukas said.

CBD as an ingredient also often goes hand-in-hand with other claims, according to Innova Market Insights. The Netherlands-based company reports that natural and vegan claims appear more frequently on launches containing cannabinoids, compared to total food and beverage launches. Vegan claims appear on 24% of launches, with cannabinoids and natural claims appearing on 22% of them.

And when it comes to the benefits of CBD foods and beverages, energy/alertness was the top active health benefit claimed by cannabinoid-infused food and beverage products, present on 7% of launches, Innova reports. Other popular claims include brain health and immune health, each of which appeared on 4% of launches containing cannabinoids.