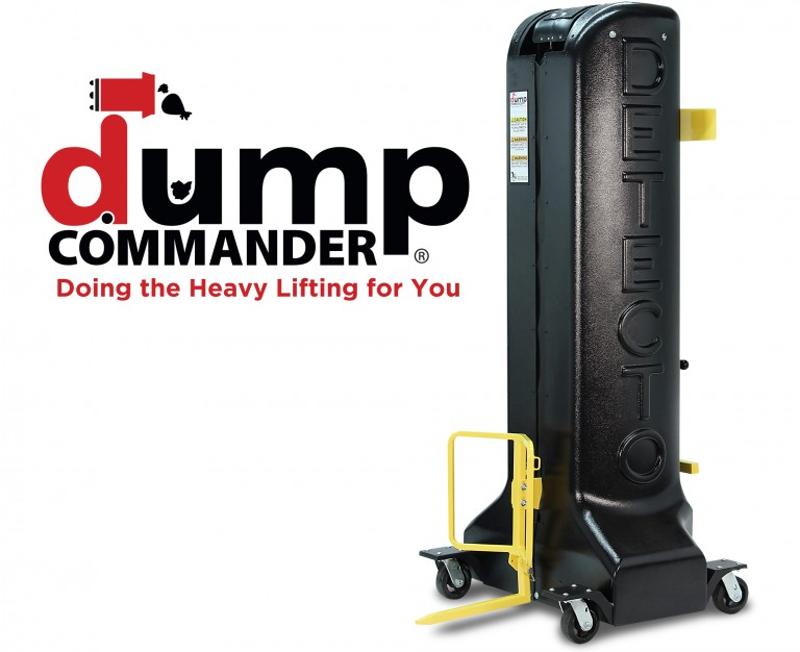 DETECTO has launched its U.S.-made Dump Commander, a trash can dumping device that is narrow and mobile enough to wheel anywhere, and offers mechanical lifting power to dump round commercial trash can-sized containers into a larger bin. The Dump Commander provides labor-saving reductions with a quick return on investment, reduces workers’ compensation claims and creates a safe work environment for trash can dumping. The unique, patent-pending device won the Kitchen Innovations award in 2016.

The rechargeable, battery-operated system, which uses a single-column chain-drive lifting mechanism, can be operated by a single person. This prevents injury due to heavy lifting, requires less manpower to dump trash cans for overall cost savings and prevents spilled trash due to breakage during dumping.

The Dump Commander quickly lifts up to 150-pound trash cans with the push of a single button and works with trash bins up to 82 inches high. The unit is operated via a hand-held pendant control on an 8-foot cord, employs a single up/down rocker switch for operation and the controller is removable to prevent unauthorized usage. The trash can dolly assembly included with the Dump Commander fits off-the-shelf round commercial trash cans.

The product typically pays for itself within one year through labor-saving reductions by requiring less employees (only one) to dump trash, combined with the fact that it requires far less dumps per day due to the unit’s ability to lift much heavier weights than two to three people manually. One of the Dump Commander’s most advantageous aspects is elimination of workers’ compensation claims—an average of $7,300 per incident—which would also pay for itself by preventing one accident.