As modern consumers’ obsession with food grows stronger, fueled by factors such as increased global tourism and the widespread availability of outside-of-the-box online recipes and food forums, the time is ripe for retailers to consider how they can add an extra dimension to the fulfillment of their food-loving customers’ cravings.

As such, grocers are taking several approaches to driving foodservice offerings into the future, from peppering on-trend food stands across the floor to creating visually enticing ready-to-order counters and even creating a sectioned-off restaurant or taproom within or adjacent to the store.

Cincinnati-based Jungle Jim’s International Market has taken its foodservice experience one step further with the opening of its airport-themed Jungle Experience Center, or JXC, that employs state-of-the-art technology allowing the retailer to connect with business partners around the world. The grocer creates a food-rooted event destination for its shoppers by incorporating these connections into planned events such as its recent movie screening party, dubbed the “Big Lebowski Blast,” as well as wine dinners and corporate events. 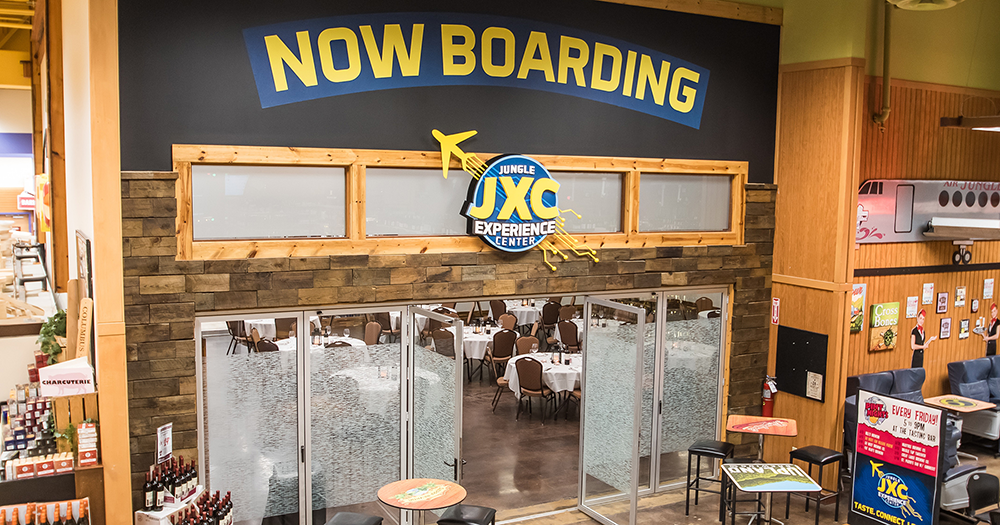 JXC Events Manager Jodi Taylor says the space gives Jungle Jim’s guests a place to “taste, learn and connect.” An example of this is its wine dinner series, she says, in which guests come in for a five-course gourmet “dinner by the bite” that they eat while tasting wines and taking a virtual tour of the featured winery.

“Through the video conferencing system, they actually get to see where the wine is made and speak to representatives of the winery,” Taylor says. “What better way to enjoy a tasting?”

The retailer also offers its unique Paradise Pavilion smoke-friendly, open-air bar to visitors of its Eastgate location, which features tempered air that helps it maintain a comfortable atmosphere even in the winter and also acts as an event space. Both spaces offer full event menus, Taylor says, which allows the retailer to see the event through “from start to finish,” which is another way it is “taking the ‘grocery store’ concept and showing guests that we are so much more.”

Retailers such as Encino, Calif.-based Gelson’s are working to find a healthy mix between in-store restaurant destinations and disruptive foodservice stations. The retailer’s new 30,460-square-foot store in Manhattan Beach, Calif., features sit-down wine and craft beer bars as well as a tapas bar. Customers can take advantage of the store’s free Sip ‘n’ Shop service, through which employees will do the shopping for guests as they eat and drink. 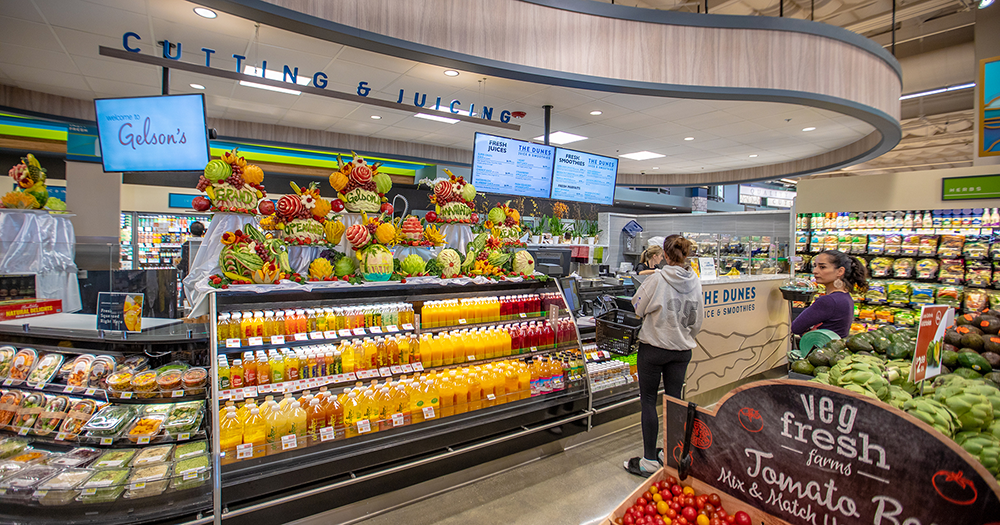 In addition to the in-store restaurants, the Manhattan Beach Gelson’s has quicker fixes available around the store, such as customized breakfast bowls and Mediterranean-inspired burgers at its Gelson’s Kitchen, a Wolfgang Puck build-your-own pizza stand and a self-service build-your-own poke bowl station. Many of these features call attention to themselves with signage featuring catchy sayings such as Cutting and Juicing at its juice station and Noshing and Imbibing at its wine bar.

While concepts such as Jungle Jim’s and Gelson’s experiential destinations can be a draw for customers, retailers without the resources to create an elaborate restaurant experience, or whose business plans do not include such a concept, can still create a destination with enticing food stands and counter.

Such is the case for Wilmington, Del.-based Janssen’s Market. Paula Janssen—whose grandfather Joseph Janssen Sr., founded the gourmet foods store—says its cafe and prepared foods are its “best marketing tool.”

“People will come to the cafe for a quick, quality meal and then venture into the rest of the store,” she says. “Then we are top of mind for items for their next special event.”

Larger retailers, such as ShopRite, a banner of Keasbey, N.J.-based Wakefern Food Corp., tend to focus attention on optimizing its foodservice offerings with smaller cafe concepts with seating instead of creating stand-alone in-store restaurants. Its enhanced foodservice efforts are evident in its new 60,000-square-foot Riverhead, N.Y., ShopRite, which opened in October and which is owned by K Thompson Foods LLC, a family-run company operated by Ken Thompson and his son Ken Jr., who also own and operate ShopRite stores in Deer Park and Uniondale, N.Y.

Its latest Riverhead store is designed to look like an old-time marketplace with a brick theme and signage for each station, reminiscent of a vintage storefront calling attention to stations such as The Bread Shop, Aunt Janet’s Bakery, Grandma Rose’s Kitchen and East End Bakery. Street signs grace different areas of the store to further enhance the marketplace feel.

Boulder, Colo.-based Lucky’s Market strives to make its customers feel “like they are at home—comfortable, safe and happy—all with a full belly,” according to Communications Director Krista Torvik. To accomplish this, Lucky’s highlights its homemade foodservice offerings with retro lights around a “Kitchen” sign designed to impart a “vintage feel to remind people of home cooking” and provide a “bit of nostalgia for the comforts of home,” says Torvik. Other signage points to the use of top-quality ingredients such as handmade sauce, she says.

Lucky’s also features trendier foodservice offerings such as a made-to-order ramen bar in adjacent to its sushi stand, where customers can “order a suggested ramen bowl or customize their own, and then belly up to the bar or take their bowl to go,” Torvik says. “The ramen and sushi bar area is designed to be a destination within the store and a comfortable place to grab a quick and delicious meal.”