Cheese had a blockbuster year in 2020, spurred by the spike in at-home meal consumption and pandemic-fueled cravings for creamy comfort foods. However, as COVID-19 restrictions eased and consumers began eating more meals away from home, 2021 saw a return to balance. Though many cheese categories saw declines last year, dollar sales remained elevated from pre-pandemic levels, and consumers continued to seek out exciting new discoveries, bold flavors and old favorites.

Chicago-based market research firm IRI reports that total deli/dairy cheese sales reached nearly $22 billion in the 52 weeks ending Feb. 20, 2022. While this is a 4% decrease over the last year, dollar sales were up 15% from two years ago. Likewise, deli and dairy cheese sales were up by 19% and 13%, respectively, compared to 2019.

With consumers stuck at home during the early months of the pandemic, shoppers gravitated toward indulgent products and spent more time perusing the deli department during stock-up trips. That momentum carried over into 2021, and it continues to drive sales.

“Deli cheese is certainly hot at the moment,” John Crawford, VP of client insights for dairy at IRI, told WGB. “There's more excitement and newness that you see in that deli section than in the dairy section. I think people are seeing new cheeses, and they're finding them pretty interesting.”

Specialty cheese sales held steady over the previous year at $4.8 billion—an increase of 23% over 2019—with cheddar, fresh mozzarella and Parmesan as category leaders. Motagnolo, feta, Gouda and havarti showed the biggest year-over-year growth, according to IRI data.

“Social media platforms such as Instagram and TikTok have made a huge impact in this category, one example being the continued popularity of #BakedFeta or #FetaPasta,” Newsome said. “With so much time spent at home, consumers are gleaning cheesy inspiration from social platforms and the explosion of ready-to-cook cheeses.”

Bold Flavors on the Rise

Cori Nobriga, senior category manager of foodservice for The Save Mart Cos., based in Modesto, Calif., has also seen increased demand for feta, along with havarti, Gouda and gruyere. “We continue to see consumers experimenting with new cheeses,” she says, “as well as [buying] their tried-and-true favorites.”

Flavored cheeses were especially popular last year, which came as a surprise to Nobriga. “Smoked cheeses, cheddars with exterior rubs, as well as infused Goudas saw great growth,” she said. “Our consumers are using cheese in such a variety of ways, from ingredients in their favorite comfort foods to the charcuterie board, as friends and families begin gathering again.”

Basch attributed the line’s success to consumers’ desire for cheeses with a little more character—whether to perk up a cheese plate or mix into mac and cheese.

Grab-and-Go Is Here to Stay

One pandemic-accelerated trend that shows no sign of waning is the dominance of the grab-and-go cheese category.

“There's been an overall shift from service deli to grab-and-go over the years, and the category is up 33% vs. two years ago,” said Crawford of IRI. Three years ago, grab-and-go accounted for 39% of total service deli sales; it has since jumped 10 percentage points to 49%. In contrast, sales of service deli cheese have declined for the last three years, including a 5% decrease in the last year.

Crawford said he believes the move toward grab-and-go will continue despite the reopening of deli service counters—for a variety of reasons. “You don't have to spend as much time in the store, you don't have to wait for somebody behind the glass, and you don’t have to take a number,” he said. “Then think about labor shortages, which we’re seeing across the board. So if you’re a grocery retailer, are you going to staff your service deli section as much as you did before? Probably not.”

American, Swiss and cheddar were the year’s grab-and-go leaders, according to IRI, with Jack cheeses seeing the biggest year-over-year growth. Presliced deli cheese gained 20% over 2019 and held steady over the last year.

“Service delis closed during the pandemic, so a lot of cheese producers were savvy and agile, and they started to slice their cheeses and ship them to stores,” Crawford said. “That's probably part of what we’re seeing with American cheese—American service cheese is down vs. two years ago, whereas grab-and-go American is up 47%.”

Basch of Point Reyes Farmstead Cheese Co. confirmed that demand for cut-and-wrapped cheeses skyrocketed in 2021, spurred by staffing shortages at independent food shops and specialty grocery stores. “They’ve either scaled back or eliminated their cut-to-order departments, including sampling,” she said, “so they just wanted specialty cheeses that were ready to go straight into the case.”

For Scott Bunse, director of deli, seafood and central kitchen operations for Dierbergs Markets in Chesterfield, Mo., the shift was all about customer demand. “Convenience items won out overall,” he said, “meaning the presliced, pre-portioned, ready-to-serve cheeses that work well with charcuterie boards.”

To make cheese shopping even easier for customers, Dierbergs added charcuterie board “destinations” near the front of the store and in the prepared foods department. 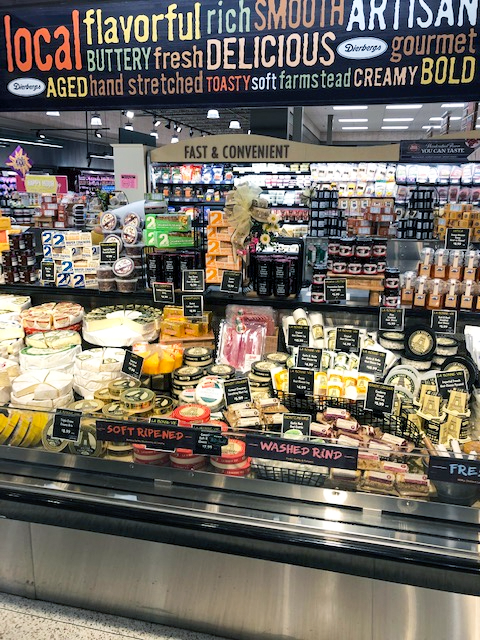 Newsome of Champignon pointed to longevity as another selling point of convenience cheeses. “Prepacked specialty cheese—like our Briette line of soft-ripened cheeses—alleviates some of the risk retailers face with limited shelf-life products, and it responds to increasing consumer demand,” she said. “We expect strong growth to continue, especially with all the logistical and economic challenges facing all of us for the foreseeable future.”

“These were on-the-go items for the most part,” Crawford said. “Schools were closed. Offices were closed. But the snack cheese category is now up 3.1% vs. a year ago. As people are going back to work and back to school, you're seeing snack cheese be the bright spot within dairy cheese.”

All forms of processed cheese saw sales decreases last year, with overall category sales dipping 8%. This is a reversal from 2020, when drooping dollar sales grew for the first time in years, from $2 billion in 2019 to $2.5 billion in 2020.

“With kids and parents being home, we saw a lot of people making grilled cheese sandwiches,” Crawford said. “It has completely crashed back down again, and now we're right back to where we were before.”

Though plant-based options currently account for only about 1% of total cheese sales, Crawford predicts that vegan cheese will be the next big growth driver for the alternative dairy category as product quality continues to improve. “I think that the focus is on that specialty area and the chunk piece of it, and not so much on the bulk shreds and bulk slices,” he said.

“Plant-based eating is no longer a trend, it’s a mainstream way of eating,” said Andy Reichgut, general manager of Violife’s U.S.-based vegan cheese business. “Throughout the pandemic we saw more and more people moving to a plant-based diet and lifestyle motivated by health, diet, environmental and animal welfare reasons.”

Reichgut noted that as producers launch new flavors and formats with better texture and taste, a growing number of consumers across the country will look for plant-based cheeses at their local grocery stores. This is true not only for vegans, he said, “but for the plant-curious who are simply looking to eat less dairy but not give up the indulgence of cheese.”