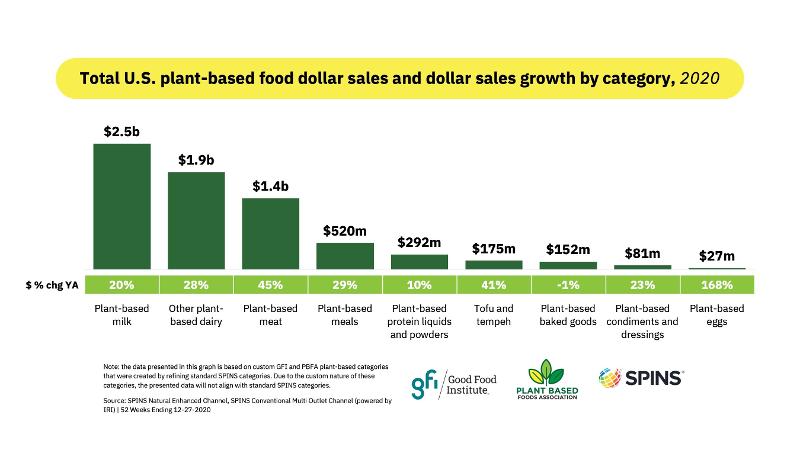 Image courtesy of PBFA and GFI

During a good year for grocery sales—and for sales of traditional animal proteins—plant-based alternatives in 2020 still outperformed food at retail overall, according to the Plant Based Foods Association (PBFA) and the Good Food Institute (GFI), using data commissioned from SPINS. The total U.S. retail food market saw 15% growth in 2020, while sales of plant-based foods rose 27% to $7 billion, the groups reported.

In comparison, FMI and the Meat Institute Foundation reported last month that more than 98% of households surveyed by market researcher IRI had bought traditional meat products in 2020. Most new plant-based alternatives buyers aren't giving up their meat and dairy purchases altogether, analysts agree, but rather incorporating more plant-based products into their diets and choosing them more often.

"The plant-based category has evolved to the point that retailers can’t limit who they consider the plant-based shopper," SPINS Head of Retail Dawn Valandingham said in a news release.

And it's not just one-and-done trials of plant-based products, PBFA and the GFI made a point to call out: Sixty-three percent of consumers buying plant-based meat alternatives, for example, are "high-repeat customers," according to the groups.

The rising sales of meat alternatives comes in part from retailers' expanded placement of these plant-based proteins alongside conventional meat products in refrigerated units, according to the groups. Refrigerated plant-based meat sales climbed 75% in 2020, they noted.

Last month, Boston Consulting Group and Blue Horizon Corp. issued a report projecting that the market for plant-based meat, egg, dairy and seafood alternatives will grow to 11% of the overall protein market globally by 2035, up from 2% today. If the pace of technological innovation and adoption accelerates and the plant-based alternatives market receives "full regulatory support," the report's authors state, plant-based alternatives' market share could go as high as 35% by 2035. In that event, according to the report, North America would reach "peak meat" in 2025, with animal protein consumption declining after that point.