Retailers should not serve or sell any romaine lettuce, the Centers for Disease Control and Prevention announced Tuesday in response to a new outbreak of E. coli infections linked to the leafy green.

The illnesses have affected at least 32 people from 11 states in the U.S.—resulting in 13 hospitalizations, with one victim suffering kidney failure—as well as 18 illnesses reported from Ontario and Quebec. No deaths have been reported. 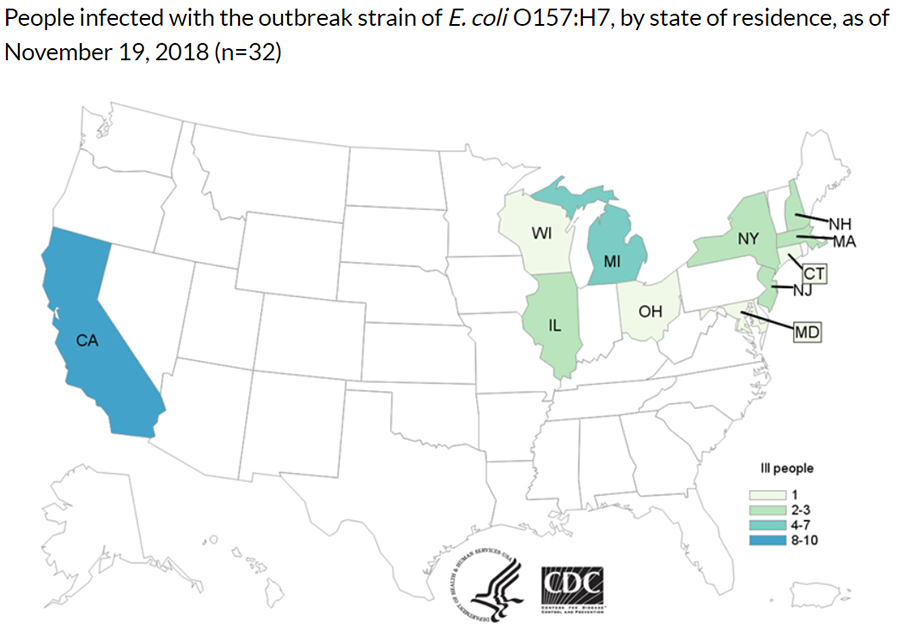 First reports of the illnesses began Oct. 8, the CDC said. The strain identified is different from the one linked to the romaine outbreak earlier this year, the CDC said, though it appears to be similar to that of the 2017 outbreak linked to leafy greens.

Just two days before Thanksgiving, the CDC is advising that consumers, retailers and restaurants avoid and discard all types of uses of romaine lettuce as the investigation is ongoing. A common grower, supplier, distributor or brand of romaine lettuce has yet to be identified.

“This advice includes all types or uses of romaine lettuce, such as whole heads of romaine, hearts of romaine, and bags and boxes of precut lettuce and salad mixes that contain romaine, including baby romaine, spring mix and Caesar salad,” the CDC said in a statement. “If you do not know if the lettuce is romaine or whether a salad mix contains romaine, do not eat it and throw it away.”

The warning echoes the approach taken this past spring, during which health officials issued a warning to throw away all store-bought romaine, resulting in mass consumer confusion around what product was safe or unsafe to eat. Sales of leafy greens and shopper confidence in the category have since dropped.

"A recall of this magnitude especially during the holiday week will impact not only romaine, but other leafy green vegetables such as spinach. Retailers will be pulling romaine and possibly all other lettuce/leafy greens from their shelves (a process called quarantining) until the source is found," said Michael Droke, partner with the international law firm Dorsey & Whitney, which specializes in the food and agriculture industries.

The outbreak earlier this year exposed a dire need for enhanced communication between the FDA, the CDC, retailers and suppliers to streamline their traceability efforts and provide consumers with cohesive information around the source of the outbreak and which products are affected. Industry organizations including the Produce Marketing Association, the Food Marketing Institute and United Fresh are all collaborating with the FDA and the CDC for traceability and communications solutions, while some retailers, such as Walmart, are tapping into blockchain solutions.

The retailer recently announced its new requirement that its suppliers of leafy green vegetables input digital, end-to-end traceability event information into blockchain database IBM Food Trust network to help reduce the amount of time it takes to backtrack a food item from the store to the source. By embracing blockchain and effective communication, the FDA, CDC, retailers and suppliers could determine the source of an outbreak in a matter of seconds, rather than days, or sometimes weeks, and ultimately provide consumers with concise food safety information.