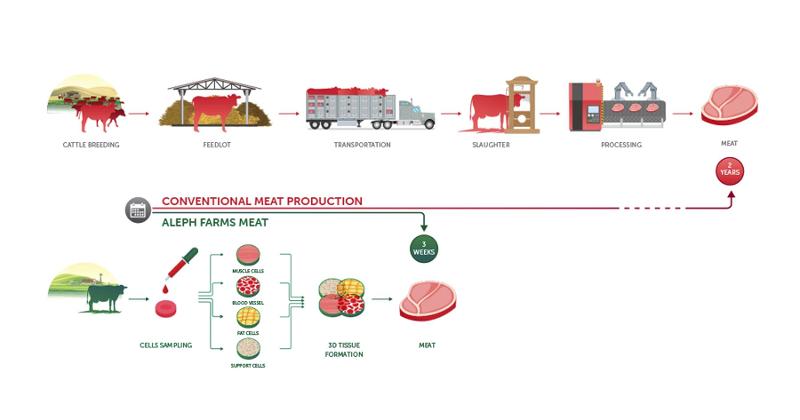 With an eye toward innovations to meet future demands for beef, meat producer Cargill has announced an investment in Aleph Farms, a cellular meat producer working toward a commercial launch of lab-grown steaks.

Cargill said it was participating in an $11.65 million Series A investment round led by VisVires New Protein and joined by several other investors looking to move Aleph Farms’ product from prototype to the commercial marketplace. Aleph, based in Israel, grows meat directly from beef cells using a 3D tissue engineering platform. In December, it achieved a world-first by demonstrating it could grow a steak directly from bovine cells.

The investment in Aleph Farms builds on Cargill’s other partnerships in alternative protein. In 2017, the Minneapolis-based company was an early investor in Memphis Meats, a company leading the way in development of cultured meat. Cargill also is an investor in plant-based protein through Puris, a firm that has launched a new pea-based protein. These investments complement the company’s investment in its traditional animal protein portfolio, which has totaled more than $1.5 billion over the several years.

“We all need to work together to address the increasing global need for protein in the coming years, especially as more consumers move into the middle class and the demand for protein increases,” Jon Nash, president of Cargill Protein North America, said in a release. “We have a responsibility to look at all innovations that can help us feed the world.”

According to Cargill, demand for protein is expected to grow by 70% over the next 30 years as the global population increases.

Aleph says its products are potentially revolutionary as they plan to begin building bio-farms and move toward a limited consumer product launch with steak grown under controlled conditions within three to five years.

Aleph said its “slaughter-free meat” involves taking a sample of animal cells from a real cow and replicating them outside of the animal. Its goal is to produce “healthier, more humane” meat, with the same taste, texture and structure as farmed meat without the antibiotics, environmental footprint and contamination that comes with conventional meat production.