In this age of in-store bars, restaurants and live entertainment, America’s grocery store has outgrown its traditional model as a place to simply buy food. Taking note of industry leaders such as Whole Foods Market, Wegmans Food Markets and Bristol Farms, a growing number of grocers have expanded into experiential dining destinations to entice a more discerning customer base.

Yet at the core of these evolved foodservice offerings remains consumers’ favorite meal-time mainstay: chicken.

Chicken continues to reign as the most popular protein, with consumption consistently higher than its poultry and meat counterparts, thanks to its relative affordability, healthfulness and culinary adaptability. According to a recent consumer trend report by Winsight Grocery Business’ sister research firm Technomic, based in Chicago, 70% of consumers eat chicken dishes at least weekly, and 42% order chicken from foodservice one a week or more.

Most grocers at the very least offer rotisserie and/or fried chicken as part of retail foodservice. The pervasiveness of chicken as part of a retail foodservice program is as significant to the category as deli ham is to lunchmeat. But today’s consumers crave more from their chicken entrees, beyond the rotisserie or chicken wing, and retailers must implement creative ways to differentiate their offerings.

“The challenge is in making chicken items stand out,” says Charles Winship, manager of consumer insights for Technomic. “With so many operators trying to capitalize on the protein’s popularity, consumers can afford to be discerning when deciding where to make their purchases.”

With 33% of consumers poised to eat more chicken over the next year, according to Technomic’s Center of the Plate: Poultry report, retailers have an opportunity to increase consumers’ purchase frequency as well as draw new shoppers to the category by expanding their chicken assortment, introducing unique flavors and highlighting their products’ quality and production attributes.

Over the past few years, many operators have highlighted simple and straightforward chicken preparations to drive cravings, particularly for fried chicken. But given the vast accessibility of chicken at foodservice, retailers are striving for more innovation. While some retailers might be hesitant to “fix” what isn’t broken, a simple spin on their existing offering might serve them well in appealing to consumers’ desire for variety of preparation styles and flavors.

Take the boneless Buffalo wing, for example: Simply adding a small bun, celery or lettuce and a little ranch or blue cheese can easily transform this chicken program staple into a new application, says Eric Le Blanc, director of marketing, deli, for Tyson Foods Inc., based in Springdale, Ark.

“We can give shoppers the idea of how to make that something different,” Le Blanc says. “When we look at the potential of chicken, nobody knows how high up it is. It’s certainly exciting what can be done and I think it's all about having a passion to provide something to the shop that’s new and exciting and satisfying.”

Retailers can further differentiate their chicken programs through new applications as well as exciting flavors. According to Technomic, 50% of 18- to 34-year-olds say they’re interested in trying chicken entrees with new or unique flavors. Growing ingredients on chicken dishes, according to Technomic’s Ignite menu data, include options such as pepper jack cheese, lemon, avocado, poblano and honey. Given chicken’s culinary flexibility, retailers can turn to a variety of coatings, sauces and spices to provide one-of-a-kind options. 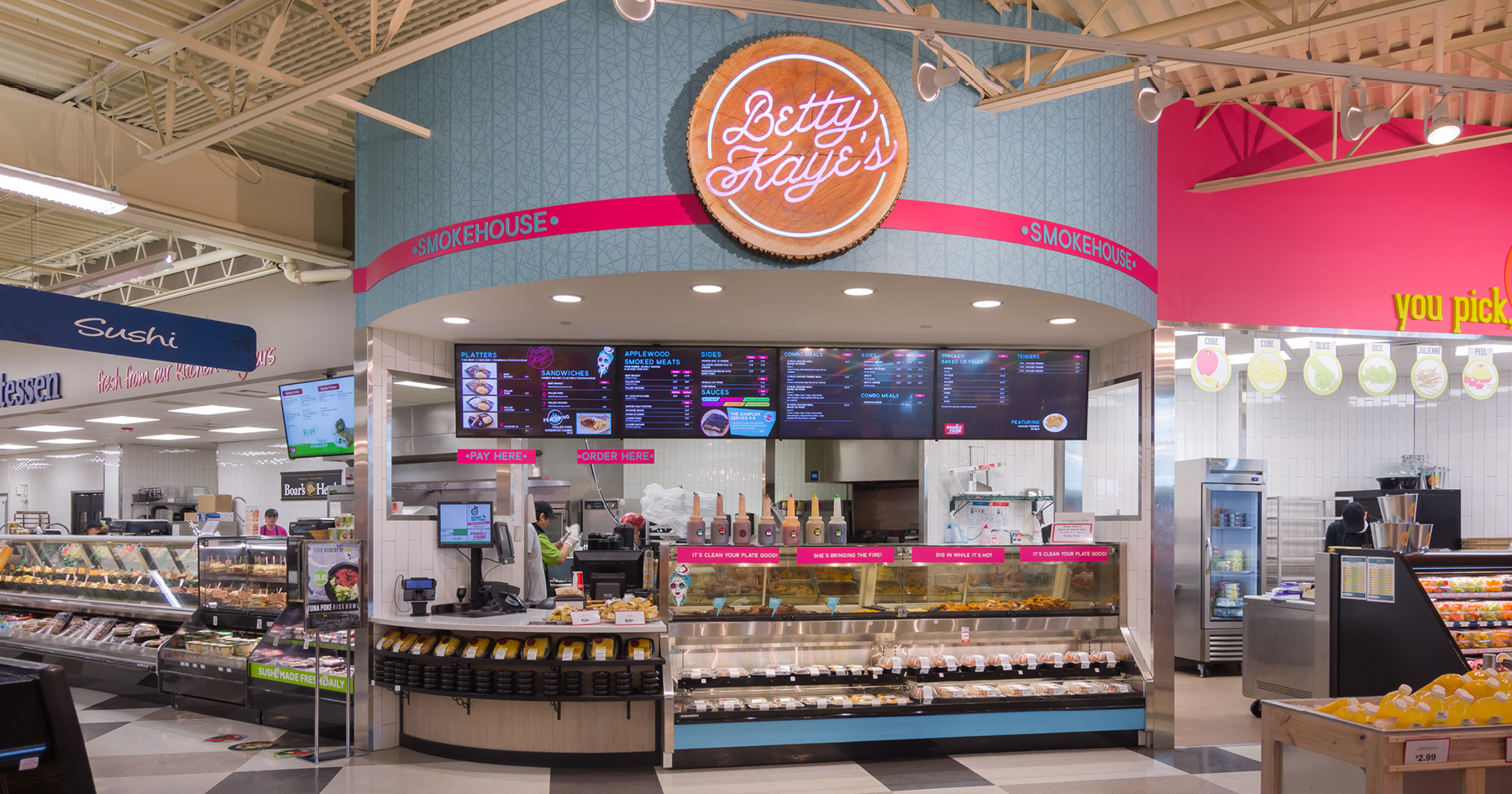 “Younger consumers often consider which sauces and condiments they want before they even decide where they’ll order chicken,” Winship says. “For operators, this means sauces should be considered as potential traffic drivers.”

Interesting batters and coatings can also help drive appeal, because 42% of consumers are more likely to order fried chicken if it’s hand-breaded or hand-battered, according to Technomic’s report. Marketing hand-breaded chicken, with simple batters featuring a few spices or complex coatings, helps convey freshness and uniqueness to consumers.

Giant Eagle, based in Pittsburgh, has established a strong following with its hand-breaded chicken entrees and party platters, featuring its signature hand-breaded chicken breasts, thighs, drums and wings, with a 12-piece serving available for $11.99. And San Bernardino, Calif.-based Stater Bros. Markets also highlights its signature Cleo & Leo exclusive fresh offerings, including hand-breaded fried chicken and specialty sandwiches and wraps, as well as a full line of prepared party trays and grab-and-go meal solutions.

A large part of chicken’s appeal to such a wide consumer base is its perceived healthfulness. Forty-one percent of chicken consumers say quality and taste is a primary reason for eating chicken, according to Technomic’s report, and 78% of consumers classify chicken as healthy or very healthy—more than beef, pork, seafood and vegetarian or vegan options.

As consumer demand for health, and the changing definition of better-for-you foods, continues to rise, foodservice operators must adjust their menus to cater to the current wellness trends. For instance, once a menu staple, chicken nuggets are losing favor with consumers due to their perception as being overly processed and unhealthy, according to a recent report by CNBC. Instead, chicken tenders, strips and boneless wings are now at the tops of foodservice menus.

Marketing freshness, quality and clean labels can help communicate chicken’s flavor, quality and health attributes. As such, highlighting additive-free or unprocessed products will be increasingly key in appealing to healthy consumers, while antibiotic-, hormone- and steroid-free claims are top of mind for consumers when purchasing chicken.

Major limited-service restaurant chains are taking note. Pizza Hut, for example, has announced its commitment to going antibiotic-free by 2022, saying that it will serve only antibiotic-free chicken for its wings and pizza toppings, while Atomic Wings promotes USDA-certified, organic, humanely raised and antibiotic-, hormone- and cage-free chicken as central to its overall menu and concept positioning.

Similarly, ShopRite, based in Keasbey, N.J., launched a new rotisserie-style, cage-free chicken raised without the use of antibiotics as part of its commitment to offer customers convenient, better-for-you meal solutions. Last year, the retailer also converted its eight-piece grab-and-go hand-breaded fried chicken line to a no-antibiotics-ever offering, made from chickens raised in a cage-free environment and cooked fresh daily in trans fat-free oil. Both offerings are developed in partnership with Perdue Farms and marketed under the ShopRite Kitchen by Perdue label.

In response to consumers’ growing desire for more information about the food they eat when dining out, the Washington, D.C.-based National Chicken Council recently launched a new website for foodservice operators, providing educational resources around how chicken is raised and processed.

Featuring information about the production process for broiler chickens, answers to frequently asked questions and a glossary of chicken labeling terms, the Chicken Check In Foodservice website is designed to equip cooks and retail staff members with the knowledge they need to address consumers’ questions around the sustainability and animal welfare attributes of their chicken offerings.

“Foodservice patrons are increasingly looking to operators to provide knowledgeable answers to their questions about the chicken they are eating out of home,” said Tom Super, spokesperson for the National Chicken Council, based in Washington, D.C., in a statement. “Knowing the basics and making staff aware of this resource during employee training can go a long way toward ensuring that you satisfy customer curiosity.”