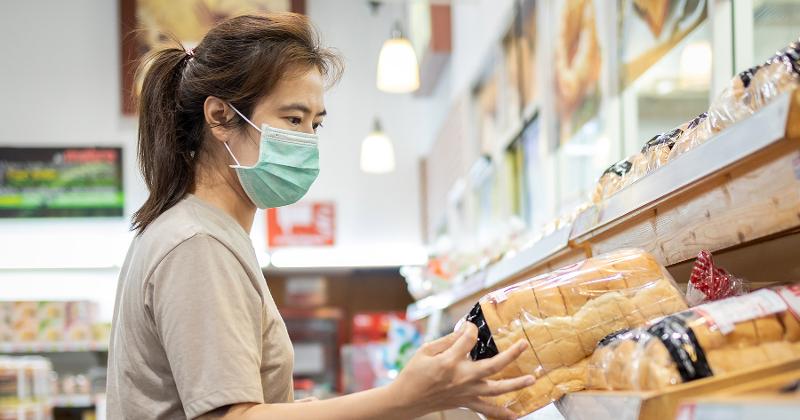 Food sales remained very strong the last full week of April. Free of the effects of Easter this year or last, the week ending April 26, 2020, provided a glimpse at the elevated everyday demand as a result of more meals having moved to at-home. At the same time, the shift to fewer but bigger trips continued and upended patterns remained in terms of day of the week, day part, online ordering and brand and product choices.

Since the onset of coronavirus in the U.S., the results for the dairy, deli and bakery departments have been mixed. Dairy has emerged as a sales powerhouse, and the week of April 26 was no different. While the packaged baked goods aisle is doing well, the limited service/assortment and/or shutting down of bakery and deli counters across many stores have had severely negative impact on sales in areas such as deli prepared, bake-to-order cakes and other indulgent bakery items. 210 Analytics analyzed the IRI weekly sales findings, made possible by the International Dairy Deli Bakery Association (IDDBA).

Total store sales, including the fresh perimeter, gained 22%, while total edibles, excluding fresh, were up 31.4% over the week of April 26 vs. a year ago. Boosted by yet another good week for meat, the total perimeter increased 23.1% as sales in the deli and fresh bakery departments pulled down the average. Dairy had another strong week, with sales up 37.9%.

Sales Growth vs. Comparable Week in 2019

“These results are very encouraging,” said Jeremy Johnson, VP of education for IDDBA. “Going up against Easter 2019 last week made it unclear if demand was coming down or how much was the effect of the holiday week. Sales gains for the week of April 26 vs. the comparable week in 2019 were right back up in the double digits, and that bodes well for the rest of May. Yet, Easter provided important lessons to address the new normal in holiday celebrations with Mother’s Day and Memorial Day coming up later this month.”

For dairy, sales gains have been double digits over the comparable week in 2019 for seven weeks running, including the week going up against Easter 2019. Dairy sales for the week ending April 26 were up 38.6%, driven by continued high interest in milk, cheese, egg, butter and creamers. These same items have been in high demand ever since the panic buying week of March 15.

“Dairy became a sales powerhouse during the mid-March panic buying weeks and has remained on top ever since,” said Abrielle Backhaus, research coordinator for IDDBA. “This week, every subcategory in dairy was up double digits, ranging from 11% for yogurt to 77.4% for butter. With many drivers, whether quarantine baking or cooking, everyday demand for all things dairy remained strong.”

On the Retail Feedback Group’s Constant Customer Feedback (CCF) program, many shoppers continued to write in about limited supply in some dairy categories that is causing some upward pressure on pricing in some areas. One shopper wrote, “The butter was way overpriced, especially when the farmers are having a tough time.” Another said, “Eggs continue to be hard to find. I went to the store with the specific purpose of buying everything I needed for the week but there were no regular eggs, and specialty eggs are even more expensive than they already were pre-virus. Seems like the price for European butter and cheese have come up a lot too.”

Butter and eggs continued to have the highest sales growth during the last full week of April vs. the comparable week in 2019. Natural cheese had the highest increase in absolute dollars, with year-over-year sales up $108 million, followed by eggs, which sold an additional $54 million, and milk, with an additional $62 million.

The impact of inflation can be seen on the differences in volume and dollar sales. “The one-week look shows an 8.7 percentage point gap between volume and dollars for the week of April 26 vs. year ago for butter, for instance,” said Jonna Parker, team lead of fresh for IRI. “But the effect of supply and demand is even more evident for eggs, where dollars were up 53% and volume nearly half as much. The latest four-week look shows even sharper contrasts between volume and dollars for eggs with a 34.6 percentage point gap. Other big volume/dollar gaps were seen for milk and cheese, all items in high demand.”

For the week ending April 26, both deli cheese and meat (random weight) came in ahead of the comparable week in 2019 with double-digit increases. The severe declines for deli prepared (random weight and some private label UPC) seen since the onset of coronavirus in the U.S. continued. It is important to note that for some retailers, results would have been impacted by self-serve and/or full-service areas being closed. For all three deli areas, sales patterns started to shift significantly the week ending March 15. Deli cheese and meat sales jumped by double digits, and deli prepared very quickly started to flatten out and decline in subsequent weeks.

Random-weight deli meat sales rebounded from their flat week when going up against Easter 2019. Sales were up nearly 16.9% in dollars and 11.6% in volume. Patterns relative to grab-and-go vs. bulk counter sales remained the same as seen in prior weeks. While service counter sales made up 68% of deli meat sales this week, sales were down 4.7%. Sales for service counter deli meat that has been previously sliced for grab-and-go but still sold non-UPC was up 80%. But not everyone is a fan of this solution, as seen on CCF. “We had to go to another store for lunch meat and meats as you can only buy prepackaged. Not the brands we want, nor the amounts needed. You can socially distance at the counter even if it means order, shop and pick up. We will be going to another store until this is resolved.” Customer comments on package size variety for the reasons of budget, household size and variety also continued to come in on CCF.

Meanwhile, prepackaged, refrigerated luncheon meats with a UPC continued to outperform random-weight deli meat, with dollars up 24.6% and a higher increase for volume sales as well. However, the difference compare with prior weeks was much diminished.

“Packaged cheese continued to be an attractive option for consumers,” said Angela Bozo, education director for IDDBA. “In part, that is the influence of deli service being closed for some retailers, but retailers tell us consumers are increasingly moving toward packaged as a safety measure as well. Some stores have added plexiglass dividers in the service departments much like those seen at checkout, which may provide a solution to open service departments back up.”

The positive impact of preslicing deli cheese for grab-and-go availability continued as well. Whereas service counter sales was up just 6.7%, cheese packaged for grab-and-go, but still non-UPC, was up 89.6%. It is important to keep in mind this is a smaller share of total random-weight deli cheese (32%), but it remains an important takeaway to help drive sales. With the total sales of fixed-weight cheese being more than seven times bigger than random-weight deli cheese, the much higher increase signals significantly higher absolute dollar gains.

A big question on everyone’s mind surrounds deli operations in both the self-service and full-service areas. In the meantime, sales remained down for deli prepared, affected by closed counters and shopping pattern changes. As shoppers increasingly try to reduce the number of trips to the store and engage in online ordering, deli prepared food sales were down 36.3%, with volume off 34.8%. Sales were off for all offerings and meal occasions, whether breakfast items, combo meals, trays or deli pizza.

“Deli prepared remained a hard-hit area,” said Eric Richard, industry relations coordinator for IDDBA. “At the same time, frozen entrees, including pizza, have enjoyed double-digit growth since the onset of coronavirus so there is demand for time-saving, convenient solutions, but engagement with deli-prepared remained low. Some states are allowing restaurants to reopen, albeit with limited capacity, which may pose another challenge for deli-prepared sales in the next few weeks. Making sure that deli-prepared offerings, whether prepackaged or made-to-order, are on the radar is crucial for everyday solutions or holidays such as Mother’s Day coming up.”

Last week was a down week for bakery as a result of going up against Easter 2019. But the week of April 26 saw renewed engagement with packaged baked goods, cookies and crackers, though continued down results for the in-store bakery.

The packaged baked good aisle had a strong week, with sales gains for all items, whether indulgent or functional. In some cases, such as bakery snacks as well as pastries, Danishes and coffeecakes, this was the strongest performance since the week of March 15. Functional items, including fresh bread and rolls, had another very strong week with gains, with another $59 million sales vs. the comparable week last year.

Other baked goods, including packaged cookies and crackers in UPC/fixed-weight packages, continued to track well ahead of 2019 and also reached their highest point since mid-March. Packaged cookies increased nearly 25% and crackers nearly 24%. Meanwhile, the baking aisle continued to enjoy highly elevated sales as well, up 74.3%, and frozen baked goods also increased, up 44%.

Much like deli meat, cheese and prepared offerings, in-store bakery sales continued to be affected by closed or reduced operations. Sales for the in-store bakery (non-UPC, random-weight items, no UPC items) were off by more than 17% vs. those during the same week last year, though most areas performed better than they have in the past two weeks.

The widely covered meat shortages in consumer media caused a renewed run on meat the first week of May, which likely caused a subsequent boost for other departments, including dairy and bakery. Going into May, several states have released detailed plans for reopening in phases. In some, restaurants could reopen starting May 1, though often with social distancing and occupancy rate restrictions in place. This may further affect deli-prepared results, in particular. The reopening of restaurants in these states may provide an indicator of consumers’ mental readiness and economic ability to reengage with foodservice. For the foreseeable future, it is likely that grocery retailing will continue to capture an above-average share of the food dollar.