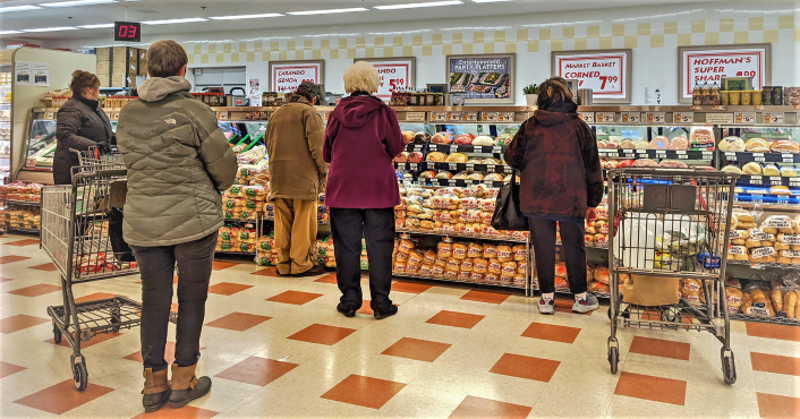 Consumers made more meals at home in January as they sought to save money, stay out of the cold and stay safe amid the omicron-fueled surge in new COVID-19 cases, IRI's latest monthly shopper survey indicates.

Eighty-two percent of meals were prepared at home in January, an uptick from about 80% over the past several months and the largest share of meals made at home since February 2021, according to IRI's January grocery-shopper survey.

And while shoppers are acutely aware of rising prices at the grocery store—with 95% of those polled by IRI in January saying they're worried about food inflation—a meal at home still generally represents a less-expensive alternative to a restaurant meal. Grocery prices were up 7.4% year over year last month, the Bureau of Labor Statistics noted in its January Consumer Price Index report; prices at limited-service (fast food and fast casual) restaurants, meanwhile, rose at an even faster clip, climbing 8% over January 2021 levels.

Consumers' sensitivity to both rising prices and a nationwide rise in COVID cases, as well as their continued strong appetite for convenient meal solutions, made for another strong month for deli and prepared-foods sales. Deli department dollar sales totaled $4 billion in January, up 10.6% from a year ago. And although inflation played a big role in the increase in dollar sales, volumes and units sold climbed, too, in deli meat, deli prepared and deli entertaining.

"The deli department had an all-around win in January 2022," said Jeremy Johnson, VP of education for IDDBA, in IRI and 210 Analytics' monthly deli sales update. In particular, he said, the success of deli prepared in January, with dollar sales up 15.3% vs. a year ago and unit sales up 4.6%, "underscores that people are looking for a little help in planning, preparation and cleanup." That need, he added, is one that deli can meet either via total-meal solutions or as part of a hybrid prepared/scratch-made approach.

Big winners for the month in the deli department included trays, entrees and soups and chili—all saw unit sales and dollar sales rise vs. the year-ago period. That's against a backdrop, too, of a decline in meat purchases overall—especially among price-sensitive shoppers—as inflation has accelerated.

"Deli now plays a big role in both everyday and holiday meal occasions," IRI Team Lead for Fresh Jonna Parker said in January's deli report. "We see huge growth in everything that is convenience-focused, not just in preparation, but in all steps from planning and shopping to preparation and cleanup." Parker added that she "would love to see deli prepared and entertaining work more closely with the meat and produce departments to provide solutions for the common hybrid meal approach—meaning shoppers do some cooking on their own in combination with easy heat-and-eat solutions."

And emphasizing in-store inspiration, Parker suggested, will be key: Eighty-six percent of grocery shopping trips took place in person in January, and 65% of those polled last month said they plan to do all of their future shopping in store. Just more than 3 in 10 shoppers (31%) said they expect to do some grocery shopping online and some in person going forward.