Picked over or mostly empty meat cases are a sign of the times. Grocery stores are being overwhelmed with an influx of shoppers seeking to stock up. A walk-through of the meat departments at Winn-Dixie, Publix and Walmart showed mostly empty shelves, with just some sporadic items—often products with low household penetration such as chicken hearts, beef tripas and plant-based meat alternatives.

In the middle of these unprecedented times, shoppers are returning to the familiar—putting meat back in the center of plate. Retailers are working around the clock to keep their stores stocked; processing plants are ramping up capacity to attempt to keep up with the orders flooding their systems; and distributors are trying to divert supply from foodservice to food retail. 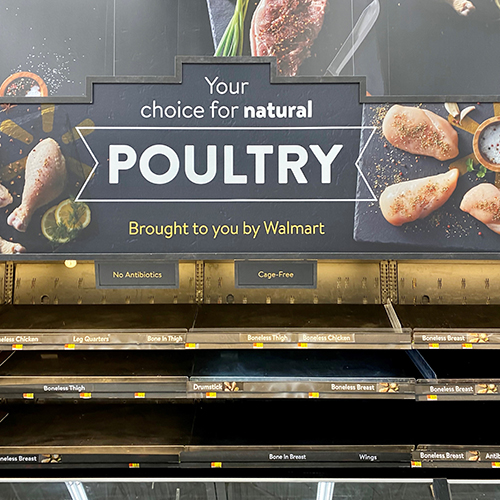 Ground is big and one of the first things that sells out. Whether beef, turkey, chicken or pork, grind sales are gaining very quickly as versatile and easy-to-prepare items. But unusual times call for experimentation as well. At one of the Publix stores I visited, I met Melanie Johnson, a millennial shopper who added a pork and beef roast to her cart. When I asked her what she planned to make, she said: “I don’t even know how to cook these, but now is the time for my family to eat nutritious foods and build our immune systems.”

Johnson also told me about advice from her mother, which she obviously heeded while making her purchases. “My mom said to also look for dry beans as a backup in case the food supply gets low—not that I know how to cook dry beans. But I guess I’m going to finally learn how to cook.”

A Closer Look at the Meat Case by Species

Fresh Chicken: Fresh chicken gained more than $16 million, or 6.1%, during the week of March 8 vs. the comparable week in 2019. Dollar, units and volume sales are all accelerating. Generating more than half of total chicken sales, chicken breasts sold an extra $6.2 million, or 4.5%. Consumers also flocked toward recipe-ready chicken that gained more than $1.5 million in the one week, up 8.7%. Chicken thighs gained more than $3.7 million (12.5%) and chicken legs increased nearly $1.2 million, up 6.5%.

Fresh Pork: Sales are quickly accelerating as well, at 8.6% for the week ending March 8. Units and volume turned from losses in the longer-term view to increases in unit and volume in the one-week view, at 5.0% for units and 3.9% for volume. Making up nearly half of all sales, pork loin added nearly $1.5 million in new dollars, or 2.7%. Pork ribs were the biggest winner in absolute dollars, up $3.6 million, or 21.2%, followed by pork shoulder blade, up $2.5 million, or 21.1%. Smoked ham sales also increased significantly over the latest week, at 4.4%.

Deli Meat: Deli meat generated more than $117 million in sales the week of March 8, which was up 4.8% over the comparable week in 2019. Deli ham and turkey each generated an additional $2 million in sales, up 6.2% and 5.9%, respectively.

The number of school closures, social distancing guidelines and other COVID-19 related measures significantly sharpened the week of March 15, leading to further sales surges. Sales updates will be provided once available. Meanwhile, please join us in thanking our #SupermarketSuperHeroes, truckers, packer/processors and ranchers for all they do to keep the food coming. #MeatFeedsFamilies.