Continue to Site >>>
Edit
Photograph courtesy of The Fresh Market

With the rise of plant-based foods and "flexitarian" consumers, the year ahead is well-positioned for increased innovation and interest in the produce department—and variety has never been more plentiful. Retailers are diversifying their assortments of fruits and vegetables, from dragon fruit to bok choy and purple Brussels sprouts, encouraging consumers to explore specialty and ethnic varieties from around the globe.

With more options covering a range of robust flavor profiles and exciting color pallets, consumers are increasingly bringing produce to the center of the plate. According to a recent study by Chicago-based C+R Research, in partnership with Frieda’s Specialty Produce, 68% of shoppers plan to serve more vegetable-forward dishes this spring, and 66% are looking to try new varieties such as colored cauliflower and rainbow carrots over classics such as kale and artichokes.

That interest in exploration is good news for retailers, because the same study revealed that 73% of shoppers will choose one grocery store over another based on the variety offered in the produce department. As such, aggressive retailers are stepping up their efforts with special selling events, in-store demos, tastings and promotions to familiarize shoppers with diverse varieties and drive growth in the specialty and ethnic category.

A Taste of the Tropics

Specialty and ethnic fruits are up 12% in dollar sales and up 9% in volume compared to a year ago, according to Idaho Falls, Idaho-based market research firm Category Partners. While overall share of the produce department’s sales in these items remains relatively small, tropical varieties are fueling the category’s growth, particularly with sales of dragon fruit growing 16% and sales of cactus leaves growing 27% over the past year, according to Category Partners data.

Once limited in availability and viewed as intimidating to prepare, tropical fruits and vegetables have become a staple in retailers’ produce departments as consumers become more inspired to experiment with cultural cuisine and authentic flavors.

The Fresh Market, based in Greensboro, N.C., recently began expanding its tropical fruit selection to satisfy shoppers’ craving for diversity, featuring varieties such as jackfruit, dragon fruit, cherimoya and kiwi berries. The retailer pairs daily in-store samplings with educational resources to introduce both its shoppers and employees to new specialty items.

“The most striking trend right now is flavor,” says Vic Savanello, VP of produce for The Fresh Market. “Our produce team members are able to try all of our new products so they can learn about an item’s taste, attributes and what makes them special overall. By getting our team excited about our offerings, they help our guests try something new.”

Savanello predicts that passion fruit, lychees, rambutan, jackfruit and soursop will become as commonplace as mango and papaya, with yellow dragon fruit specifically growing given its sweet floral flavor and crunchy, edible seeds. To eliminate the intimidation factor for shoppers, The Fresh Market also offers tropical varieties in value-added formats, such as pre-cut and ready-to-eat jackfruit, and provides educational resources such as its digital catalog of jackfruit tips and tricks, which breaks down preparation techniques and recipe inspiration, such as Jackfruit Carnitas Tacos. 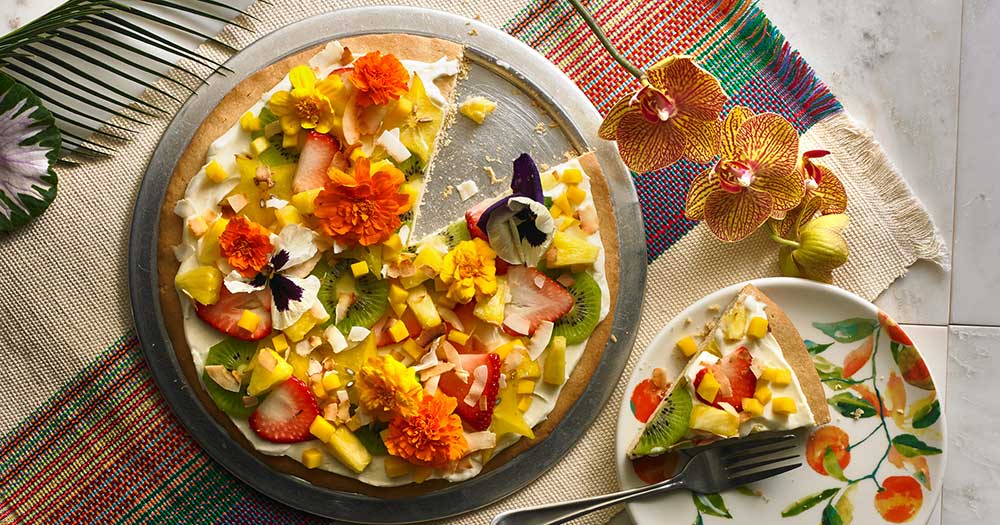 In-store events and cross-merchandising with familiar products are also key to building shopper awareness and confidence around specialty items. Central Market in Dallas recently hosted its new Taste the Tropics event at all of its store locations to highlight the more than 50 varieties of tropical fruits it now carries in the produce department. From March 6 to 19, the retailer showcased global flavors from Mexico, the Caribbean, South America and Central America—including papaya, sapote, tamarillo, star fruit, rambutan and aloe vera—infused throughout the store’s departments to inspire creative applications. For example, the fresh meat department offered several tropical marinades, such as Caribbean Jerk and Guava Barbecue, available for chicken breasts and pork tenderloin.

A Taste of Asia

Asian food is among the fastest-growing cuisines in the U.S., and as consumers explore authentic dishes during dine-out occasions, they are increasingly seeking out those same flavors to bring home. What’s more, Asian-Americans are the fastest-growing ethnic population with significant buying power, according to Nielsen, with 72% of Asian-Americans purchasing more fresh vegetables and 29% purchasing more fresh fruit per household than the total U.S. population. As such, retailers are stocking up on Asian recipe stales such as Shanghai bok choy, Napa cabbage, ginger and lemongrass to satisfy demand.

Frieda’s Specialty Produce, based in Los Alamitos, Calif., offered promotional support during the Chinese New Year, from Feb. 5 to 19, to help retailers celebrate Asian culture and realize the opportunity to attract shoppers who are familiar with or curious about Asian culture. The company showcased top-selling items such as kumquats, pummelos and mandarin oranges—fruits that are traditionally gifted during Lunar New Year—and guided retailers toward merchandising items with other popular Asian products such as daikon, wonton wrappers, kimchi and edamame to create an in-store experience that will drive foot traffic.

“Our strategy is all about education and discovery of our items to help show consumers specialty produce is delicious, nutritious and easy to use in everyday dishes,” says Alex Berkley, Frieda’s sales manager. “Our training techniques have proven to be successful, as specialty produce is no longer the exotic and misunderstood category the produce aisle. Now more than ever, shoppers are interested in trying new varieties of produce.”

Foodservice also plays a major role in the introduction of Asian vegetables, says Robert Schueller, director of public relations for Melissa’s Produce, based in Vernon, Calif. As such, micro-sizes of traditional, popular Asian produce, such as petite bok choy and petite Shanghai bok choy, have grown prevalent among mainstream audiences due to their familiarity, approachability and convenience.

While Shanghai or baby bok choy is a smaller and more tender version of conventional bok choy cabbage—and is among the most nutrient-dense foods in the world—petite Shanghai bok choy is an even smaller variety. The item featured among Melissa’s Asian Essential product line, packaged in convenient 1-pound clamshell containers, uniformly trimmed and separated for quick preparation and zero waste.

However, Schueller says Melissa’s organic ginger saw the most significant growth over the past year for a specific reason.

“Now that we get [organic ginger] from Peru, it’s available on a year-round basis,” he says. “As retailers continue to increase organic products and offerings in-store, that became a trend fast because of its increased availability.”

A Taste of the Rainbow

It’s long been said that, for those looking to be healthier, it’s important to eat a colorful diet by way of nutrient-dense fruits and vegetables. From greens to reds to yellows to purples, the options have never been greater. Consumers are crazy for vibrant, Instagrammable foods that bring excitement to any meal occasion, and specialty produce offers a source of enticing, natural color that can brighten up any recipe, from golden turmeric smoothies and baked goods with persimmon glaze to roasted rainbow carrots and curry with purple sweet potatoes.

“We’ve seen a huge push for nutrient-dense and color-rich produce,” Berkley says. “We’re seeing large growth in produce items as Stokes Purple sweet potatoes, as they not only add color to the plate, but provide nutritional benefits that can’t be found in other varieties, such as more antioxidants than blueberries.”

Fennel, purple asparagus, sunchokes and pink lemons are all among the top-growing vibrant varieties that are helping consumers get excited about making produce the focal point of a meal. In March, The Fresh Market introduced some colorful fruits and vegetables through weekly promotions, such as Harry’s Berries, which are “strawberries that boast a rich red color and contain a sweeter than average flavor, and purple artichokes that are rich in antioxidants and have a buttery, nutty flavor,” Savanello says.

Purple produce is among the most popular emerging specialty varieties, including purple Brussels sprouts, which offer a slightly nuttier and sweeter flavor than their green counterpart. Abundant in anthocyanin flavonoids, purple Brussels sprouts also boast a number of health attributes because they’re rich in antioxidants and anti-inflammatory properties.

“One of my absolute favorites, purple Brussels sprouts, has now quickly become a favorite among our guests as well as a staple in our produce department,” she says. “They are very similar to a green Brussels sprout, but they are a little sweeter, nuttier and slightly less dense so they cook faster.”