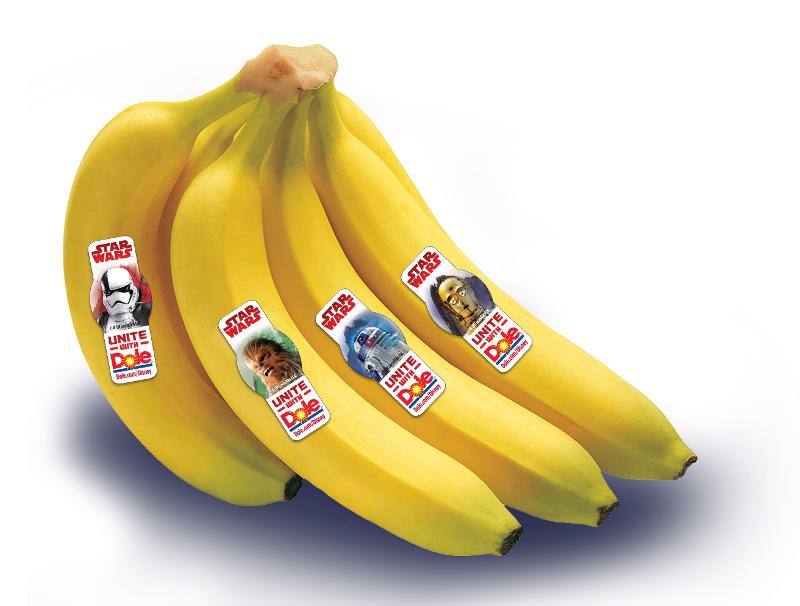 The 18-week healthy living initiative launched Oct. 8 in supermarkets nationwide features characters from Star Wars: The Last Jedi characters on hundreds of millions of DOLE fruits and vegetables. Since Dole and Disney launched their nutritional collaboration last year, the program has totaled more than 3 billion servings of fresh produce.

“The Star Wars universe is enormous and its appeal and archetypes span multiple generations,” says Bil Goldfield, director of corporate communications at Dole. “Having Dole products supporting this campaign—and Star Wars characters identified with a healthy eating—will connect with families across the galaxy.”

The campaign will also include a dedicated microsite, digital interactions, a downloadable app and logger and social media programs. Plus, Dole will release three sets of limited-edition DOLE banana stickers inspired by the film, as well as a broad assortment of berry and vegetable products with some featuring Dole’s first-ever “takeover” packaging.

The “Unite for a Healthy Galaxy Sweepstakes” encourages fans to scan DOLE fruits and vegetables to collect and share Star Wars content to be entered in a weekly drawing for a chance to win one of the 18 remote-controlled, voice-activated BB-8 toys or Star Wars: The Last Jedi figurines.

Dole chef and director of culinary nutrition Mark Allison worked closely with Lucasfilm to create 12 original fruit and vegetable recipes inspired by Star Wars: The Last Jedi characters, droids and vehicles as well as icons from the classic saga. The result is a complete menu of appetizers, lunch and dinner entrees, salads, drinks, smoothies and desserts – such as “Tatooine Blue Milk,” an original vegan beverage inspired by the blue milk scene introduced in Star Wars: A New Hope.

“Unite for a Healthy Galaxy” is the latest campaign in a series of healthy living collaborations between Dole Food Company and Disney aimed at helping parents encourage their kids and families to make healthier food and lifestyle choices. An initial program celebrating Disney’s Moana in fall 2016 was followed by “There’s Beauty in Healthy Living” in March in honor of Disney’s Beauty and the Beast and this summer’s “Fuel Up with Dole” dedicated to Disney Pixar’s Cars 3.