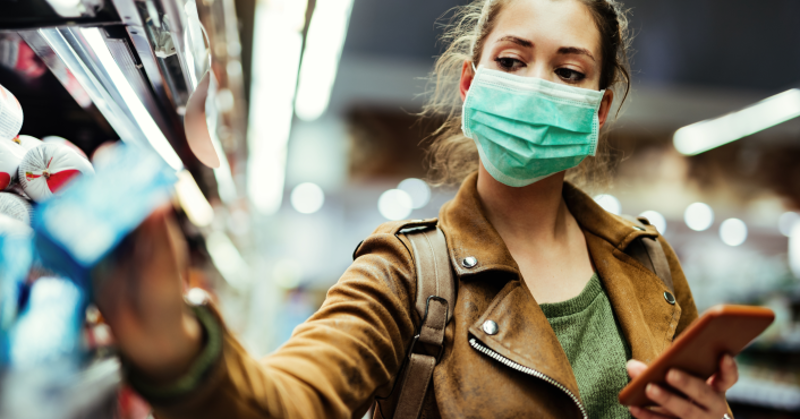 Jonna Parker is principal of market researcher IRI's Fresh Center of Excellence. She spoke recently with WGB about where grocery shoppers are and aren't adjusting their purchasing behaviors in response to rising inflation and how retailers can meet consumers in a "weary and wary" moment. Here, in Part 2 of that interview, Parker talks about the need she sees for more suggestive selling in the fresh department and what it will take to use social media and other online platforms to engage omnichannel shoppers more effectively.

Christine LaFave Grace: What's the gap that you see between where grocery retailers are with their digital engagement efforts, especially in fresh, and where they could be?

Jonna Parker: You don’t need a Super Bowl ad to be successful anymore. We can literally, now, with data, serve specific ads to specific people in specific moments, and certainly with a push strategy of having a QR code or a message of “Click here to follow us on Instagram,” that engagement is entirely possible now. And it’s much more cost-effective than any of the types of marketing that we needed to do 20 years ago to get new products or new ideas out to the marketplace.

Beyond seizing on opportunities to use better data to create more-targeted, more-effective ads and other online messaging, what do you wish retailers would embrace more than they currently are?

1000% the idea of suggestive selling. There is not an experience you can have online anywhere else where, when you are looking online at one item, it doesn’t suggest competing items but rather complementary items.

I think the concept of suggestive selling is now what consumers expect. They want you as a retailer, if [they're] buying a power tool, to mention that you should also buy a charger, and here’s where you can get this other thing, and here’s an idea of how to use it. We don’t do that with food! And we don’t eat in a silo.

Think about solutions, not silos. You think about how easy it would be to [do suggestive selling] at the shelf, in the store, online, in your social feeds—but especially in fresh, we’re not doing that. The data’s right here, and we’re not doing it.

There are is some really innovative stuff that is hitting the marketplace borne out of the needs that consumers have, but they’re getting lost at the shelf or in the conversation around, “Where should I put this?” in the store. Let’s say you have a protein-packed, fresh-baked granola bar in the bakery or you have a single pound of frozen ground beef ready for a recipe in the freezer door—because consumers aren’t expecting or looking for those [solutions] in-store today, use digital [to introduce them]. The recipe-minded mom may not know she can find a pound of ground beef in the freezer case alongside a meal kit.

If you’re doing something really dramatic and exciting, think about what storage you have it in, and then push digital. “Hey, Denver, this new frozen meat is hitting Target tomorrow.” You have to drive the demand, and you can’t do it when those feet are not walking the aisles because they don't know what's there.

I bring this up in frozen and I bring this up in bakery a lot because what we have taught consumers to expect from an in-store bakery and an in-store meat case is not what we’re capable of doing. But if you do something different, you’ve got to do the push to get those feet to go look for that item.

I think we have the products and the assortment that we need as an industry, but if you bring in something new and radical, how you use your digital and social engagement to surprise and delight and push is so important. You can’t just accept that I’m going to go find it.

When it comes to this idea of helping consumers make the meal instead of just selling them a pound of ground beef, what kinds of meals are consumers gravitating toward today? The Beef Checkoff Program noted in a blog post recently that a recipe for Classic Beef Meatloaf was the site’s top trending recipe, and other recipes highlighted on the site include things like taco salad and stuffed peppers—things that struck me as the kinds of meals we were eating growing up in the '80s and '90s. Do you see an interest in nostalgia at the dinner table, whether from the angle of millennials and Gen Zers being hungry for comfort food and/or consumers looking to stretch their budgets?

I think the generation piece is interesting. I don’t think everything is necessarily generational; I think it’s household-based as well. If you’re a younger millennial and you happened to start your family in your early 20s, you’re now behaving a lot more like a Gen Xer because you have many mouths to feed and you’re trying to figure out how to stretch that dollar. The difference though in the generations is where they’re inspired from and where they educate themselves, and that is increasingly digital and not passed down.

We have not, as an industry, embraced the digital revolution as much as we could, but I think as it relates to generations, the other piece to keep in mind is, what we want kind of isn’t one thing. I get asked this a lot: “Why is there a competing trend between healthfulness and comfort?” And yet both exist throughout the week; they do not compete.

I’m staring at my little coffee cake right now—I’m a healthy flexitarian; however, I need my little treat in the morning. And I love that I can buy it in an individually wrapped small nugget, right? So I think when it comes to meat and indulging in comfort foods and nostalgia, at this moment, our weariness wants us to bring a sense of comfort, especially to our families. We are cooking at home more, and again, it might seem hard to make the pad Thai you love from the restaurant down the street, so you’ll DoorDash that, but gosh, I really want a good home-cooked meal—things you grew up with. Mac and cheese is absolutely one of Gen Z’s favorite foods, even though it is not the most exciting thing.

We see this in the deli/prepared-foods space; we see it in the bakery space—this dichotomy that yes, people sometimes want comfort, and they don’t know how to make comfort food well, but it’s also a little bit less intimidating to make comfort food from scratch than it is to make some of these more experiential things. There’s a ton of people who are excellent home chefs who would never deign to make sushi.

It gets back to the intersection of the trade-up and down that’s happening at the consumer level. When we back up from our desks and think about it as humans and shoppers, the idea that taco night could be so much cheaper at home, but we hadn’t done it in a while, is because it was so much easier to get some of the ethnic and explorative foods out [at a restaurant].

One of the things that is so interesting from the past two years is that the No. 1 growth driver in deli prepared entrees is sushi. And grocery-store sushi is now ubiquitous. It is the kind of thing you don’t want to make yourself, and it is to me the perfect example of what a deli should have. And right after sushi, the fastest-growing type of cuisine in the deli is American comfort food.