Tyson Foods has been talking a lot lately about the importance of inspiration and education. They are essential in grocery, and they go hand in hand with execution. While it’s vital to provide resources for shoppers who need help creating meals, it’s just as critical to focus on the basics.

Tyson asked thousands of shoppers who had purchased or considered purchasing prepared chicken products from their grocer’s deli in the past three months about their experience, and about half of them said they had experienced deli failures. In comparing their answers to those gathered from another group just one year earlier, Tyson found that persistent problems had not improved much, and they were actually worse in some areas. From product problems to staffing woes and general deli issues, dissatisfaction was common when it came to product execution. What’s more, the research suggested a growing trend in which shoppers are learning to tolerate deli failures as a trade-off for the convenience of purchasing prepared foods1. For retailers, that’s an unsettling takeaway, and not an acceptable outcome. How can shoppers expect to create a meal featuring prepared foods they’re proud to serve when they are disappointed with the products or the department itself?

In another experiment, Tyson asked families to make dinner using deli products for a week, shopping at familiar stores in their home areas. The outcome for this was that regardless of the store, all participants were dissatisfied with the options because they were not educated about how to use the products to create a meal2. Kids were especially unimpressed when it came to making meals with prepared foods from the deli and shared sentiments such as, “It was vomitosis.” 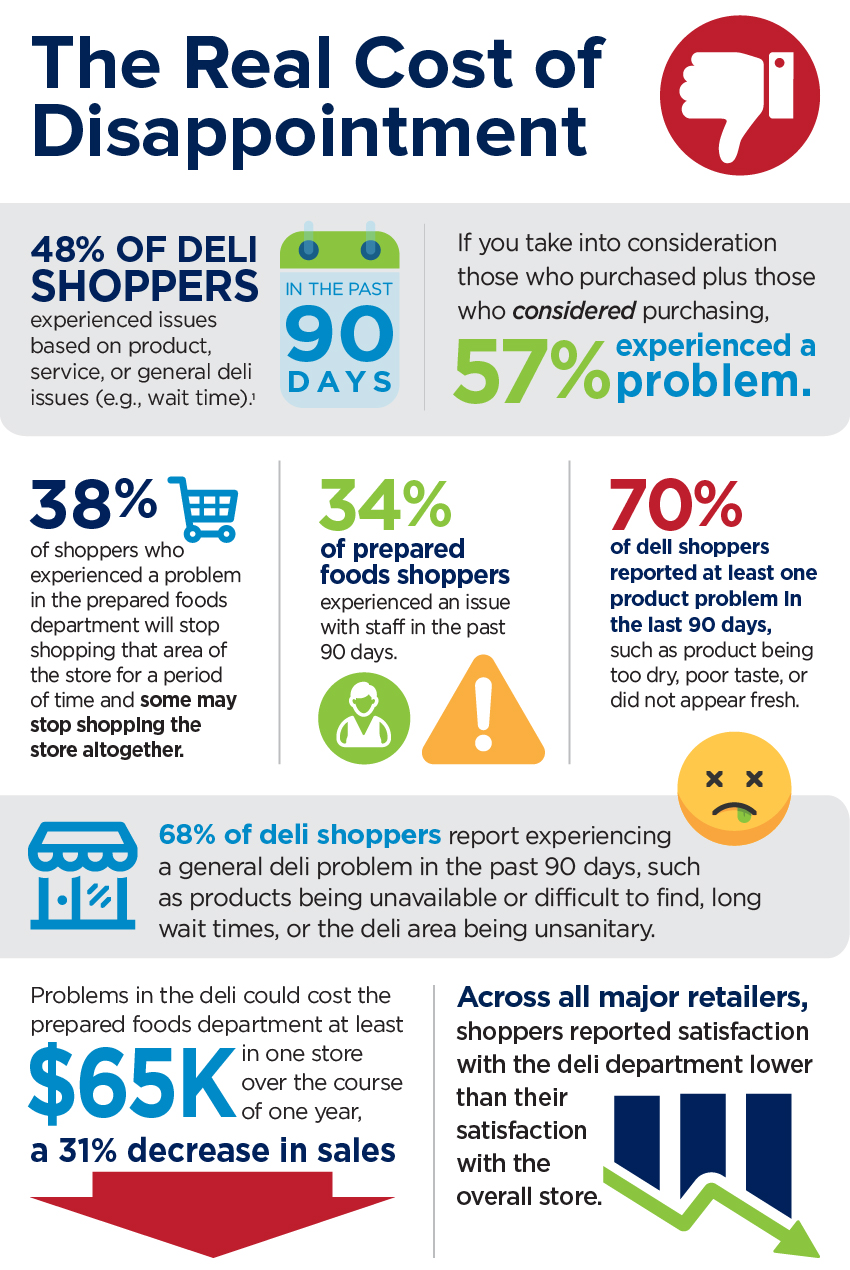 Most people have heard the saying, “The definition of insanity is doing the same thing over and over again and expecting different results.” It’s time to disrupt the cycle of disappointment and focus on what retailers can do to provide a more satisfying experience for prepared-foods shoppers and their families. One of the most encouraging things Tyson has learned is that if shoppers can feel good about serving a meal featuring prepared foods just one time, they will feel good about visiting the department again, and that brings repeat business to the store3.

To do that, deli’s mission must be threefold: equally focused on consumer experience, inspiration and education, and in-store execution. The mission begins by motivating shoppers, using digital messages focused on easy meal ideas featuring prepared foods. It continues by guiding them through the store with educational resources such as recipe cards and clear signage. By scheduling production time to correlate with peak demand, consumer expectations can be met for product quality and an overall experience that will bring them back again.

Failure should not be an option

Nobody wants dinner to be “vomitosis.” Consumers have more choices now than ever before, and they are willing to go elsewhere to find the satisfaction they seek. What happens in the deli influences overall shopping habits and has a direct impact on the department and overall store sales. In partnership with suppliers, grocery retailers have all the needed resources—in the deli and throughout the store—to help shoppers create easy meals they can be proud to serve. Grocers must learn to recognize and leverage those assets.

Find out more about the unique ways Tyson Deli is approaching prepared foods at https://www.tysonvelocity.com/exclusive60