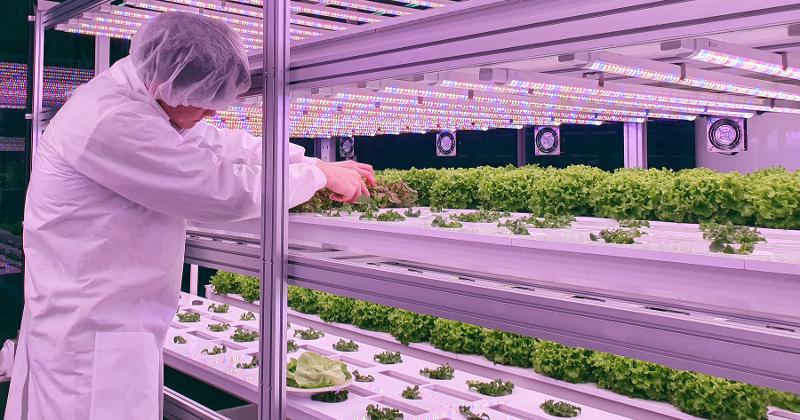 As high-tech indoor and vertical farming facilities see their presence grow across the United States, retailers must be mindful and deliberate about safeguarding the trust that consumers have in grocery-store produce, a food-safety director with FMI­–The Food Industry Association asserts in a recent blog post.

Ashley Eisenbeiser, senior director of food and product safety programs for FMI, notes that 85% of Americans say they have confidence in the safety of fresh fruits and vegetables they buy from a supermarket, according to FMI­’s The Power of Produce 2022 report. But as more indoor farms come online in markets across the U.S., it's crucial to recognize the unique food-safety challenges that indoor produce production can carry, Eisenbeiser writes.

Controlled environment agriculture (CEA) operations, such as hydroponics and indoor farming, have gained in popularity as consumers seek fresh produce that is sourced locally. Older generations (boomers and Gen Xers) report a greater interest in locally sourced and grown produce, while younger generations (millennials and Gen Zers) have a greater interest in organic, sustainably grown, and hydroponic or greenhouse-grown produce, according to FMI’s report.

As such, the footprint of indoor farming facilities is growing. Earlier in April, vertical farming company Kalera opened a 90,000-square-foot facility in Aurora, Colo., that will locally grown lettuce and microgreens to Denver area residents. The facility is Kalera's fifth domestic farm, joining a U.S. footprint that includes farms in Atlanta and Houston as well as two in Orlando.

Also this month, indoor farmer Square Roots and food distributor Gordon Food Service opened a new facility in Springfield, Ohio, that will produce herbs such as basil, cilantro, dill and parsley, as well as salad mixes and microgreens, according to a release. This is the fourth farm Square Roots has built in a partnership with Gordon Food Services and its first in Ohio.

In addition to the positive flavor and sustainability attributes associated with the "locally grown" label, CEA food production is also touted for eliminating some of the challenges associated with growing produce, such as inconsistent rains, droughts and pests, Eisenbeiser writes. However, she notes, indoor farming "is not without its own challenges."

“One misconception is that produce grown indoors is safer than traditionally grown produce,” she wrote. “While indoor farming may reduce or eliminate some potential sources of contamination (e.g., wildlife, domestic animals, and birds flying overhead), food-safety risk factors associated with CEA operations remain. In some cases, the food safety risks with indoor operations are similar to traditional operations, and in other ways, they differ and are similar to the risks in a manufacturing environment.”

For example, the U.S. Food and Drug Administration notes in its report on the contamination of packaged leafy greens during the summer of 2021 that the moist, warm environments in greenhouses and similar CEA operations can help support the growth of bacteria, including pathogens often connected to foodborne illness outbreaks.

To avoid foodborne illness outbreaks and other contaminations, Eisenbeiser advises that retailers have a supplier approval program in place; monitor and evaluate the food-safety performance of approved suppliers on an ongoing basis; and purchase products from reputable vendors that have implemented strong food-safety management programs, meet all food safety regulatory requirements (such as the Produce Safety and Foreign Supplier Verification rules established by the FDA Food Safety Modernization Act) and are certified and have annual audits from a Global Food Safety Initiative program.

“All food safety risk factors must be evaluated and all identified hazards must be controlled,” she wrote.