The best-selling PLU by far in Harmons’ bulk sections is its Build Your Own Trail Mix Bar. Grocery Buyer Kimball Wilson says customers love this section of the store, where they can choose from 15 to 20 items, including nuts, dried fruits and more indulgent items such as chocolate chips and M&M’s.

“We have a lot of customers who are health-conscious and want to have extra nutrition when they’re indulging. Trail mix is a perfect example of that,” says Wilson, who uses one PLU for the bar to make it simple and encourage sales.

Sales of nuts and dried fruits are on the rise as consumers seek convenience with nutrition. According to Netherlands-based Innova Market Insights, launches of snack nuts and seeds are strong, with a compound annual growth rate of 11.1% from 2014 to 2018.

Nuts are the fourth most popular snack item behind candy, fresh fruit and crackers, especially among consumers 35 and older, according to the 2018 Snacking Occasion Consumer TrendReport by Chicago-based market research company Technomic, a sister company of WGB. Fifty-three percent of this group said they consume nuts at least once every three months. Dried fruit was less popular, consumed by 25% of those surveyed.

Consumers who purchased these items at least occasionally (once every 90 days)
Base: 1,500 consumers
Source: Technomic

Most of Harmons’ nuts and dried-fruit sales come from its bulk section, as well as the adjacent Fresh Pack section, which contains bulk items the stores have packaged in clamshells.

Bulk sales outpace those of Fresh Pack but both are growing and both have different customers, Wilson says. “The Fresh Pack consumer likes the ease; the bulk consumer has a price-saving perception and likes the environmental impact of less packaging,” he says.

While classic options sell best in Harmons’ bulk and Fresh Pack sections, Wilson says, “fun flavors add variety and keep things exciting, but the sales pale in comparison to the average raw or roasted, salted variety of any nut.”

Popular flavor-forward items include apple cider vinegar cashews, chile-covered mangoes, coconut curry cashews and tamari pumpkin seeds. “Customers want something exciting and this is a fun way to increase your fruit and nut consumption,” he says. “These things may not have the volume of their more conventional counterparts, but they’re part of that excitement and variety that we offer.”

As consumers seek out bolder flavors, manufacturers are “adding more zing” to nuts, says Tom Vierhile, VP of strategic insights, North America, for Innova. He’s also seeing functionality being added to nuts through ingredients such as hemp and turmeric. 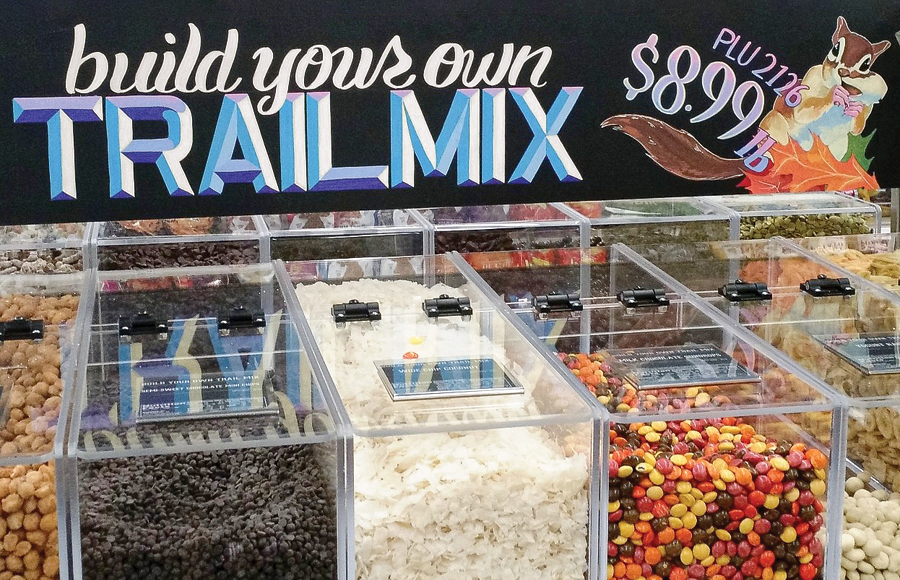 When companies offer creativity and sophisticated products, “they’re trying to move out of the commodity space and snare a consumer with something a little different. Snack nuts have been locked in a commodity dungeon for a while,” Vierhile says.

And for both nuts and dried fruits, he says clean-label claims are important, no matter what’s added to them.

Purdy has also seen sales of these products pick up “significantly” at the front end since Food City made changes last year to offer more better-for-you snacks. “It’s impulse and transitioning from more traditional snacking to more nuts and dried fruits,” he says, though sales of candy bars are up too. A limited variety of nuts and dried fruits can also be found in the produce aisle in clamshells. These do very well because of the fresh halo and are intended here “more for healthy eating and baking,” Purdy says.

Because of how well these products are doing, Food City recently introduced a brand offering that’s carrying much of the growth in nuts and trail mix, Purdy says. Terry’s Best is a legacy brand that originated in the local market as a salty snack that’s transitioned into a more premium private label brand of nuts and trail mix.

Overall, Purdy says, best-sellers in dried fruits and nuts are traditional snacking nuts (Virginia peanuts and mixed nuts) and raisins and cranberries, “but people are experimenting with flavors. We have a salt and pepper line in our nuts, and we developed a line playing off the Smoky Mountain BBQ flavor in our potato chips.”

A natural product line extension for Gourmet Nut was Power Up trail mixes, which make up 90% of the company’s revenue.

“Trail mix is popular,” says Dennis Peters, director of marketing for Gourmet Nut. “Kids like to eat with their fingers, and when you can pick through trail mix and eat what you want, it’s interactive food.” Gourmet Nut’s products also have a clear window so consumers can see what’s inside.

The company’s 14-ounce bags of nuts and trail mix drive sales, but its 2.25-ounce snack bags are also doing well, especially at club stores. “That business is accelerating faster than our big-bag business but because it’s coming out of a smaller base,” Peters says.

“Nuts will continue to be a large category for retailers as people are eating healthier and snacking more,” says Wilson of Harmons. “I think a lot of people would rather snack healthy.”