At select QFC stores in the Seattle area, the longest journey some packages of leafy greens make from farm to the fork might be the length of a checkout belt.

Lettuce, herbs and other microgreens in the Kroger Co.-owned stores aren’t shipped to the store necessarily but are in fact born, raised and harvested in glass tanks illuminated by a purplish light, right there on produce floor. The growing environment is controlled remotely, and products at maturity—about every three weeks—are harvested, packaged for retail and scooted a few feet over to a case from which they are displayed and sold.

The groundbreaking produce displays—which technically don’t break ground as plants grow on stacked trays—represent one vision of high-tech sustainability with a dash of merchandising wizardry from Berlin-based InFarm, which made its U.S. debut in 15 QFC stores about a year ago.

But similar new ideas are growing wild in the leafy green space, where dozens of new brands are now touting products grown in innovative controlled environments closer to end users that they say are more flavorful, nutritious and environmentally safer than traditionally sourced counterparts that likely have traveled hundreds of miles just to get to stores using a supply chain and farming practices that are doomed over the long term and proven especially vulnerable to contamination and foodborne illnesses.

Consumers in the meantime are eating it up.

“Right now, every major retailer in the U.S. has a local indoor salad program, or is working on one to have it in place right away,” says Paul Lightfoot, founder and president of BrightFarms, the Irvington, N.Y.-based indoor grower that supplies a variety of retail customers. “Some retailers are stocking multiple brands.”

Lightfoot is something of a pioneer in the industry, having established BrightFarms more than a decade ago behind the notion of safer produce grown close to its distribution points—chain retailers with dense regional footprints such as Kroger, Walmart, Stop & Shop and Food Lion are now served by BrightFarms’ five facilities. He confesses the idea was considered something of a “moonshot” back then, but says numerous food crises linked to E. coli in traditionally sourced greens—including a massive spinach recall in 2006 and a more recent outbreak affecting farm-grown romaine lettuce—helped retailers to discover locally farmed alternatives when their rest of the bagged-salads sets cleared out in recalls. Environmentally minded, tech-focused entrepreneurs and the venture capitalists supporting them took similar notice.

“You’ve seen an enormous amount of capital flow into the space over the last five years—particularly in the last two or three,” Lightfoot says. “But it’s not the amount of capital flowing in or even the rise in the number of competitors that are the story. The story is that today, there’s no longer a question about retailers that want—or are demanding—indoor-grown salads. It’s not a future-forecast thing. It’s right now.”

As BrightFarms grew, Lightfoot and counterparts in the burgeoning indoor farming industry, including companies such as AeroFarms, Little Leaf Farms, Vertical Fields, Bowery Farming, Plenty, Revol Greens and Superior Farms, co-founded an association to support their members and growth. Lightfoot was selected to a role on the U.S. Department of Agriculture’s fruit and vegetable industry advisory committee, ascending to its presidency in January of this year.

These young brands may duel on the shelves of stores in some communities, and many ultimately may have eyes on the same markets and shoppers, but not unlike counterparts in fragmented and variety heavy niches like microbreweries, the players vary by region and together feel they have a common opponent in the much larger conventional supply chain whose share they are ultimately after. In the case of U.S. leafy greens, these are those sourced mainly from conventional farms around Yuma, Ariz., and Salinas, Calif., (in conversation, these brands use “Salinas” as a kind of catch-all phrase to describe conventional West Coast farms).

And “Salinas” for its part has, since the 2006 spinach recall, established its own member association dedicated to safer handling practices, known as the California Leafy Green Products Handler Marketing Agreement, and late last year launched a new website to tell its story to consumers and food writers.

Our rate of growth has been fantastic. But the runway ahead of us is much bigger.”

Lightfoot estimates indoor growers collectively control only a sliver of the market for U.S. leafy greens—about $100 million of a “several-billion-dollar” market. “Our rate of growth has been fantastic,” he says. “But the runway ahead of us is much bigger.”

That—along with advances in technology and a growing environmental awareness—is raising hundreds of millions in venture capital to fund such young companies. BrightFarms, for example, late last year secured more than $100 million in debt and new equity capital to support robust expansion plans, led by Cox Enterprises, which now owns a majority stake in the company, and includes a follow-on investment from growth equity firm Catalyst Investors.

Plenty Farms, San Francisco, gathered in $140 million at around the same time. Plenty grows four products now and is in the midst of expanding to 430 Albertsons Cos.-owned stores in California. It is building a second facility in Compton, Calif., to support them.

Plenty’s indoor vertical farms grow lettuce along walls in an indoor environment uses cutting-edge technology that leverages data to manage optimal growing conditions—or what the company’s co-founder and Chief Science Officer Nate Storey calls a “radically different architecture” he describes as a platform from which Plenty can do its part to feed a world where traditional farming methods are quickly being overtaken by the challenge of a growing world population.

A premium take on commodity lettuce, Storey insists, Plenty is not.

“People don’t understand that we are out of space; we’re out of water. We are out of the natural resources necessary to expand global food production for fresh fruits and vegetables,” he says in an interview. “We are building new lands. These farms represent new farmland—perfect farmland—with perfect growing conditions. And we can put this farmland anywhere in the world now. And I think that’s an important thing for folks to understand. This is not greens for wealthy people and wealthy communities. This is solving a global food problem that is finite land and growing population.”

This field has always been plagued by this race to the bottom. ... Our goal is to say, ‘Hey, consumers want something better, and not the cheapest thing on the shelf.’

In retail, Plenty’s packaged products—arugula, kale, spinach and a mizuna mix—are priced for “middle of the pack organic,” Storey says.

“We have experienced some pressure from our retailers to raise the price because the response is quite positive from consumers, but we’re going to try and keep our pricing at kind of that median organic range,” Storey says. “We’re targeting a range that we think is quite fair for our product, gives us also a pretty awesome margin to work with, and it gives our retailers an awesome margin to work with. It’s a win-win.

“This field has always been plagued by this race to the bottom, where people focus more on price than anything else,” he continues. “And we’ve seen the last several decades depress the cost of food, and depress the pricing that that farmers can get. Our goal is to say, ‘Hey, consumers want something better, and not the cheapest thing on the shelf.’” 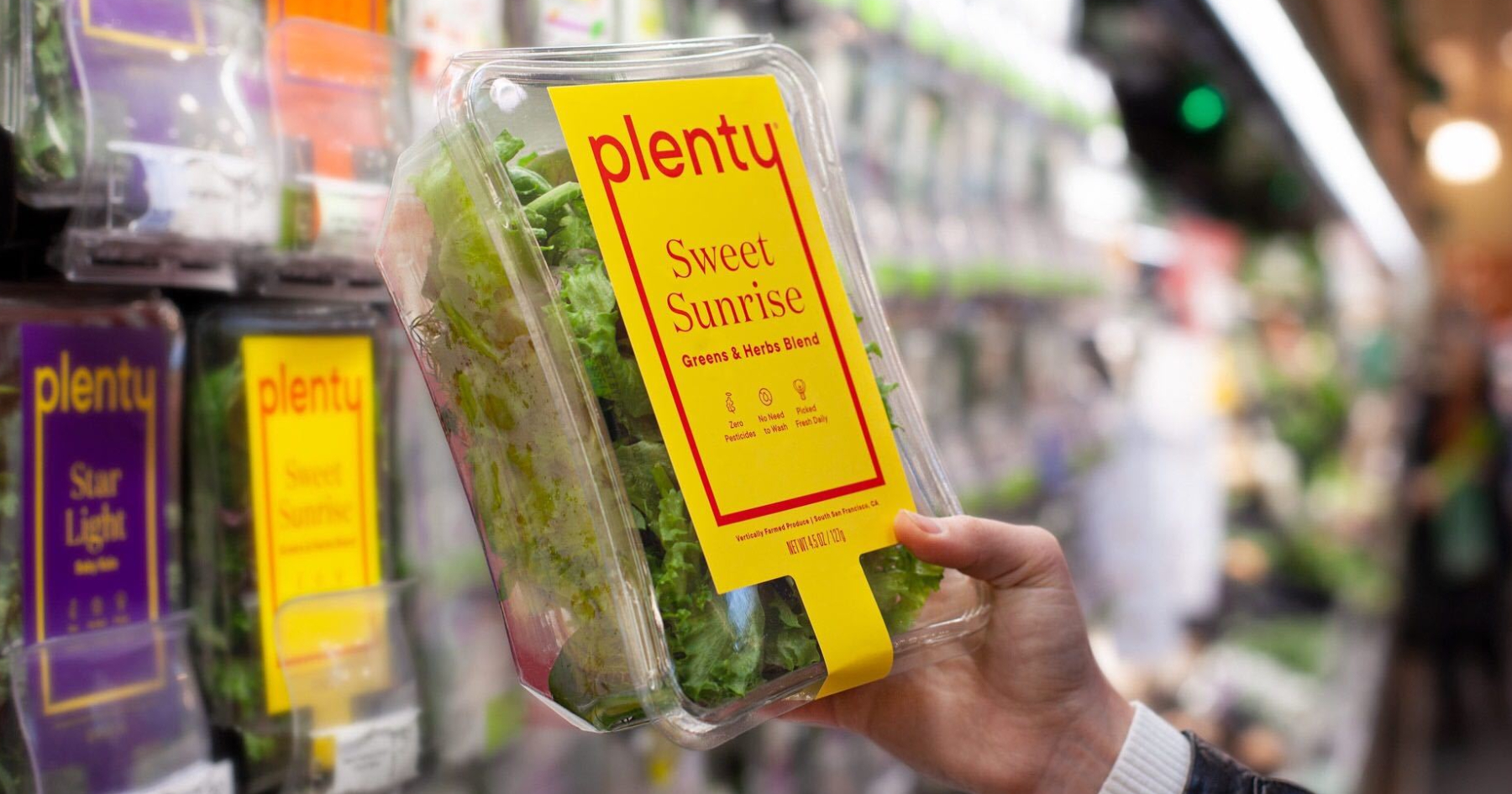 Consumers, he adds, may be tempted to pay more when they understand the safety and nutrition benefits of indoor-grown produce, but ultimately believes taste and a consistent experience will win in the long term. “We really want to understand consumers, and what they want. And one of the things we ended up centering on was flavor. Can you snack on these greens?” Storey says.

Lightfoot of BrightFarms predicts the gap between indoor- and outdoor-grown products will narrow as indoor farmers improve their scale and efficiency and conventional growers increasingly feel the pinch of rising labor and resource and costs.

“Their input costs, particularly of labor and transportation, have been rising sharply over the last few years. And their input costs of water are about to start rising sharply. … So I think you’re going to see more shortages and less availability from Salinas, which I think is going to make them less competitive. Although we have a small price premium that we have to command, we see it shrinking over time.”

As demonstrated by companies such as InFarm that deliver a powerful message of locally grown food directly in sight of shoppers, merchandising can play a critical role in telling the story and sparking trial and sales, sources say.

“Living plants grown in-store provide more nutritious, tastier and fresher food for everyone,” says Emmanuel Evita, Infarm’s global head of communications. “By distributing farms throughout a city, rather than transporting food hundreds or thousands of miles, we’re bringing produce to customers that’s so fresh it is still living right at the point-of-sale. Fifty percent of nutrients can be lost within 24 hours of harvest. We’re also able to introduce plants that were previously unavailable to stores because they were too delicate to be transported through the traditional supply chain.” 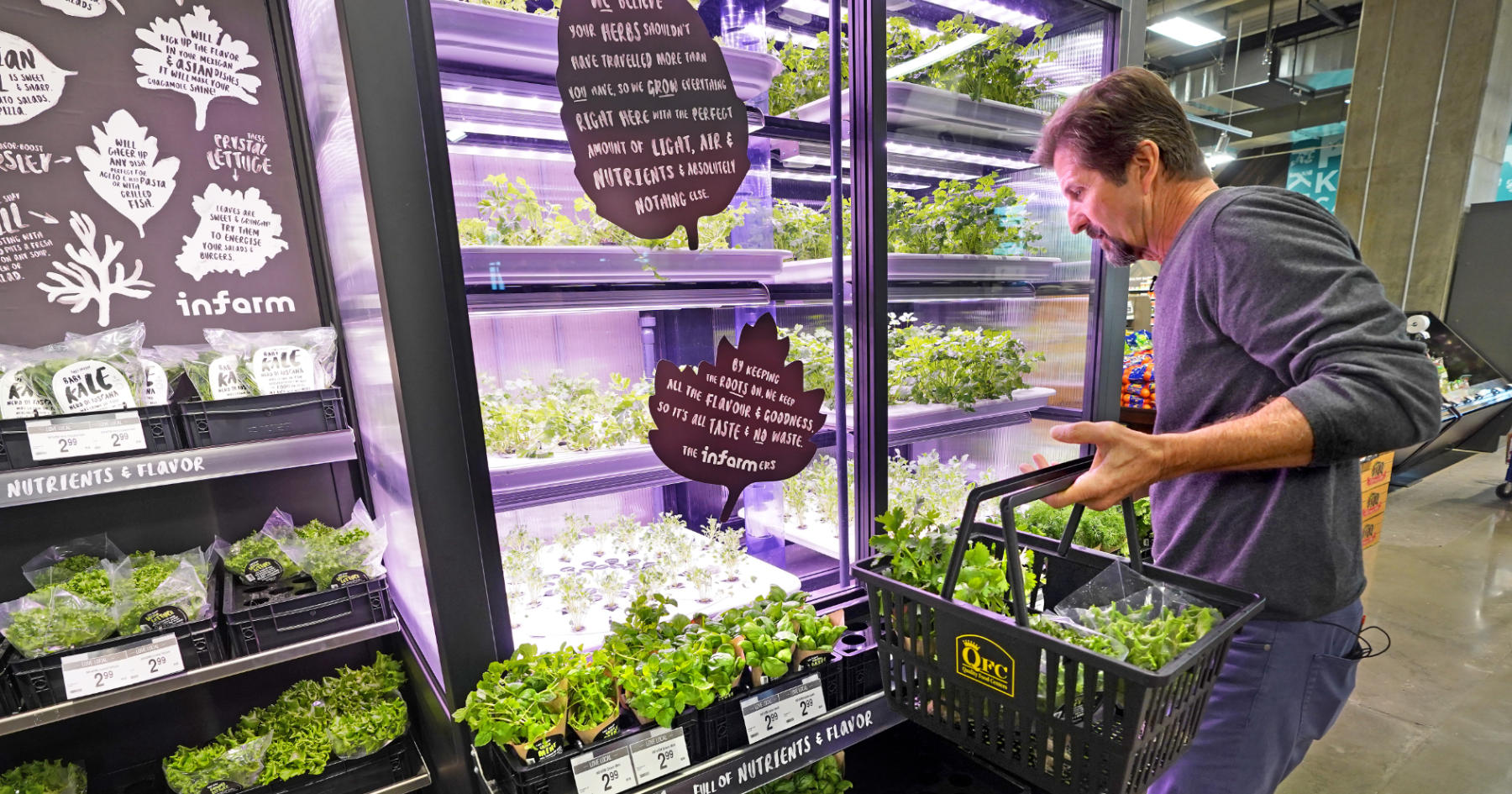 Lightfoot says the difference between stores that sell a lot of his product vs. those that could do better lie in “the nuts and bolts of merchandising.”

Good execution, he says, is “not sexy, but it’s core to what we are. We deliver to the distribution centers of our retailers in our own trucks. We have our own merchandising staff going out and helping to manage the way it’s presented. And we think that’s critically important especially in a perishable category like this.”

Indoor produce can trace origins to Europe and crops like tomatoes grown in the Netherlands. Leafy greens are getting particular attention in the U.S. due to their lengthy routes to market and limited shelf life. “With rice, or apples, that’s not that case, as those products can store cheaply and travel cheaply,” Lightfoot says.

But indoor-grown won’t be limited to lettuce and herbs, says Storey. Plenty, for example, has signed a research and development agreement with the fruit grower Driscoll’s. “I think you’ll be surprised at the speed with which strawberries come to market from indoor farms. We've been breeding tomatoes and working on other crops at Plenty as well,” he says. “The way to view leafy greens is it is the gateway. It is the beginning. It is the first stepping-stone on a very long path that leads to many of the crops that have historically been grown in the field coming indoors, because at the end of the day, it’s going to be very hard to beat the economics and the quality of the products that come out of indoors.”