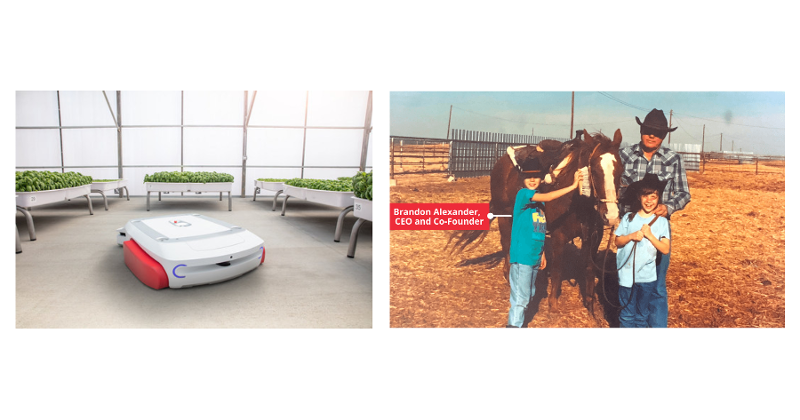 Vertical farming has attracted a lot of attention—and a lot of investment—as a more-sustainable alternative to traditional field farms.

But it's not a perfect solution—at least, not as many vertical farms currently operate, says Brandon Alexander, co-founder and CEO of Iron Ox, a San Carlos, Calif.-based hydroponic farming and ag-tech company. Take, for example, vertical farms' extensive use of grow lights: "Now we’ve replaced one of our best renewable resources, the sun, with LEDs," says Alexander, who spent summers in his childhood on his grandparents' Texas field farm. "It’s like we took the most natural part of growing and made it artificial, and so now you get energy waste with everything that you grow."

Alexander was working in robotics as a software engineer at Google in 2015 when, as he wrote on Iron Ox's website, he found that he "couldn’t shake the feeling that there was an opportunity to have an even bigger impact."

A road trip with fellow Iron Ox co-founder Jon Binney to identify places where more-advanced automation could help American farms and farmers was "depressing," he wrote, but also illuminating: Incorporating more robotics into small farm tasks wasn't going to cut it. "We were going to have to rebuild the whole damn system with automation and efficiency baked into every bit of it," he said.

Fast-forward to 2021, and what that looks like for Iron Ox now are automation-heavy indoor farms in Northern California that realize water savings of 90%—similar to savings achieved by vertical farms—vs. traditional field farms and that skip LEDs in favor of sunlight. The company's leafy greens, herbs and fruits are available at Whole Foods Market, Mollie Stone's and Bianchini Market stores in Northern California, with plans for expanded distribution in 2022.

In April, the company broke ground on a 530,000-square-foot farm outside Austin in Lockhart, Texas, and this fall Iron Ox announced a $53 million Series C funding round led by new investor Breakthrough Energy Ventures, an investment group founded by Bill Gates. Earlier this month, the company introduced Grover, a "mobile support robot" (AKA a growing rover) that assists in monitoring, watering and harvesting crops ranging from leafy greens to strawberries.

Alexander spoke with Winsight Grocery Business recently about why indoor farming needs its own disruption and what farming's future should look like.

Alexander: Grover handles the hydroponics in our farming operation. When we started out, while we liked hydroponics, because you can grow year-round, and you can grow near cities and near people, most of the indoor farms and vertical farms we saw I would describe as very rigid. This would be a beefsteak tomato indoor farm; this would be a butter lettuce indoor farm. But you’re building these indoor farms for 15, 20 years—I mean, the iPhone hadn’t even come out 15 years ago (it debuted in 2007). How do you know what that demand is going to be even next year, let alone 10 or 15 years later?

And so we realized if we’re really going to make a solution that can meet consumers’ needs, we need to make a system that’s a lot more flexible. And so we made these little hydroponic pallets, these little 6’ x 6’ grow modules, and each one can be configured to different plants—this could be a tomato; this could be a butterhead lettuce or a strawberry. But a strawberry plant has different needs than a butterhead lettuce plant, so we need a system that can react to each of those plants’ needs.

That’s where Grover came in. We developed Grover to be able to really service each one of these grow modules and give these plants a little tune-up throughout their life cycle.

Iron Ox mentions that Grover was designed to be responsive to things like retailers' changing needs—to shift gears in growing and harvesting when, for example, there's a spike in shopper demand for a specific piece of produce. What benefits do you get from a more modular, more-agile approach to growing?

The big thing we solve is that with most farming operations, including indoor, you’re doing something this way, and that’s how you’re going to do it for always.

We designed this system to always be learning about the crop’s needs. That’s where we have our AI, where we use our 3-D camera and take imagery of everything we do. We also have our own custom hydroponics to make sure we give [the crop] exactly what it needs and nothing it doesn’t. You end up getting not just a tastier product and a more-nutritious product, but you also get it more consistently every week.

It seems like in a rush to do what’s known and what else is already being used in the burgeoning indoor-farming market, there’s a risk of defaulting to a “That’s just how it’s done” mindset—which you’ve talked about as a challenge in traditional agriculture. Why does a relative newcomer like indoor farming need disruption, too?

To me, the big issue is I don’t think most people realize just the impact on climate change that food growing and food production is having. In the field farms, you’re tilling land, you’re pumping nitrogen, which creates nitrous oxide (a greenhouse gas), and then you’re traveling 2,000 miles on average to get from the farm to the grocery store.

But in some ways, it’s even worse for vertical farming, where now we’ve replaced one of our best renewable resources, the sun, with LEDs. It’s like we took the most natural part of growing and made it artificial, and so now we get energy waste with everything that you grow. Neither of these felt tenable for our future. If we’re going to take the second-largest contributor to global warming, we’ve got to make some major changes to it.

We need [things like] electric cars; that’s going to be the future. But that’s why I think we need to have the exact same type of thinking around farming, around food production. I kind of think of food as where electric vehicles were 10 years ago.

How did you first connect with retailers like Whole Foods and Mollie Stone’s and sell them on next-generation hydroponic farming?

We connected with them with our first greenhouse up in Gilroy, just outside of the Bay Area. When we told them our story, what we’re up to and why we’re doing it—they’ve obviously seen quite a bit of indoor farming before. But what they appreciated was that we took a fundamentally different approach. As farming has become more industrialized, and that’s indoor and outdoor, we basically have sacrificed quality for quantity. The whole goal is to reverse that. We can have these batch-sized plants, give them exactly what they need, but scale it with technologies like Grover and AI.

What do you hope people will take away about why this is where farming needs to go, and why it needs to go there now?

The urgency is real. Central Valley, a big part of our produce today in California, is literally sinking from just using up the water—we’re having to dig deeper and deeper wells. If you talk to your average farmer in the Salad Bowl of the U.S., they know things cannot sustain.

And [with respect to vertical farming], you can’t just change water waste with energy waste; you really have to think about the whole system of growing from the ground up. We can’t just come up with Band-Aid solutions anymore. Food is the one thing that impacts ideally every single person every single day, and we have an opportunity with food that you don’t have with any other industry to truly make it not just sustainable but, I believe, carbon-negative over time.