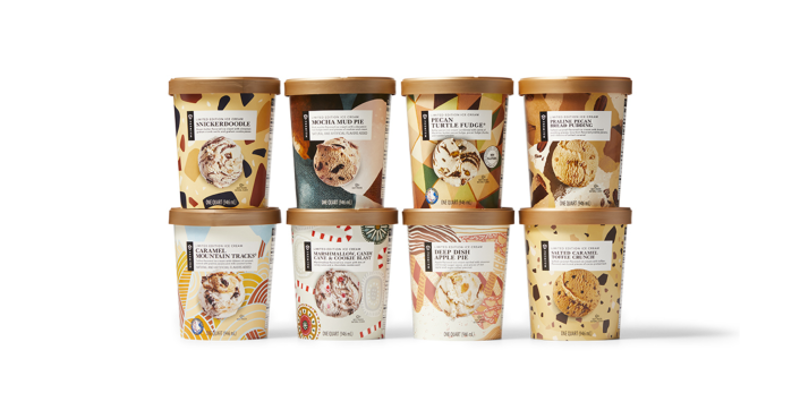 For those ready to ditch the pumpkin spice for peppermint and gingerbread, grocers and creameries across the country are eager to embrace shoppers' holiday flavor cravings in indulgent new ice creams and frozen desserts.

Walmart stores in Michigan are the exclusive place to find new Little Debbie Christmas Tree Cakes icecream, produced by Holland, Mich.-based Hudsonville Ice Cream. The pints, which retail for $2.50, have a base of white-cake-flavored ice cream and feature pound-cake pieces, green sprinkles and red-frosting swirls in a nod to Little Debbie's seasonal snack cakes. Hudsonville's peppermint-stick ice cream is returning to Meijer and Kroger grocery stores in Michigan.

Perry's Ice Cream, which debuted Doughing, Doughing, Gone! in partnership with MLB's Cleveland Indians in Giant Eagle stores this spring, announced the return of Friendsgiving ice cream at retailers including Tops and Save A Lot stores near the company's Akron, N.Y., hometown. The limited-edition offering, inspired by thumbprint cookies, features almond ice cream, blackberry swirls and sugar-cookie-flavored cookie-dough pieces. Also, after a five-year hiatus, the coconut-rum-flavored Zero Visibility is back for the holiday 2021 season.

For those whose treat tastes run not as cold, Trader Joe's recently introduced Cranberry Orange Bars, available in the frozen case and featuring a shortbread crust topped with cranberry-orange purée. The precut, kosher bars are sold 12 to a box for $4.99 and are meant to thaw at room temperature for one hour before serving.

As many consumers get ready for still-smaller-than-pre-COVID holiday gatherings, convenient and seasonally inspired frozen fare, including frozen desserts, can help fill in the blanks for more-intimate holiday meals, 210 Analytics President Anne Marie Roerink suggests. As of September, just more than half (51%) of grocery shoppers surveyed by IRI and 210 Analytics said they expected COVID-19 to have some impact on their holiday plans, and this holiday season is likely to see something of a repeat of 2020's COVID-shifted holiday shopping, with consumers making more grocery purchases online and making fewer but larger grocery trips. That phenomenon, Roerink wrote in September, favors frozen foods—including, maybe, creative seasonal ice cream flavors to share with close friends and family (the ones who don't judge store-bought potluck contributions).