Gut health is everywhere you look, and foods related to it are touted as the cure for everything from depression to arthritis. Sauerkraut, fermented foods, kombucha and even fortified granola bars and cereal are making claims to improve Americans’ digestive health. But the product that remains the strongest for this is also where it all began: yogurt.

That said, yogurt sales are down, by almost 2% over the past four years, according to Nielsen, but nondairy yogurts are picking up the slack, with sales increasing by almost 45% over the same time. Meanwhile, demand for probiotics is up. According to a 2018 survey by Jacksonville, Fla.-based Acosta, the number of shoppers indicating that they’d purchased a food or beverage with probiotics grew from 27% to 35%.

Probiotics—microorganisms that live in the human digestive tract, or gut—have evolved into a huge industry. Grand View Research of San Francisco predicts the overall global probiotic category will grow at a compound annual growth rate of 6.9% for the next five years. Chicago-based market research firm IRI breaks it down further. In its October 2019 Dairy Digestive Health Trends report, IRI found yogurt constitutes the majority of probiotic sales, with an 85% dollar share of the total dairy probiotic and prebiotic category, while the total dairy probiotic and prebiotic category saw 4.8% sales growth in the year ending in October. 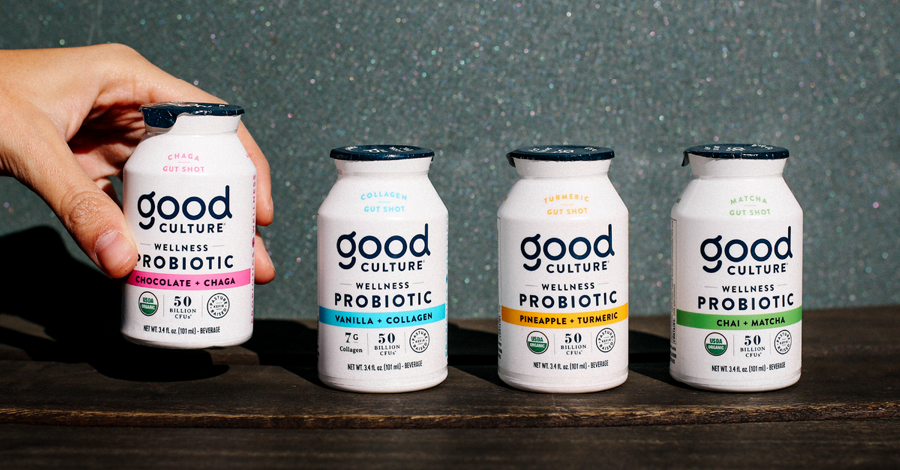 At Weis Markets, which has 200 stores in Mid-Atlantic states and is based in Sunbury, Pa., sales of products containing probiotics are strongest in the yogurt case, with yogurt and kefir. “That’s where consumers naturally feel they are vs. shelf-stable products,” says Beth Stark, manager of nutrition and lifestyle initiatives. She tends to direct customers seeking probiotics to this section because these probiotics are naturally occurring and “the most trustworthy.” Fortified products, which are not regulated, she says, “might be making some very boastful claims.”

To make it easy to navigate, the yogurt cooler is merchandised by brand and, within that, similar types are together, such as kefir and unsweetened. Stark says this is helpful because it can be an overwhelming category. And if probiotics are called out on packaging, even better. “There’s a sea of options, so if someone has it called out, it can make a difference,” she says.

Weis also carries refrigerated probiotic bars from The Cultured Snacking Co., which is owned by Danone, and probiotic cottage cheese—both of which are seeing strong sales, Stark says. They’re a better option, she points out, than a shelf-stable bar because they’re made with live cultures.

At Coborn’s stores, more consumers are looking for products that aid in digestion, and common complaints include irregularity and stomach pains, says Emily Parent, registered dietitian for the St. Cloud, Minn.-based company. She finds that while they’re familiar with yogurt and supplements for probiotics, “when we’re discussing foods that contain probiotics, our guests are more interested in including foods they may already be eating, such as yogurt, kefir, kimchi, sauerkraut and kombucha.”

At Lakeland, Fla.-based Publix, yogurt is the go-to product for probiotics, though “we’ve seen a proliferation of probiotics beyond yogurt,” says spokesperson Maria Brous. “Probiotics can be found in cottage cheese, refrigerated bars and granola bars in center store.”

While consumer awareness of probiotics increases, “yogurt, and more specifically Activia in multipacks, continues to meet the daily regime need,” she says. Publix does not yet carry plant-based yogurt alternatives and hasn’t had any requests for them, though it does carry GoodBelly’s probiotic juice, “which meets an on-the-go need but also fills a nondairy role,” Brous says.

Raley’s Family of Fine Stores, which is based in Sacramento, Calif., and has almost 130 locations, offers an assortment of refrigerated products known to be rich in probiotics, such as sauerkraut, dairy and nondairy kefir, kombucha, yogurt, miso, tempeh and kimchi. The chain is preparing to launch a private label kombucha soon.

“The popularity of refrigerated probiotics is definitely on the rise, and we expect that to continue for the next few years,” says Yvette Waters, nutrition strategist and brand influencer for the regional retailer.

One brand that’s seeing continued success with refrigerated probiotic products is Good Culture, which offers cottage cheese and sour cream with probiotics. Last November, it released kefir-based 3.4-ounce Wellness Probiotic Gut Shots in four flavors. “Probiotic shots are an emerging category, and we saw a void in the space with an opportunity to merge functional ingredients with probiotics,” says Jesse Merrill, co-founder and CEO of the Irvine, Calif.-based company. “We wanted to offer an easy, on-the-go way to get your daily dose of gut-friendly probiotics.”

Sales of dairy-free yogurt-type products are growing, and though the probiotics in them are not usually naturally occurring, they tend to be able to sit under yogurt’s halo—even if they’re less nutritious overall—because they’re merchandised within the yogurt case, says Stark of Weis Markets. These products are almond-, coconut-, soy- and even cashew-based.

At Raley’s, plant-based yogurts are doing well, Waters says, though she feels companies may need to provide more transparency around the probiotics they’re using in order to keep the excitement rolling. “There is some confusion in the market due to the sheer number of probiotics that are available and about exactly which ones are being used,” she says.

Plant-based diets may be the boutique trend of 2020, but they’re not necessarily going to stick around, says Melissa Abbott, vice president of retainer services and culinary insights for The Hartman Group, Bellevue, Wash. “We’re going to see a proliferation of dairy and nondairy products,” Abbott says, but she advises to “approach plant-based with caution, because their long ingredient lists often contain items that are far from healthy.”

And like Stark, Abbott sees dairy-free products benefiting from their proximity to yogurt. “Anything with probiotics is more believable, provided it’s in some kind of refrigerated case,” Abbott says, adding that smoothies fall into this category for the same reason.

Most refrigerated products containing probiotics have this health halo, and that’s what will keep momentum going for probiotics, says Bob DiNunzio, director of business development for Daymon Worldwide, a private label-focused company based in Stamford, Conn. However, DiNunzio believes plant-based yogurts will continue to draw consumers because of that halo. “Do consumers want short labels? Yes. But I think probiotics has overcome that hump and people are more inclined to accept them as part of their diet. Folks will take it and see how it works for them,” he says.

Not all plant-based yogurts are rated low for nutrition by dietitians. Dairy-free yogurts from Forager Project and Kite Hill are fermented traditionally, meaning their cultures are live rather than added at a later date. And yogurt isn’t the only product for consumers seeking plant-based “dairy” probiotics: There are also smoothies and cottage cheese from Hiland Dairy; French-style nut cheese from Treeline; quark from Elli; ice cream from Culture Republick; and yogurt dips from Sosi’s.

“The innovation is there,” says DiNunzio. “People think of probiotics as healthy, and people more than ever are reading labels and want to know what they’re putting on their body. I believe probiotics are here to stay.”