Authenticity: For a growing number of consumers, it is the most important ingredient in the food they eat. As such, cheeses with special designations, indigenous attributes and compelling origin stories are increasingly taking center stage at retail.

From Cincinnati-based Kroger Co.’s ever-expanding Murray’s Cheese counters to small cheesemonger-owned and -operated shops such as the Fairfield Cheese Co., with two locations in Connecticut, retailers are selling more cheese by educating shoppers about the stories behind them.

“We tell the story every time a customer tastes a cheese with us,” says Laura Downey, American Cheese Society, Certified Cheese Professional (ACS CCP), and co-owner of Fairfield Cheese. “We spend a lot of time educating our customers and building loyalty.”

Fairfield Cheese focuses on small-batch, artisan and farmstead cheeses, and offers 65 to 85 examples from five or six countries. “Even our European classics are made on a smaller scale,” says Downey, who points to the shop’s farmstead rather than factory-made manchego. “We have a clear mission to sell the most authentic cheeses we can source. Customers come to us because they know we have curated [the case] for them.” 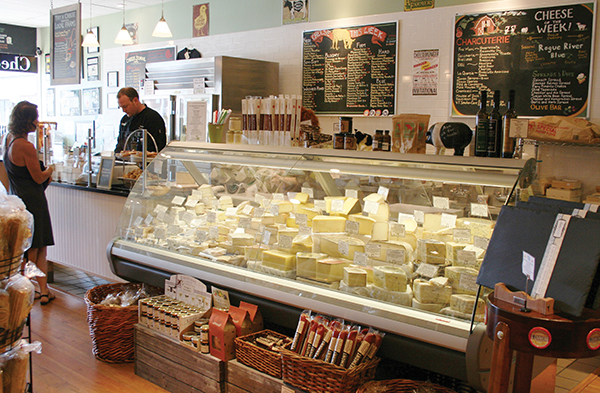 With cheeses protected under European Union law through Protected Designation of Origin (PDO) or Protected Geographical Indication (PGI), the label ensures quality, but do shoppers know the whole story?

For Downey and Fairfield Cheese co-owner Chris Palumbo (ACS CCP), who frequently talks to customers about their top-selling PDO cheeses, including manchego, Stilton, Gorgonzola, Comte, Gruyere and Parmigiano-Reggiano, sharing the story of these authentic examples is critical to success.

“We teach them the difference,” Downey says. “Many of our customers are well-traveled so they have had the real deal in Europe, and they want that here too.” One way that Fairfield Cheese educates its customers is with its highly successful cheese wheel unveilings. “We have invited customers to come watch us open big wheels of cheese like Parmigiano-Reggiano. When we do this, they get to hear all about the cheese and taste it. I think they love knowing what they are buying is authentic and delicious.”

Ian Schuman of Schuman Cheese, a fourth-generation Italian cheese company based in Fairfield, N.J., has witnessed the selling power of a PDO mark when retailers educate shoppers about its meaning. Founded in 1945 as an importing business, today the family-owned Schuman Cheese is also a cheese manufacturer, processor and the largest importer of Parmigiano-Reggiano in the country.

“Retailers really made a commitment to Parmigiano-Reggiano, and consumers understand this upscale wedge. They know it’s a high-end cheese from the designation it carries,” Schuman says.

According to the Parmigiano-Reggiano Cheese Consortium, the U.S. is the No. 1 market for imports of the “king of cheeses,” receiving more than 10,000 tons, amounting to 250,000 wheels, and worth approximately $130 million in 2017.

According to Schuman Cheese, which imports nearly 20 cheeses with special designations, sales of Pecorino Romano and feta are also on the rise. As the exclusive U.S. importer of Dodoni Greek PDO Feta Cheese—the world’s largest feta producer—Schuman is working to spread the story of this unique cheese.

Dodoni uses top-quality milk from sheep and goats in the Epirus region of Greece, a mountainous, wet region where the land inhibits large-scale farming. “They collect milk from more than 5,000 farmers with five to eight goats each,” Schuman says. “It’s an artisanal product on an industrial scale. Cheeses like this are centerpieces of a culture.”

It’s compelling history that resonates with consumers. “People today are looking for an authentic story,” Schuman says. “They love the origin story. Those are all there with designated cheeses.”

Wisconsin and California, the nation’s two largest cheese-producing states, have seals and certifications for certain cheeses. But without a designation of origin seal for most American-made cheese, how do specialty cheese producers and the retailers who sell their creations best communicate the tradition, quality and story behind these culinary gems?

“While Vermont cheeses, like our Shelburne Farms Cheddar, don’t have protected designation of origin status, Vermont has a very strong brand identity that we defend rigorously,” says Tom Perry, cheese sales manager for Shelburne Farms in Shelburne, Vt. “It is associated with quality, and with traditional, artisan production. We communicate these ‘Vermont-made’ qualities one on one with distribution partners, cheesemongers and the public.

“When a cheesemonger is not personally advocating for us, our label becomes very important,” Perry continues. “It conveys our cheddar’s attributes, like non-GMO verification and being a humane-certified dairy.”

Shelburne is a farmstead cheddar producer, making its cheese only from its own herd of Brown Swiss cows, an attribute that resonates with consumers, as does its status as a nonprofit organization committed to education and sustainability.

While the Vermont Cheese Council, the California Milk Marketing Board and the Dairy Farmers of Wisconsin—the latter of which recently changed its name from the now-defunct Wisconsin Milk Marketing Board, to reflect its new strategic mission, vision and identity that more firmly aligns with the efforts of Wisconsin’s dairy farmers to expand growth opportunities domestically and globally—all produce cheese trail maps, promoting cheeses from states such as Virginia, where there’s little cheesemaking tradition, can be more challenging.

“We have a very different situation than European producers, or even producers in relatively homogenous states like Vermont and Wisconsin, where there are regions with many cheesemakers making the same style of cheese in close proximity,” says Kat Feete of Meadow Creek Dairy in Galax, Va.

A family farm in the Appalachian Mountains, Meadow Creek makes farmstead cheeses and practices sustainable farming methods, managing the land and their Jersey cattle for health rather than high production.

“The South does not have a strong cheesemaking tradition, so it has been challenging developing sales and support,” Feete says. “We have participated in several ‘Southern Cheeses’ promotions with our vendors, and we do see awareness of the South as a cheese-producing area expanding.”

Meadow Creek also uses social media and its website to communicate the unique attributes of its cheese, but it finds the best storytelling happens at the store level.

“Our retailers are the key to our success and getting our message to the cheese public,” says Feete, who says the family does presentations and in-store tastings, invites cheesemongers to the farm, and dispatches a weekly email to retailers with stories about the farm and cheese plant. 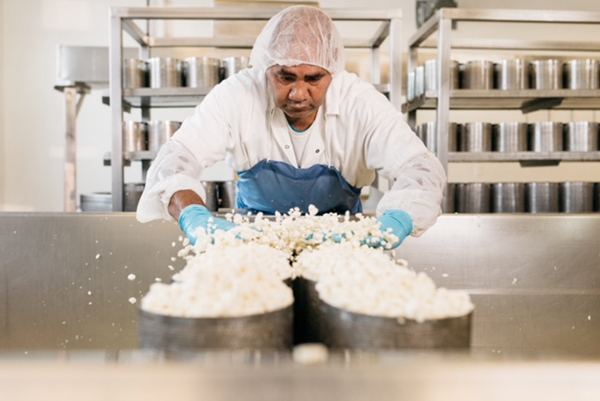 Dedicated to impacting the world for the better, one wheel of cheese at a time, Rogue Creamery in Central Point, Ore., has earned a number of certifications that are meaningful to customers. “Cheese producers express the care and quality of their products transparently, with verification through certifiers like Oregon Tilth, B-lab and others,” says Rogue Creamery President David Gremmels. “And regional and distinctive brands that provide a sense of place and personality enhance this; they contribute to the story behind the cheese and region where it is created.”

B Corps are for-profit companies certified by the nonprofit B Lab to meet rigorous standards of social and environmental performance, accountability and transparency.

While Gremmels finds that taste and convenience are the key factors influencing purchase decisions, touting “award-winning” also makes an impression. “The average consumer may not be familiar with the World Cheese Awards, the American Cheese Society or others, but seeing that a cheese won ‘Best in the World’ or ‘Best of Show’ helps consumers make a decision about its quality, and ultimately whether or not to purchase it,” he says.

Iselin, N.J.-based Jana Foods last month debuted Organic Kingdom, a new line of USDA certified organic British cheddar handcrafted and sourced from the birthplace of cheddar in Somerset in the U.K. “It is the only USDA-certified organic British cheese available in the U.S.,” says Jennifer Larsen, marketing manager for Jana Foods. “The organic milk is sourced from cows that are free to roam and graze on lush pastures in the heart of the Cheddar region of England,” which Larsen says is what gives the line of four varieties its “distinct and deliciously bold taste.”

As the second-largest cheese-producing state in the nation, California is home to a rich cheesemaking tradition. The California Milk Advisory Board (CMAB) promotes this tradition of quality with its Real California Milk seal.

“Origin is a key consideration for consumers,” says Jennifer Giambroni of CMAB. “Awareness of and purchase intent for products with the Real California Milk seal is at an all-time high.”

CMAB, which introduced the seal in late 2007, has invested millions of dollars in creating an identity for cheeses that carry the seal, and before it the Real California Cheese seal, so consumers know the product is made from 100% California milk from farm families.

“Retailers are an essential partner in telling the story behind the cheeses they carry, and consumers are interested,” Giambroni says. “Thoughtful point-of-sale, labels and sections that call out origin of products can be helpful in sharing that message.”

This fall, grocers will have the opportunity to promote a variety of California cheeses with CMAB’s “Real Food, Real Snacks” back to school campaign. Currently in development, the promotion will focus on the “snackification” of dairy products, including better for you snacking options like cheese, Giambroni says.

“Knowledgeable and passionate cheesemongers can sell a lot of cheese,” says Laura Downey of Fairfield Cheese, who believes the best way to promote cheese is with the help of an enthusiastic, knowledgeable staff.

“Training is very important, though without a passion for cheese or good food it is hard to be a great cheesemonger,” she says. “Our best cheesemongers share an obsession for great food and cheese, and they all love to cook their own food.”

Fairfield Cheese trains its staff for customer service first, and then techniques such as the proper way to care for cheese, and how to wrap and cut it.

“We teach them how to ask the right questions to help a customer get a cheese they will love,” Downey says. “We also provide opportunities to visit producers and go to in-depth classes, and we often have producers or importers come in and do staff training with us.”

One way to share the love of a great cheese is by educating customers about a different PDO cheese each month. Take a cheese such as Le Gruyere AOP Switzerland. The average customer probably doesn’t know that the recipe for this cheese hasn’t changed in more than 900 years, and that as a PDO product, it can be produced in only five cantons in western Switzerland.

“The same techniques, and the know-how of the milk producers, cheesemakers and affineurs is passed down from generation to generation,” says Philippe Bardet, director of Le Gruyere AOP. “There are two PDO products, Gruyere AOP and Gruyere d’Alpage AOP, which is made in the mountains only during summer months. Other than that, varieties are based on aging.”