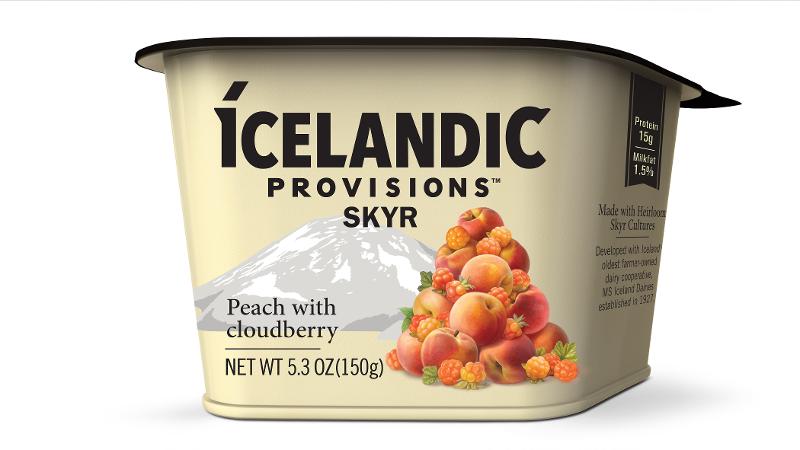 Icelandic Provisions has launched the only line of traditional Icelandic skyr (skee-er) products available in the U.S. The company’s initial rollout includes five flavors: the classic Plain and Vanilla, and three Nordic-derived varieties: Strawberry with Lingonberry, Blueberry with Bilberry and Peach with Cloudberry. Coconut and Raspberry will also be available in stores beginning July.

Icelandic Provisions is made with preserved and treasured heirloom skyr cultures, a proprietary ingredient that is centuries old. Skyr is a nourishing dairy product made with unique cultures to produce its one-of-a-kind creamy texture and complex, mild taste. Icelandic Provisions is protein-rich; each cup contains four times the amount of milk as a cup of yogurt.

Skyr has been Iceland’s signature food for nearly a thousand years dating back to the 9th Century when its believed that Vikings brought skyr on their journeys. Each Icelandic Provisions package features a “fruit cairn” as a nod to its Icelandic heritage. Vikings used traditional cairns, man-made piles of stones, as navigational landmarks. Today, cairns are used throughout the country as trail markers. Iceland’s remote location coupled with its simple, creative food heritage enabled skyr to preserve its distinction as other yogurt products found kinship in foodways across the world. The island’s proprietary cultures and production methods ensure that skyr stands alone.

The company was co-founded with MS Iceland Dairies, the oldest and largest dairy co-op in Iceland, made up of approximately 600 native farms and milk producers. A group of industry veterans were assembled for the U.S. development and management team, including Nico Bevers as President and John Heath as Chief Innovation Officer. The Chairman of the Board is Einar Sigurðsson, who also served as the CEO of MS Iceland Dairies.

"U.S. consumers are developing a palate for the thick, creamy taste of skyr,” says Einar Sigurðsson, chairman. “They value products with a high protein content that aren’t packed with the sugar levels you find in the cultured dairy populating grocery shelves across the U.S. We are proud to launch Icelandic Provisions and expand the skyr category with a product that comes directly from the country that invented it and is made with ingredients that are native to the Nordic region.”

Icelandic Provisions is currently available in the North Atlantic, Northeast and Mid-Atlantic regions within approximately 900 doors of strategic retail partners such as Whole Foods, Wegmans, Harris Teeter and others with plans to expand across the U.S. during the second half of 2016. Each 5.3-ounce cup of Icelandic Provisions retails from $1.79-$1.99.