While local may be the produce aisle’s hottest harvest, for much of the year, it’s imported fresh fruits and vegetables that allow grocers to offer increasingly consistent quality and flavor in the all-important perimeter.

“Most retailers try to provide locally grown products in season—corn, blueberries and tomatoes—but New York and Chicago are not going to get these products year-round,” says Richard Owen, VP of global membership and engagement for the Produce Marketing Association (PMA) in Newark, Del. However, it’s more than the nation’s appetite for an endless summer of fresh produce that’s driving demand for imports.

“The U.S. consumer is getting more adventurous with produce like jackfruit and dragon fruit—things that weren’t in the marketplace before that we can now access almost year-round,” Owen says.

Heightened quality also plays a role. Owen points to South American table grapes as one beneficiary of continued improvements to the cold chain, including constant temperature and humidity, which ultimately deliver a better, more flavorful product with an extended shelf life.

For garden variety fare, such as tomatoes, avocados, peppers, grapes, cucumbers, melons, berries and more, the U.S.’s neighbor to the south and No. 1 free trade-agreement partner plays a leading role.

“Almost half of our vegetables come from Mexico year-round, and at certain times of the year, as much as 75% of our vegetables are coming from Mexico,” says Owen. Canada is the U.S.’s second largest supplier, followed by Chile, the European Union, China, Peru, Costa Rica and Guatemala.

According to Washington, D.C.-based Congressional Research Service, the past decade has witnessed a growing U.S. trade deficit in fresh and processed fruits and vegetables. As a result, the U.S. went from a net exporter of fruits and vegetables in the 1970s to a net importer today.

How to Train Your Dragon Fruit

At New Seasons Market in Portland, Ore., getting shoppers excited about Mexican mangoes, Peruvian grapes and Chilean blueberries means empowering the staff to sell with genuine and informed gusto.

“It all starts with our staff,” says Jeff Salchenberg, assistant produce category manager for New Seasons. “If we can get our staff excited and educated about all the great products that we can get out of season, that excitement is then channeled to our customers through everyday interaction—like active and passive sampling or weekend tasting events.”

Making connections between suppliers and the staff is also key. “Getting staff to the farms is an invaluable experience when it comes to creating excitement,” says Salchenberg, who has visited Organics Unlimited’s banana plantations with the New Seasons produce team. “We learned so much about the process and met the people involved in growing the bananas. Staff come back energized and share their experience and produce knowledge with customers.” 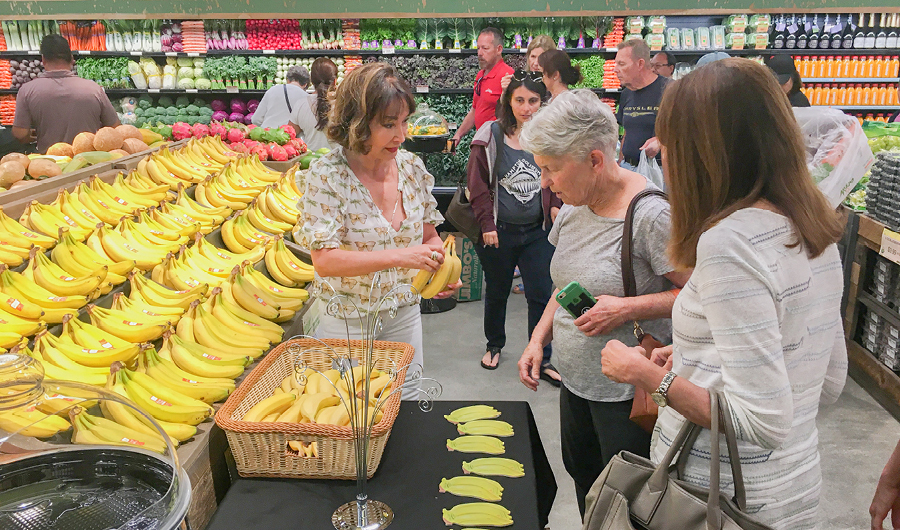 Top-selling produce imports at New Seasons include Ataulfo mangoes from Mexico. “They are a big draw for our customers, and I personally look forward to these tasty yellow beauties every year,” Salchenberg says. “I consider them to be some of the best mangoes we have all year.

“We have also had great success with Peruvian grapes this winter—both organic and conventional varieties have been excellent in quality and flavor. Our customers can’t seem to get enough of the newer varieties like Cotton Candy and the Jelly types.”

Blueberries from Chile and Mexico were also big sellers for New Seasons this winter, Salchenberg continues: “It really comes down to flavor profile and quality for our customers.”

Transparency is important to consumers who increasingly demand to know where and how their food is grown. Education and communication can bridge the miles between a farm in another country and consumers shopping at their local grocery store. “I think organic and sustainably grown produce is important no matter where it’s grown,” says Salchenberg of New Seasons, which takes pride in its organic and non-GMO produce offerings. “Not only is it better for the planet, it’s better for the people who are working on the farm and, ultimately, the consumer.”

The new signage “lets customers know about the positive impact that purchasing GROW label bananas makes throughout all the communities where GROW bananas are grown,” says Mayra Velazquez de Leon, president and CEO of Organics Unlimited. “It was a great way to show Jimbo’s customers that Organics Unlimited offers more than just great-tasting bananas.”

Organics Unlimited produces a full line of organic Cavendish bananas, along with organic coconuts and organic plantains from its farms and extensive network of growers in Mexico and Ecuador. “With retailer and distributor support, GROW organic banana purchases have provided nearly $2 million in aid since 2005,” Velazquez de Leon says. “A percentage from the purchase of each box of GROW organic bananas goes to the GROW fund, which support youth educational programs, health clinics and dental and vision care in Mexico; clean water and early childhood education programs in Ecuador; disaster relief; and environmental initiatives.”

For the first time in more than two decades, New Zealand’s Zespri International, the world’s largest marketer of kiwifruit, has launched a brand refresh for its SunGold kiwis. “We have great brand recognition around the world so we didn’t want to depart too much, but we did create something more uplifting,” says Sarah Deaton, Zespri shopper marketing manager. As part of the design refresh, a red “Z” in Zespri was added, the “fan of flavor” has been amplified and the entire package on the two-piece embossed pack is now recyclable.

In addition to increased production—moving from 73 million to 85 million trays of SunGold kiwifruit—Zespri is rolling out new sustainability goals, including 100% recyclable or compostable packaging by 2025, as well as carbon neutrality by 2025. “We see how important it is for retailers and consumers to find more sustainable packaging,” says Deaton. “And in launching the new custom design, we wanted to drive customer stop-at-shelf.”

When it comes to eye-catching in-store kiwifruit merchandising, multiple displays work best, adds Deaton. “Kiwifruit is still a little bit of an impulse buy,” she says. “It’s important that the customer can see it and find it. Retailers with two or three spaces devoted to kiwifruit within the department really helps drive sales.”

What’s more, shoppers with SunGold kiwifruit in their baskets are likely to spend 26% more than other shoppers, says Deaton.

Once considered an exotic fruit, mango is now mainstream, with consumption increasing consistently over the past five years, according to the Orlando, Fla.-based National Mango Board (NMB). In the U.S., the majority of mangoes come from Mexico, Ecuador, Peru, Brazil, Guatemala, Haiti and Nicaragua. The top six commercially available mango varieties in the country are Honey, Francis, Haden, Keitt, Kent and Tommy Atkins.

“These various varieties imported from Central and South America and the Caribbean have different and unique flavor and texture profiles, so we encourage consumers to try different varieties at different stages of ripeness and at different times of the year,” says Tammy Wiard, retail marketing manager for the NMB. “Each year more consumers become familiar with mango, and we see a steady rise in demand. At the same time, mango supplies continue to increase and are becoming more consistent. Retailers can continue to build their sales by carrying multiple varieties and sizes.”

In the summer months, Wiard sees mango sales surge when they are displayed adjacent to stone fruit. However, in the fall and winter, it’s best to place mangoes alongside citrus. Additionally, the NMB provides in-store bins to support mango sales.

“By placing the bins at the front of the produce section, the produce team can create excitement and encourage impulse buys, creating incremental sales,” says Wiard. “Our retailers have seen an aggregate lift of over 40% when using the NMB provided in-store bins.”

On the tropical front, Brooks Tropicals of Homestead, Fla., sees sales of imported papayas in different sizes, dragon fruit, fresh ginger and Dominican avocados on the move in 2020.

Ostlund further sees fresh ginger from Brazil continuing to resonate with consumers, as well as tropical avocados, which are known for their large size and creamy taste. “Driving sales is a matter of getting the biggest bang for your produce dollar,” she says. “Tropical avocados are definitely more bang for the buck, but consumers are also looking to expand their avocado taste buds. Kind of like: You don’t eat just one kind of apple. Why enjoy just one kind of avocado?”

“It’s an exciting time for grape imports, as we see the increase in flavorful varieties enter the U.S. market,” says Andy Kampa, general manager of sourcing for Robinson Fresh in Eden Prairie, Minn. Add to that the fruit’s convenient, healthy, on-the-go snacking appeal, and grapes are poised to remain a top contender in produce sales for 2020 and beyond.

This elevated eating experience can fuel repeat customers for retailers. Additionally, exciting new varieties are further driving imported grape sales. “The transition away from legacy varieties toward newer varieties is creating new opportunity,” Kampa says. “Growers around the world continue to pull out of legacy varieties and replace them with new varieties.”

Robinson Fresh, which tracks grape varieties from South America through FruitOnline, finds that Sweet Celebration and Jack Salute are two red seedless varieties that are up in year-over-year volume—by 84% and 54%, respectively. On the green seedless side, Sweet Globes are up 240%, while Timpsons are up 140%. Additionally, Maylen, a black seedless variety, is up 400%.