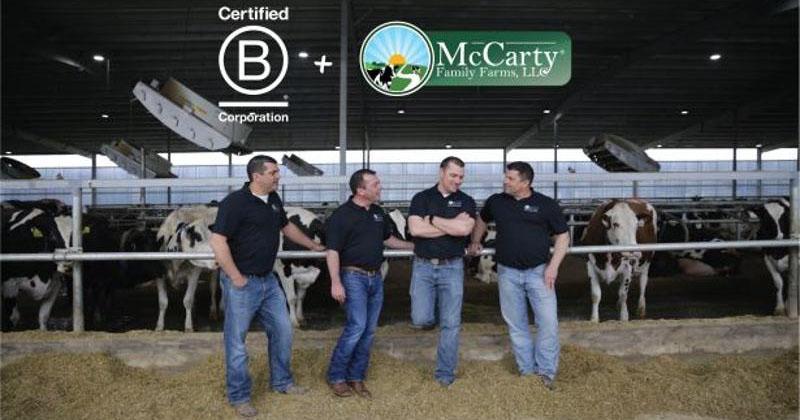 McCarty Family Farms, a fourth-generation dairy farming operation based in Colby, Kan., announced it has achieved Certified B Corporation status.

The B Corp designation is given to for-profit companies that demonstrate that they have met social and environmental standards established by the not-for-profit B Lab organization. B Lab's vision, according to the organization, is to advance an "inclusive and sustainable economy that creates a shared prosperity for all."

McCarty Family Farms, a Danone North America supplier, joins a handful of dairy operations globally to be recognized as a certified B Corp. Other certified B Corp organizations in the dairy space include Ben & Jerry's, Tillamook and Cabot Creamery. Certification must be renewed every three years.

McCarty, owned and run by brothers Mike, Clay, Dave and Ken McCarty, operates five dairy farms, a milk condensing plant and a grain storage facility. The operation earned high marks in particular for its water-conservation and soil-health practices, which focus on regenerative farming methods such as no-tillage, cover cropping and precision irrigation, according to McCarty Family Farms' website.

In a news release about McCarty Family Farms' B Corp designation, Danone North America SVP of Procurement Marc De Schutter said, "Now, more than ever, we must continue to understand and prioritize the connectedness of our agricultural and food systems, and the impact they have to our daily lives."

Only 3,500 companies globally have been designated as B Corps since 2006 among more than 60,000 that have participated in the B Impact Assessment, according to the news release.