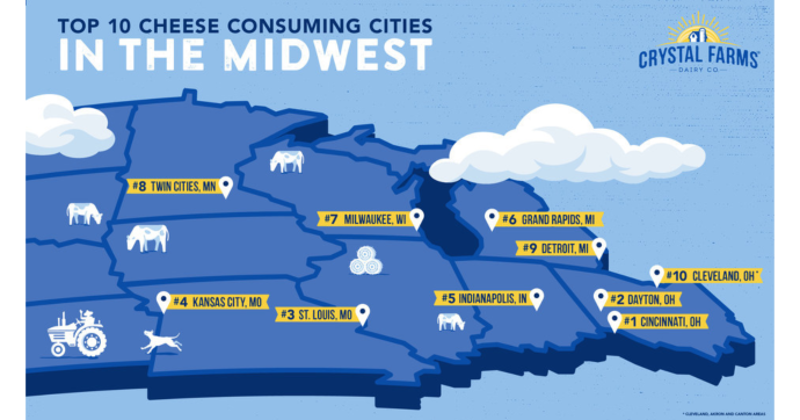 Cincinnati takes the crown as the Midwest's No. 1 cheese-consuming city, according to Nielsen data and a new ranking issued by Minneapolis-based Crystal Farms Dairy Co. Based on per capita annual cheese consumption, Cincinnati; Dayton, Ohio; and St. Louis are the region's top three cheesiest cities. Kansas City and Indianapolis round out the top five, while Milwaukee comes in at No. 7.

Crystal Farms, a Post Holdings subsidiary, shared its Top 10 list in celebration of July as National Grilling Month and in recognition of its new partnership with cheese co-op Associated Milk Producers Inc. to source 100% of Crystal Farms' milk from Midwest dairy farmers.

Less surprising than Cincinnati's top honors in the cheese-consumption category is the Midwest's distinction as the country's top cheese-buying region. Midwesterners, on average, bought 15.5 pounds of cheese per person from June 2020 to June 2021, according to Crystal Farms' news release.

"We know Midwesterners eat a lot of cheese—which isn't surprising because our region is where we believe the best cheese comes from," Crystal Farms CEO Roxanne Bernstein said in the release.

What was "gouda" for one city's cheese lovers wasn't necessarily what was "gouda" for another, the release noted: Milwaukee and Minneapolis cheese fans overindexed on string-cheese purchases, for example, while Kansas City residents preferred blue and Monterey Jack cheeses.

The full top 10 is as follows: