When U.S. consumers cleaned out grocery store shelves earlier this year in a fit of pandemic panic buying, organic produce sales saw a major spike. According to the 2020 Q1 Organic Produce Performance Report from the Organic Produce Network and Category Partners, which analyzed Nielsen retail scan data covering total food sales and outlets in the United States, organic fruits and vegetables outperformed their conventional counterparts in produce departments across the country. Dollar sales for organic produce shot up 22% in March and 8% for the quarter over the previous year.

By comparison, dollar sales for conventional produce increased 20.7% in March and 6.6% for the quarter.

“If you recall in mid-March when the country began to shut down, you had a tremendous uptick in sales during that initial panic buy,” says Matthew Seeley, CEO of the Organic Produce Network in Monterey, California. “But like anything else, what comes up must come down. By the last week of March, things began to level out, and I think as we went through the better part of April you saw some return to normalcy.”

“The real story during the panic buy was the staples,” Seeley says, “With produce, it was items like potatoes and onions that did very well.”

For Dole Food Co., based in Westlake Village, Calif., banana sales—both organic and conventional—have remained  strong throughout the crisis, and the organic fresh fruit category has outpaced its conventional counterpart. “Organic bananas are almost 14% higher in pound sales over the last 52 weeks vs. the same period last year,” confirmed William Goldfield, Dole’s director of corporate communications.

Goldfield suggests that the jump in sales may have more to do with availability than consumer preference. “This is pure speculation, but I know that during my shopping visits, the conventional products were often picked clean or at least were pretty sparse, while organic products were still available,” he says.

Though sales of packaged organic salads have remained consistent with pre-crisis business, Goldfield says, sales of fresh-packed vegetables have been sluggish. “Some retailers have reduced their organic product volumes for several weeks because they had warehouse or space issues related to COVID demand,” he says. “But demand for conventional products remained the same.”

Bakersfield, Calif.-based Grimmway Farms saw a significant increase in demand for all of its Grimmway and Cal-Organic produce in March. “Demand has been very solid for both organic and conventional crops,” says President Jeff Huckaby. “While we are seeing a dip in foodservice sales, which are predominantly conventional, increased demand for fresh ingredients at home paired with strong commitment from the organic shopper have resulted in healthy demand for produce across both segments.” 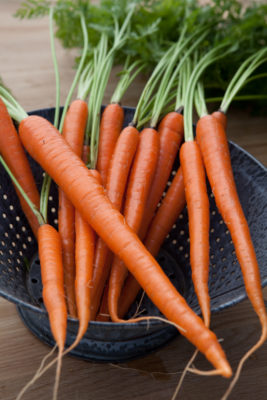 Organic carrots have seen the highest demand since the start of the pandemic, Huckaby says, and Grimmway’s newly launched fresh crop organic potato program has seen “extraordinary demand.” He anticipates a similar reception for its fresh crop organic onions. “All three of these crops are hearty and durable with long shelf lives, so they travel and store well,” he says. “Combined with their rich nutrient properties, these qualities make carrots, potatoes and onions attractive to retailers and consumers looking to stock up on supplies.”

While the company faces challenging demand for core items, Huckaby says he does not anticipate any significant shortages in the coming months.

With four locations in Northern California, Oliver’s Market is known as a go-to grocery source for organic produce. Even before the pandemic, organics accounted for about 60% of Oliver’s stock of fruits and vegetables. The pandemic hasn’t changed that, says Produce Coordinator Mike Peterson, but the retailer did see a sales surge for certain organic items including garlic, ginger, potatoes and onions—during the early days of the COVID-19 crisis.

“We were actually out of garlic for a couple days, but we’re flush now,” Peterson says. “There were slim pickings for potatoes and onions in early March, but now we’re into the beginning of May, and we have a new crop.” On the fruit side, citrus was a big seller. “We saw a big bump for oranges and tangerines—anything with vitamin C,” Peterson says. “It was kind of a blessing because we were in citrus season when this kicked off.”

With people looking to shore up supplies, Peterson also saw a spike in sales of bagged apples and citrus fruits over single-item purchases. This was unusual for Oliver’s, which normally attracts a European-style shopper who prefers to buy fresh produce as needed.

Asheville, N.C.-based Ingles Markets, with 200 grocery outlets in the Southeast, has seen increased demand for both organic and conventional produce, with neither category outpacing the other in terms of pandemic-period growth.

“Plant-based items have shown large increases, with a few companies having a hard time keeping up with the demand,” says VP of Produce Jim Ray. “The items that have increased the most are potatoes, especially sweet potatoes. Garlic, ginger and turmeric roots have also shown significant increases, causing shortages.”

When the pandemic crisis is over, Seeley of the Organic Produce Network predicts that American consumers will keep reaching for organic products in the produce aisle.

“We continue to see a bright future, and coming out of this COVID-19 situation, I think the takeaway will be that people are going to be that much more mindful of their health and well-being and ways that they can live better, happier, healthier lives,” he says. “The organic brand stands for something, and I think consumers are looking for products that they trust.”

With widespread layoffs across the country, pricing is likely to be a factor. According to the Organic Produce Network report, the trade-up to an organic item over the same conventional product averages nearly 100%—but the tide appears to be turning. “Over the past five years, we’ve seen the gap of retail pricing between a conventional and an organic product continue to narrow,” Seeley says. “That makes organics more affordable and provides an opportunity for more consumers to try them.”

Post-COVID, the biggest growth opportunities for organic produce items, Seeley predicts, are convenience products such as cut fruits and vegetables and snacks packaged for eating on the go. “These things were important to consumers before the pandemic, and I think they will come back,” he says.