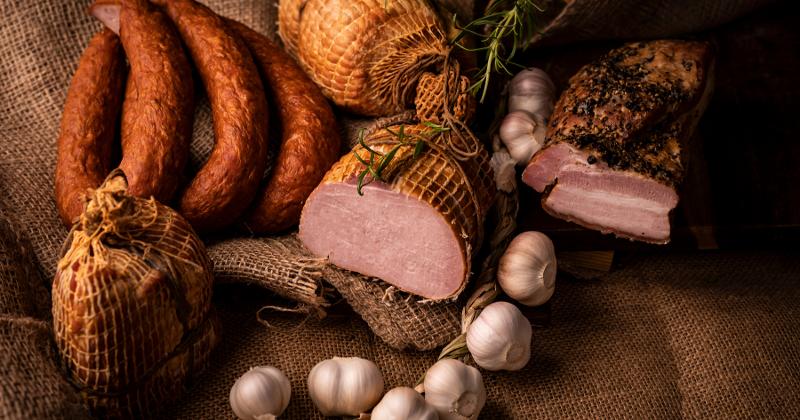 Polish producers of beef, pork and poultry have their sights set on America. While beef from Poland is not currently exported to the U.S., the U.S. is Poland’s No. 1 sales market for pork export. What’s more, the Eastern European country’s poultry producers recently got the green light to begin exporting products to the U.S.

With the goal of reaching American retailers and consumers alike through its message of “Meat with European Quality”—Poland’s Union of Producers and Employers of the Meat Industry (UPEMI), organized a press junket last month for U.S. and Canadian journalists to meet with Poland’s Secretary of State at the Ministry of Agriculture; tour the beef and pork processing facilities of Mokobody (beef) and Moscibrody (pork); attend a trade forum; and explore the array of sausages and meats at Befsztyk, Warsaw’s celebrated butcher shop.

The U.S. is an important market for Polish pork. In volume, it’s the No. 5 market for exports of pork from Poland, but in terms of Euro value, the U.S. is No. 1, with more than 58 million Euros in sales from January through September 2021, according to the Polish Ministry of Agriculture. Poland’s total pork exports are valued at over 572 million Euros.

Poland’s reputation for quality pork and beef production is more established in Europe, where it has been a member of the E.U. since 2004. “People want to buy meat from Poland. The quality story is real,” UPEMI’s Katarzyna Skrzymowska told WGB.

However, when most U.S. consumers think of meat from Poland, kielbasa likely leaps to mind. In Poland, “kielbasa” is a generic term used to denote a multitude of preparations, in much the way Americans use the term “sausage.” Increased awareness of the variety and quality of—not only kielbasa, but—the full range of pork products from Poland is what UPEMI is hoping to foster in the American market.

“Pork and beef production in Europe is a process oriented primarily towards product quality, inseparably linked to high standards of breeding, production and processing, to which we pay particular attention,” said UPEMI President Wieslaw Rozanski in a statement. “Through the ‘Meat with European Quality’ campaign, we are sharing what we do best and what we are proud of—pork and beef of unique quality, exceptional taste and versatile use.

“The quality of European meat is the result of centuries of European breeders’ and processors’ experience, but also of our constantly increased product requirements,” he added.

As a member of the E.U., Poland and its beef, pork and poultry products are held to the same standards—including animal welfare and animal rights that assure appropriate welfare for farm animals—as the rest of Europe, notes UPEMI. Breeding and production in Europe takes place in a “sustainable system that is constantly being improved,” the union adds.

As in the U.S., even in historically meat-and-potatoes-eating countries like Poland, the popularity of plant-based foods is on the rise. At November’s Food Market and Trade Forum (Rorum Rynku Spozywczego i Handluin) in Warsaw, vegan/vegetarian trends and their impact on the meat industry was a hot topic of conversation among the producers, chefs and other industry representatives in attendance.

Some in the Polish meat industry see a trend toward flexitarianism, but also premiumization. As consumers eat less meat, they trade up on quality and cuts when they do. It’s a familiar trend in the U.S., born in part by the pandemic, with consumers experimenting with new and better cuts of meat as well as exotics like lamb and bison.

“We are a meat-eating nation,” exclaimed Jurek Sobieniak, outspoken chef, restaurateur and Polish television personality during a Forum presentation. “People [are eating less meat] because it’s not trendy anymore—it’s not sexy.”

Sobieniak, whose T.V. show title translates to “I Like Meat,” is on a crusade to make meat sexy again. In his four restaurants (and a fifth that is soon to open), he turns out an array of enticing meat dishes that emphasize quality and preparation. He also emphasizes the joy of cooking with beef, pork and more on his cooking show.

“I believe that the story you tell [around meat] is one of the best seasonings,” Sobieniak told the group of American journalists gathered at a press conference after the Forum.

This story will be increasingly important for chefs, restaurateurs, grocers and butchers from around the world as inflation continues to impact meat prices across the globe. Sobieniak said he’s seen 50% higher meat prices in the last year.

But if the latest U.S. meat sales data from IRI is an indication, inflation will not stop meat lovers from continuing to crave the story and the meats they buy.