Plant-based foods may be dominating headlines lately, but when it comes to driving profit and customer loyalty, the meat case is still supreme. And though consumers are increasingly interested in exploring a variety of cuts and types of meat, poultry continues to win the popularity contest among shoppers due to its value, versatility, health attributes and convenience.

In fact, Costco—which has cultivated a loyal base of brand enthusiasts with its $4.99 rotisserie chicken—plans to open a massive chicken operation in Nebraska in 2019 to harness the supply chain to support its rotisserie chicken program. The $300 million plant will reportedly produce about 100 million chickens a year, or about a quarter of the retailer’s annual rotisserie business.

Per Capita Consumption of Poultry and Livestock

Over the past decade, consumers have increasingly been choosing chicken over other meat proteins, including beef and pork, according to the U.S. Department of Agriculture.

Overall demand for poultry is high for both fresh and prepared offerings. With more than nine in 10 consumers purchasing chicken regularly, according to a recent survey commissioned by the National Chicken Council (NCC), poultry is a proven crowd-pleaser. However, the NCC survey also found the majority of consumers (89%) crave more information about the chicken they buy and eat, including how freshness is communicated, preparation recommendations and deciphering label claims.

As such, retailers have an opportunity to drive their poultry programs higher by actively educating shoppers on nutritional value, production practices, recipe ideas and uses to increase purchase frequency and expand poultry into new meal occasions, such as breakfast or snacking.

In retail and restaurant channels, consumers are eating more chicken than ever before. The U.S. Department of Agriculture predicts that 31 billion pounds of chicken will be consumed in 2019 and more than half of that number will be purchased through retail grocery stores, membership club warehouses and similar markets—equating to nearly 95 pounds of chicken per person, up a pound from 2018 estimates.

To make the most popular protein even more profitable, retailers must focus on increasing the amount of chicken eaten during a dining experience, as well as increase shoppers’ frequency of including chicken in their meal occasions, says Tom Super, SVP of communications for the NCC.

“With the many new chicken products in recent years, the tendency has been to find more opportunities to enjoy chicken, be it breakfast, snacks or an alternative ingredient,” Super says.

Driving a total of $26.2 billion in annual sales, according to New York-based market research firm Nielsen, chicken has a value across the store that spans beyond the profits it presents as a stand-alone product. As an ingredient in other items, for instance, chicken drives an additional $9.3 billion in total store sales. What’s more, the deli department represented a rise of $305 million in dollar sales and 51 million unit sales for chicken products in the 52 weeks ending June 2, 2018, marking the highest increases of any department, according to Nielsen.

Turkey, another versatile, lean protein that’s known to soak up seasonings, is driving growing interest in nontraditional flavor profiles for deli meat, such as chipotle lemon zest or Sriracha agave turkey, says Beth Breeding, VP of communications and marketing for the National Turkey Federation. Its affordability also adds to its popularity among consumers, she says. 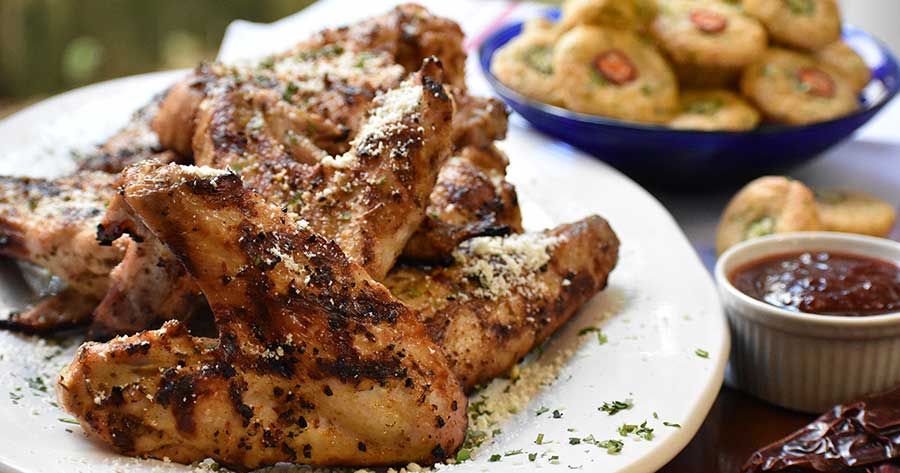 “Based on sales data from the USDA, there is a noticeable increase in the availability of turkey wings at retailers across the country, making it easier for consumers to stock up,” Breeding says. “Turkey pairs well with seasonal produce and bold spices, and retailers also have a prime opportunity to promote turkey recipes throughout the year.”

Convenience, healthfulness and value have been the foundation of poultry’s growth in consumption, but with the rise of informed and conscious shoppers, consumers today are seeking more from their poultry products.

“Successful chicken marketers and retailers must adroitly address and deliver these additional ‘needs,’” Super says. “Increasingly, consumers seek chicken that can convey a positive authentic message that includes a clean, simple label that emphasizes freshness/quality/wholesomeness; enhanced animal welfare; transparency; sustainability; and a motivation that goes beyond being a profitable company.”

Fairway Market, based in New York, has seen increased consumer interest in and focus on the antibiotic-free poultry category, says Keith Moore, director of meat and seafood. “We anticipate seeing all poultry being antibiotic-free in the future,” Moore says.

The retailer recently added a Fairway Exclusive line promoting Murray’s Omega-3 Poultry. The product is antibiotic-free and contains high levels of omega-3 fatty acids, which are introduced to the chickens through a diet of grains and vegetables. To drive awareness and interest of the product and its healthful attributes, Moore says Fairway will feature the line in its ad planner as a percent-off sale.

Similarly, turkey producer Butterball, Garner, N.C., introduced its line of All Natural products, featuring a redesigned packaged to draw shoppers’ attention. Featuring fresh raw items such as ground turkey and turkey tenderloins, as well as fresh whole turkey and fully cooked breakfast sausage, each product is made with only natural ingredients and is free of nitrites, nitrates and gluten. 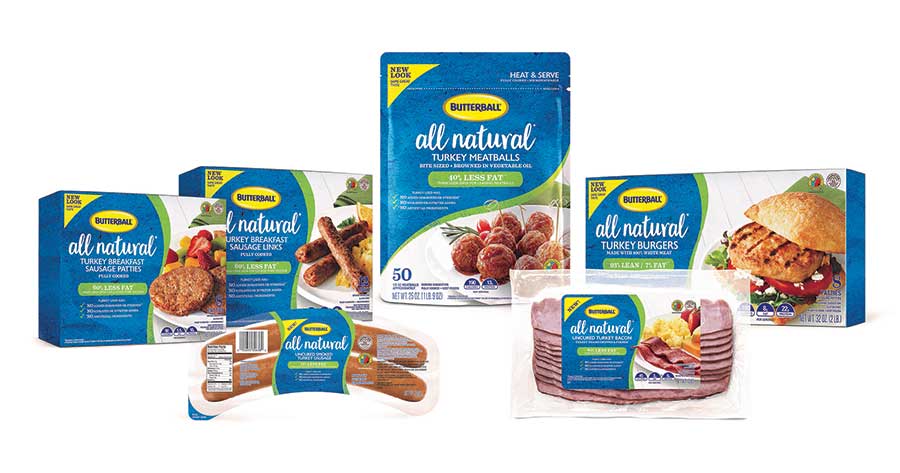 “[Consumers] want more transparency and cleaner turkey products, and they don’t want to trade taste to get it,” says Kyle Lock, senior director of retail marketing for Butterball. The company also offers its Farm to Family by Butterball brand including natural, organic and antibiotic-free turkey products, and has partnered with the American Humane Association to certify that all of its turkeys are humanely raised. “The seal is carried on all of our Butterball retail grocery products, indicating our dedication to raise turkeys the right way and to hold ourselves accountable to high third-party standards,” Lock says.

In addition to offering products and resources that align with consumers’ values and demands for transparency, retailers and poultry producers must also provide tools and information to educate shoppers about poultry’s nutritional value. As consumers increasingly seek to lead healthier lives, protein is a top priority when selecting the foods they eat. Yet, according to Nielsen, just 38% of consumers consider chicken a high-protein food, while nearly 32% thought peanut butter was high in protein. Today, 42% of consumers said they consider chicken to be high in protein, marking just a modest improvement.

With the rising popularity of plant-based proteins, which saw a 30% increase in sales last year, according to Nielsen, retailers and suppliers have an opportunity to tap into the protein-hungry demographic by highlighting poultry’s high protein content through packaging callouts, in-store signage and online resources.

“The main thing retailers can do to increase interest and consumption is to continue to educate the consumer through shelf talkers, recipe cards, signage and knowledgeable employees,” says Lou Papa, meat director of merchandising and operations for Krasdale Foods, White Plains, N.Y. The grocery distributor says it has been working with Perdue Farms and Shady Brook to promote and feature their new lines of antibiotic-free and organic items through smart packaging, product cost and marketing initiatives.

On a related note, Super of the NCC suggests companies adopt programs to feature quick response (QR) codes on their fresh and prepared chicken products to effectively communicate everything from the product’s farm-to-table story and recipes to nutritional value and deals or coupons.

“With the chicken industry being essentially 100% vertically integrated, marketers are in a much better position to tell the complete story when compared with other animal proteins that may change hands a few times before the consumer can buy it,” Super says. “It is recognized that supermarket meat departments prefer to keep their section of the store somewhat free of signage and posters. However, it may be time to have an attractive sign in the meat department that says: ‘Our chicken is farm fresh and natural,’ with a QR code on the sign for more information.”

On the heels of its recent national survey revealing that 90% of consumers are interested in deeper information about the chicken they buy and eat, the National Chicken Council (NCC) in July launched a series of 360-degree virtual reality videos showing the various stages of a chicken’s life during modern, commercial production. The new experience is part of NCC’s Chicken Check In program, which serves as a resource for consumers to learn about how chickens are raised.

According to the NCC survey, 40% of consumers indicate that information about “how chickens are cared for” is one of the topics they are interested in most. The NCC’s virtual reality experience was designed to provide insight on just that, featuring three 360-degree video segments that follow chickens’ lives from the hatchery to the broiler chicken farm to the processing plant:

“We know that people want more information about chicken production and that most have not visited a chicken farm, so we are bringing the farm to them,” said Tom Super, SVP of communications for NCC, in a statement. “Through our virtual reality tours, viewers are able to see the way most chickens are hatched, raised and processed in the U.S.—it’s a fully immersive experience.”