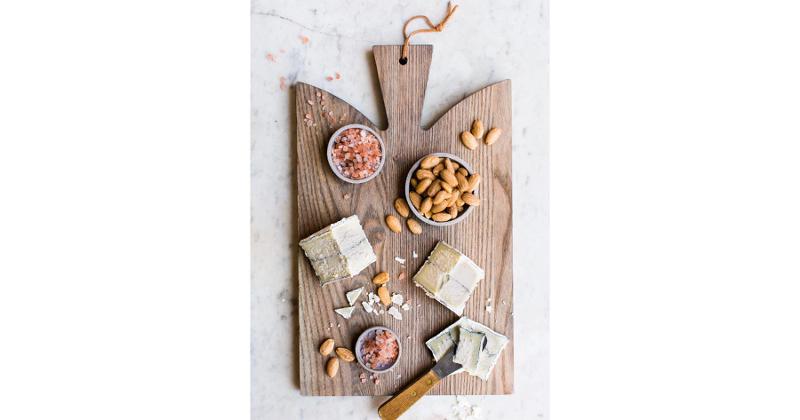 Healthy indulgence—one of the hottest food trends this year—will undoubtedly influence entertaining and gift giving this holiday season. Shoppers seeking flavorful yet festive ingredients, party trays, baskets and more will look to the produce department to provide a one-stop shop for all their celebratory inclinations.

At the start of the season, Harps Food Stores Inc., Springdale, Ark., transforms its produce departments into destinations for easy entertaining and gift giving under a healthful holiday halo.

“We do a huge tray sale—vegetable, fruit and nuts—in mid-December when everyone is having holiday parties,” says Mike Roberts, director of produce operations for Harps.

To offer shoppers added convenience, Harps cross-merchandises its fruit and veggie trays with meat and cheese trays in the produce department. Each tray is paired with a dip: The vegetable tray comes with a veggie dip, the fruit tray comes with a cream cheese dip and the apple tray has an apple dip. “Overall, our holiday fruit and vegetable trays generated a lot of extra dollars for the produce department,” says Roberts of last year’s sales.

For customers who want to create their own holiday baskets or are entertaining a crowd, Harps puts 5-pound boxes of clementines and 8-pound bags of apples, oranges and grapefruits on display. Baking nuts are another holiday staple in the retailer’s produce departments.

“Where possible, we build our holiday displays in the center of the produce department,” says Roberts.

Harps is well-versed in its shoppers’ seasonal preferences and is mindful to remain well-stocked on key produce items during the holidays, including russet potatoes, sweet potatoes, celery, shallots, boiling onions and cranberries. Harps also offers premium items, such as 3-pound bags of Dutch potatoes from Melissa’s Produce. “While we’re traditional, we also like to give ideas on more upscale approaches,” Roberts says.

Fresh cranberries have long been a staple of Thanksgiving gatherings, but grocers have an opportunity to leverage the nostalgia of this flavorful fruit for the entire holiday season.

“Providing healthy holiday recipe cards in cranberry displays, with the ingredients involved in the recipe nearby, can be impactful and also increase sales,” says CarrieAnn Arias, VP of marketing for Naturipe Farm. “In-store demos are also an option to show shoppers how to create holiday-themed decor [using cranberries].”

With the U.S. market for plant-based foods booming, some shoppers are bound to seek out these options for their holiday meals.

“Sixty percent of shoppers say they are more likely to include at least one plant-based main dish on their holiday table this year,” says Alex Berkley, director of sales for Los Alamitos, Calif.-based Frieda’s Specialty Produce, citing data from C+R Research, Chicago. “Grocers can capitalize by carrying and merchandising more high-quality, specialty produce this holiday season, because nearly 64% of shoppers agree that it’s worth paying more for specialty fruits and vegetables, especially when cooking for the holidays.”

Frieda’s anticipates that Stokes Purple sweet potatoes will be its top-selling item this holiday season, with other hot sellers to include shallots, Cipollini onions and white pearl onions. The specialty produce supplier will offer a limited-time holiday packaging of its pearl onions this year.

“To get consumers excited, [try] merchandising holiday items next to traditional items, such as Stokes Purple sweet potatoes next to orange sweet potatoes,” suggests Berkley. “Based on our research, we have found people are willing to trade up to the new, trendy products but sometimes need to see the items next to what they are familiar with to get them to pick it up.”

A Penchant for Premium

Jim Beagle, CEO of Shafter, Calif.-based Grapery, says good displays are key “as new trial is the biggest challenge in the premium grape category. “You have to break through the hurdle of, ‘Why should I pay a little more for this?’” he says.

Grapery, which conducts promotions through Thanksgiving, is launching a new Galactic Giveaway for its Moon Drops grapes. The promotion Giveaway invites shoppers to submit the proof of purchase from three grape bags in exchange for Grapery T-shirts and more.

“We offer POS signage for retailers, as well as support on whatever they need to create customized signage,” says Beagle.

As consumers increasingly seek local products, particularly in the produce department, the demand for regionally sourced fruits and vegetables remains high during the holiday season; however, the weather in most parts of the country doesn’t support this trend. But this is where the burgeoning greenhouse-grown produce market in both the U.S. and Canada offers a solution.

“Retailers have had great success with our winter program, particularly when they’ve used in-store signage, social media and weekly flyers to advertise local products during the colder months,” says Stephen Cowan, key account manager for Mucci Farms. “There’s no secret to success other than to make consumers aware, because ‘locally grown’ truly sells itself.”

“In prior seasons, we’ve loved how retailers get creative with these POS displays, making them holiday-themed by adding garlands, ornaments and even lights—which surely helps grab added consumer attention,” says Adam Cooper, senior vice president of marketing for The Wonderful Co., Los Angeles.

Wonderful Halos, which has planned multiple free-standing inserts for pre- and post-Thanksgiving, finds that in-store displays and signage in unexpected areas of the store help drive impulse purchases.

This holiday season, Blue Diamond’s main retailer initiative is centered around gift-giving. The campaign encourages consumers in search of quick, flavorful and healthful holiday gifts, to pick-up a bag of Blue Diamond Gourmet Almonds and “put a bow on it.”

Whether it’s a hostess gift or stocking stuffer, Blue Diamond aims to take the stress out of holiday gift-giving this year. The Sacramento, Calif.-based company is calling this holiday season #hackmas, as purchasing Blue Diamond Gourmet Almonds helps consumers “hack” the holidays.

The Blue Diamond #hackmas campaign is slated to appear throughout November and December through in-store demos, displays and floor talks at the end of the snack almond aisle, as well as in digital and social advertisements.