Prices for food in U.S. grocery stores ticked up slightly in June behind increases for some packaged goods, new figures from the Bureau of Labor Statistics indicate.

The bureau’s Consumer Price Index for food-at-home, a proxy for U.S. supermarket inflation, showed overall prices increased by 0.2% in the period, following deflationary conditions in May, when the index declined by 0.2%. On a year-over-year basis, the index shows grocery prices are up by 0.4% from the same period last year. 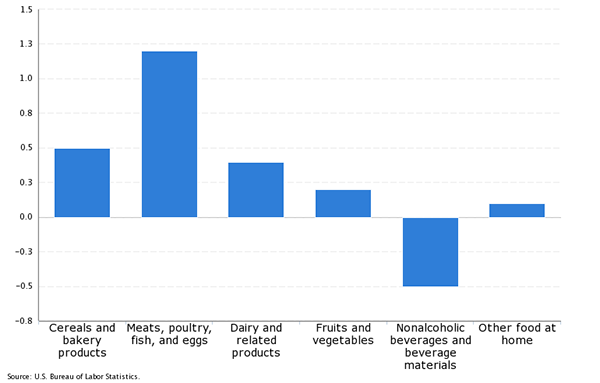 Five of the six major grocery categories showed price increases in June, led by a 0.6% gain in the index for cereal and bakery products—that category’s largest gain since October 2015. However, proteins—particularly eggs and pork—and fresh vegetables saw prices dip during the month, making June a mixed bag for food retailers counting on inflation to improve sales.

The index for meats, poultry, fish and eggs declined in June, falling 0.6%. The decline largely reflected a 7.1% decrease in the eggs index. The index for pork also declined, while the indexes for beef and poultry increased.

In the past 12 months, five of the six major grocery store food group indexes rose, although meats, poultry, fish and eggs (up 1.2%) was the only one to increase more than 0.5%. The index for nonalcohol beverages was the only one to decline over the year, falling 0.5%.