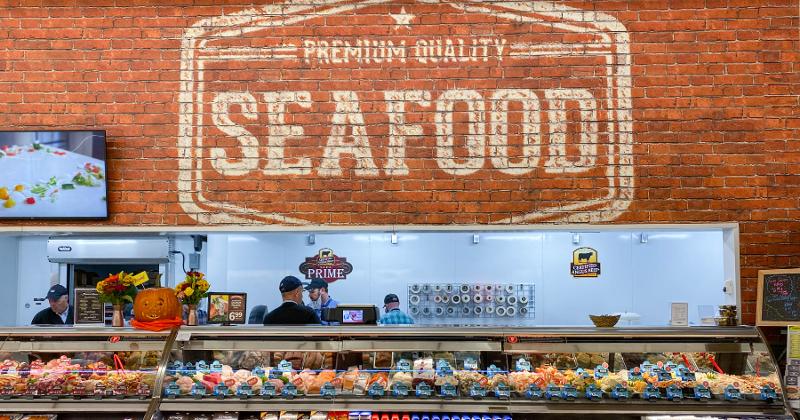 Consumers continue to reel in fresh seafood in grocery stores.

Traditionally not the best-selling protein, fresh seafood saw its popularity soar in 2020 as consumers were limited to cooking at home with restaurants closed to indoor dining. Even for those restaurants offering takeout and delivery, seafood was far from a go-to choice for diners.

“People either had to go without or overcome their confidence barriers to prepare seafood at home,” says Anne-Marie Roerink, principal with 210 Analytics, based in San Antonio, Texas. “And the latter is exactly what happened.”

Despite higher prices relative to other proteins for some seafood choices, home cooks were willing to take the risk of making mistakes. “Often people would want to try things for a special meal, but because it was only family, they were willing to risk it,” says David Owen, owner of De La Mer, a chain of four seafood markets in Toronto.

And now, almost two years after the COVID-19 pandemic began, sales of seafood have dropped from their mid-pandemic highs but continue to be strong. Sales of fresh seafood were up 9.6% for the 52 weeks ending Oct. 3, 2021, in grocery, drug, mass market, military and select club and dollar retailers, according to IRI Integrated Fresh, a Chicago-based market research firm. Overall, reports IRI, fresh seafood sales are about 30% higher than in 2019.

Fresh seafood in particular has seen big gains during the pandemic, especially against frozen options, according to Mintel. Part of this results from consumer concern about the quality of frozen fish—a concern 60% of shoppers hold, Mintel reports.

At Abingdon, Va.-based K-VA-T and its Food City stores, sales of both fresh and frozen seafood remain strong, with continued double-digit increases over 2020, on top of a 40% increase in 2020 over 2019. Fresh seafood represents about 40% of the company’s seafood sales.

Shoppers like to see the freshness, says Steve Holloway, director of meat/seafood operations with K-VA-T, but they also like buying fresh because they can interact with the fishmonger.

The hands-down winner in fresh seafood is salmon. “Everyone loves salmon in all of its forms,” says Owen of De La Mer, who sells net-pen-farmed Atlantic salmon. If you don’t carry salmon, he says, “it’s hard to start a conversation with somebody about other options—they’ll just walk out if I don’t have it.”

Shrimp also resonates well with North American shoppers, says Roerink, as do more value-focused whitefish varieties such as tilapia and cod. But a surprise came last year when premium seafood items took off as consumers started hosting celebratory and special meals at home.

In fact, according to NielsenIQ, caviar, lobster, snapper and fresh tuna all saw double-digit sales gains in the 52 weeks ending on Oct. 10, 2021. Other fresh products that also saw double-digit growth were salmon, octopus/squid, snapper, mahi mahi and grouper.

Sustainability matters to consumers, but there’s a disconnect across generations in fresh seafood given that baby boomers are the category’s top spenders but younger consumers express more interest in responsibly sourced options.

In light of this, Roerink expects that sustainability will become more important in the fresh seafood category. Category growth “is much higher among millennials,” she states. “That means sustainability is going to be an issue of rising importance.”

There’s also confusion as to what sustainability means for fresh seafood.

Owen says that among the common questions he hears are: “Is this fresh or farmed?” and “Do you carry wild organic salmon?”

The fins-down best way to educate shoppers about sustainable seafood, he says, is verbally. “I’ve never found any resources to take the place of people talking to us,” he says. “We can give them alternatives, so we can often widen their palate in terms of what they’re willing to eat and willing to try. And the more variety we eat, the more sustainable the whole practice.”

Owen uses signage to indicate which of his products are sustainable and uses Ocean Wise to show what that third-party organization recommends. He also has Ocean Wise literature and point-of-sale information available and uses social media, especially videos, to discuss seafood sustainability.

Having a partnership can add credence to a retailer’s sustainability program via strong third-party certifications, Roerink points out, but retailers can also develop their own initiatives and metrics in support of their values.

At K-VA-T, “We’ve recently added seafood sustainability to our in-house eco committee to ensure that we have the opportunity to better understand important issues around sustainability and seafood,” says Holloway. “We’re working with several suppliers on items that have QR codes on packages to help tell the story, from fisherman to boat all the way through the system,” Holloway adds. “This is an area we will continue to grow and evolve.”

K-VA-T customers mostly commonly ask questions about cooking and recipes. Secondly, says Holloway, they want to know when a product arrived and its country of origin. “Good, knowledgeable associates behind the counter are great for providing information along with brochures to hand the customer,” he says.

Presentation is where fresh seafood can really shine when compared with frozen products, which are typically covered in plastic.

Owen’s top tip is to display fish to look as nice as they would on a plate. Keep lines straight and add interest by alternating skin side up, skin side down “to make it visually interesting,” he says. Owen adds that he also likes to lend color to the display case with citrus fruits and colorful jarred products that can be safely displayed alongside the fish. “Treat the display cabinet like a plate,” he says.

Displays can also be a value-add for consumers, Roerink points out. Retailers can place the seafood in a tray in which it can be cooked; shrimp can be offered on a kebab that is ready to grill; and salmon can be sold on a cedar plank. Winn-Dixie, she points out, even has a small section with cut vegetables “so people can create a ready-to-cook package with their favorite combinations.”

Holloway agrees that “presentation is key to selling.” His No. 1 tactic is having a full and very fresh case with no garnishing beyond some kale sprigs. “We really let the product speak for itself.”

“Because people have less experience preparing [seafood], they also don’t have as much experience in creating a meal around it,” Roerink points out. “Providing recipes and cross-merchandising ideas can be a great way to not only win a seafood basket but win the entire dinner.” Wine can be a good add-on, as seafood is often considered a special meal, and fresh seasonal vegetables as well as lemons and limes are good bets as well.

K-VA-T features a display rack in every store close to the seafood service counter that’s stocked with spices, rubs, boils, marinades, breadings and other relevant items.

For stores offering value-adds, complementary items and a knowledgeable employee working the seafood counter, there’s no reason that seafood sales should go anything but swimmingly.