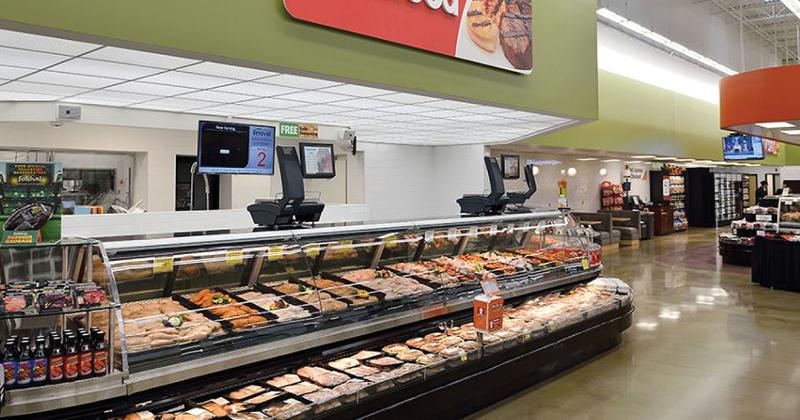 Pork is having an identity crisis. Prices are down, yet sales are fairly flat, so retailers that are selling this meat are getting creative.

This seven-store chain has a Thyme Savour Meals section in its meat department, where it offers items such as ribs with dry rubs (such as barbecue and chipotle, its top sellers) and marinades; pork chops with stuffings such as sausage or sweet chile and pineapple; and honey Dijon tenderloin. Most of these dishes can be cooked at home in less than 30 minutes.

Geissler’s also merchandises the dry rubs and marinades near the fresh meat. Both come in private label versions, and the stores also carry a local restaurant’s rub.

Value-added pork outsells commodity “because people want something different but don’t want to do the work,” says Mike Zimmerman, senior meat and seafood director for Skogen’s Festival Foods, Onalaska, Wis. These stores offer marinated pork chops and pork loin, as well as ribs on a stick, which feature boneless pork loin with skewers and are a signature item, Zimmerman says. All are offered plain or with marinades such as chipotle, smoky apple, lemon pepper and rubs, such as Southwestern.

And at West Valley City, Utah-based Harmons, marinated skewers, which come in 24 different flavors, do well, and so does marinated pork tenderloin on a skewer. “Value-adds drive sales,” says Chris Smith, sales director of meat, meat deli and seafood. “It’s all about convenience.” 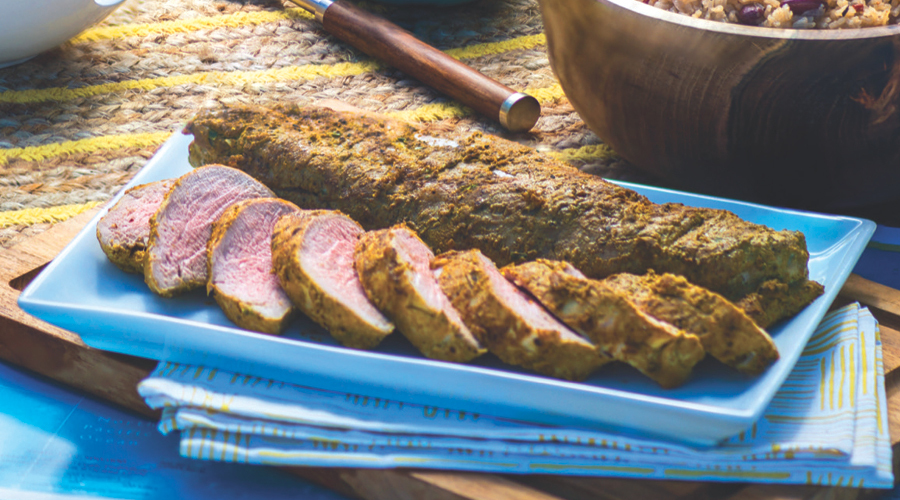 Value-added vs. regular pork items appeal to different consumers, says Anne-Marie Roerink, principal with 210 Analytics, San Antonio. In general, pork sales skew to older consumers, who prefer to season and marinade the meat themselves, she says. Value-added products, however, appeal to younger customers. “I’d say in urban stores catering to younger shoppers, careful exploration could be interesting to see if this is the gateway to the millennial heart,” she says.

These products “make consumers’ lives more easy,” which draws younger consumers to the category, says Patrick Fleming, brand specialist for Chicago-based Midan Marketing and former director of market intelligence and innovation for the National Pork Board.

“The bulk of pork consumption tends to be older people, but with marinated or rubbed you can get new flavors that are on-trend and appealing to millennials,” he says. “It allows them to experiment with pork. It’s about promotion, innovation and new flavors.”

Overall, pork sales are “steady,” Smith of Harmons says. “It’s a tough sell; chicken and beef are the drivers. It’s gotten better over the past few years, but it’s the population’s perception that pork is perhaps not as versatile and less healthy.”

According to New York-based Nielsen, pork continues to grow in popularity. For the 52 weeks ending May 25, pork sales were up 1.3% to $19.2 billion, while overall poundage was up 0.2% to 5.48 billion pounds. Pork was the only major protein that saw volume growth in pounds during that time. Chicken sales were up 0.6%, and beef sales were up 3%.

The sales increase in pork, however, was driven by ham and bacon, up 48.4% and 1.2% respectively, while fresh pork sales were down 5.5%, Nielsen figures show.

Americans are eating more pork, says Fleming, and 2019 “will be the largest year for pork production and pork consumption for quite a while.” This year, 52 pounds of pork will be consumed per person, which is up from 51 pounds last year and 50 the year before that, he says, citing the U.S. Department of Agriculture.

As for what type of pork sells, the most popular cuts depend on the time of year.

At Harmons, boneless pork loins are the sales drivers, but in the summer months, it is ribs, with baby back and St. Louis-style doing well. As fall progresses into winter, the chain sells more roast cuts (Boston butt or pork shoulder), and for the holidays “it’s all about hams,” especially spiral sliced, Smith says.

At Festival Foods, ribs sell well year-round, and boneless loin cuts and pork chops are also popular. At Geissler’s, ribs are also a summer mainstay, particularly baby back, St. Louis-style and country style ribs off the pork loin, as well as center-cut chops for the grill. Rib sales slow in the winter, but the center cut chops still do well. Geissler’s stores offer packs of assorted pork chops, with two rib end chops, two sirloin end chops and two center-cut chops. These cost $1.49 to $1.99 per pound, or up to $2.99 per pound as a non-sale price.

The interesting thing about pork is that many cuts, namely bacon, ham and sausage, aren’t thought of as pork by the consumer, says Roerink of 210 Analytics. Processed pork products constitute the majority of sales, with 96% of U.S. households buying processed and 77% buying fresh, she says, citing data from InfoScout. Overall, 97% of U.S. households buy pork on an annual basis.

“That means there is a lot of overlap between the two households,” she says. “In terms of sales, that translates into 70% of the total $20.1 billion in pork sales being generated by processed pork, with top sellers being bacon, sausage, cold cuts and ham.”

On the fresh side, Roerink says pork chops are the biggest sellers, closely followed by pork ribs and pork roast. Pulled pork continues to be popular, and blended ground pork/beef is gaining traction, “especially for hamburgers, to provide a different texture and taste,” she says.

The great thing about pork “is that we have cuts that appeal to nearly every need,” says Jason Menke, director of marketing communications for Des Moines, Iowa-based National Pork Board. “Consumers looking for indulgence are drawn to bacon and sausage. Consumers looking for healthy options can find seven whole-muscle cuts that are classified as lean, and two cuts—pork tenderloin and pork sirloin roast—are certified ‘Heart Healthy’ by the American Heart Association.”

"Overall, ribs and shoulders are seeing steady to growing sales due to increased interest in barbecue and smokers, and technology such as pellet and disc/puck smokers has made it easier for consumers to create consistently great barbecue,” Menke says. “Both ribs and pulled pork are inexpensive crowd pleasers,” he says.

Having knowledgeable butchers goes a long way toward boosting pork sales. “As people become better educated and don’t overcook pork, it tastes better and they’re buying more,” says of Nilsson of Geissler’s. Geissler’s has an in-store kiosk featuring recipe and cooking instructions, which shoppers can print out. The kiosk is typically located near the meat case.

The problem is younger consumers are not engaging with cuts such as roasts and ribs as much, says Roerink, who believes they’re looking for quick tips, recipes and inspiration more than general education.

“There is an odd dichotomy in food, where shoppers want variety in their meal lineup yet they tend to buy the same old. This is definitely true for pork,” she says. “If we can inspire a new dish, a new preparation method or a whole other cut to shoppers’ repertoire, we have a lot of upside.”

Another problem is most people tend to overcook pork. “It’s much more juicy and tender when not overcooked,” Fleming says. “It’s about encouraging people to experiment a little, as pork is so versatile, and that makes it a bit easier for people to put a little twist on what’s on their routine. Sometimes people are just looking for that nudge.”

Festival Foods’ customers mostly want to know how to prepare and cook pork, but they also have questions about what to serve it with and how much they need, Zimmerman says.

He makes sure to merchandise value-added products inside the service counter “so the team can talk to people about the flavor profile and how to cook it.” The other pork products are self-serve.

He’s also trying to feature more meal tie-ins to boost pork sales, with ingredients such as spaghetti nearby or all the ingredients for a BLT near the bacon, “so the customer doesn’t have to hunt all over for them. You have to make it easy; everyone’s crunched for time and people don’t have any patience.”

An enthusiastic, knowledgeable meat associate “can make all the difference” when it comes to pork sales, especially given consumers’ lack of experience with this meat, Roerink says. “It’s not just technical knowledge. It’s being able to give shoppers tips and the comfort that they can to prepare pork dishes successfully,” she says.

The National Pork Board has found consumers are interested in Instant Pot and sous vide recipes and instruction, so it created YouTube videos to help. “When you give consumers the confidence to cook pork properly and the knowledge that a chop with a rosy center is safe and enjoyable to eat, they’ll eat it more often,” Menke says.

Promotions can also boost pork sales. “Price remains king in consumer decisions,” says Roerink, who believes sales are the way to go because many shoppers aren’t interested in volume offers like buy one, get one free. “For this same reason, family packs don’t work for smaller, more lower-income households. At the same time, there is no bigger distraction from trip satisfaction than being out of stock on items that are on promotion, so making sure operations are aligned with promotional demand is crucial.”

“Fresh pork gets a lot of front-page coverage in the weekly circular, given its favorable price point,” but it is not necessarily a great decision, Roerink says. “If you figure that the average household only purchases fresh pork seven times a year, this decision doesn’t always pay off and retailers may be better served advertising higher-frequency items to drive ad behavior.”

Frequency of promotions is very important to pork, says Fleming. Stores, he says, “want to remind people, nudge them that pork is successful.”

But good merchandising in the case can also help. He advises offering suggestions such as “Great for the grill” or “Great for the slow cooker.” And ribs can look intimidating, “so offer some simple steps on how to prepare them. Even if customers don’t use your recipe, it will get them to the purchase and then they can go home and research other options,” Fleming says.